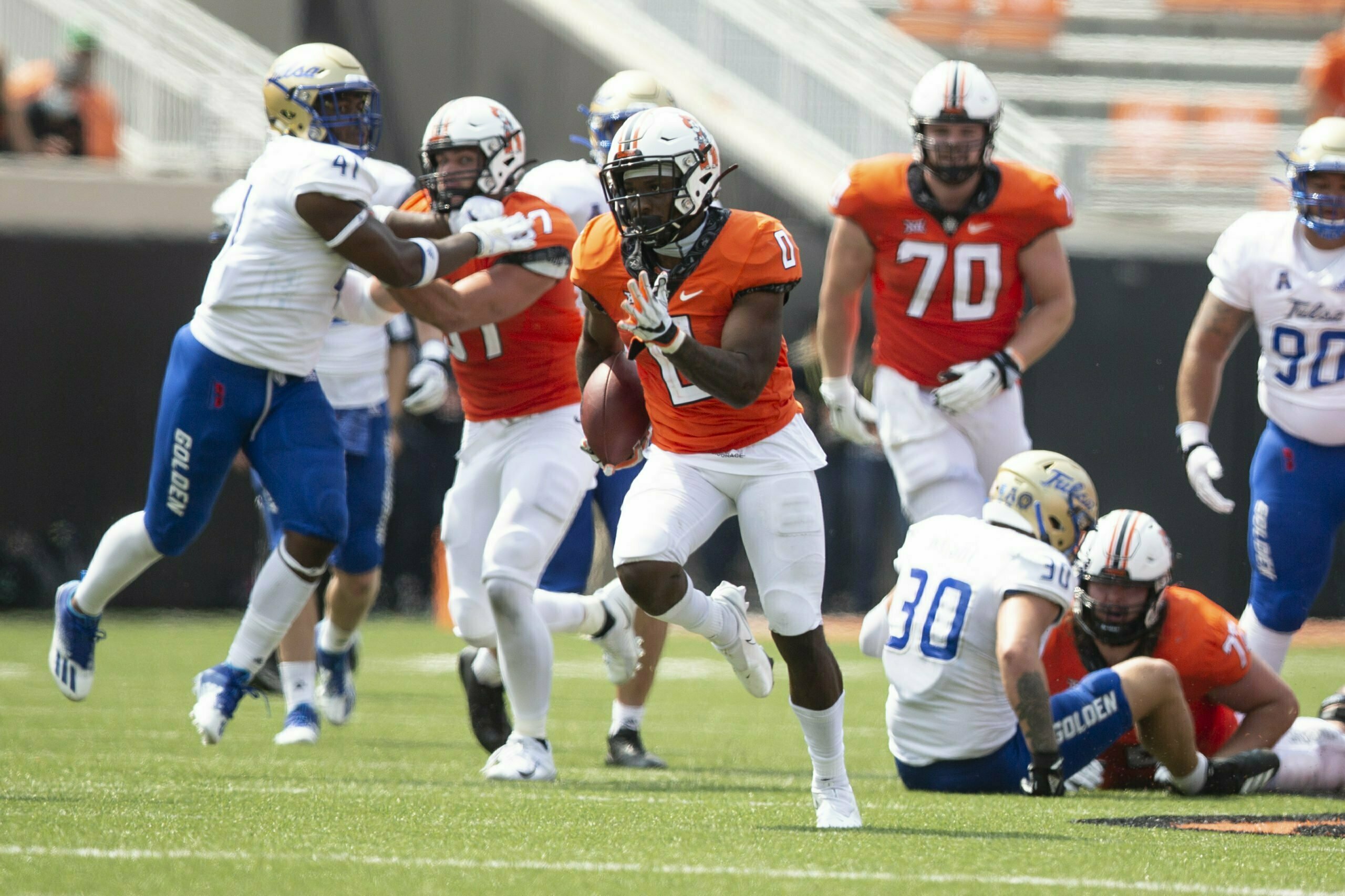 Justice Hill, J.D. King and LD Brown each had solid outings that season. Hill was the featured back and led the way with 1,467 yards and 15 touchdowns that year. King finished the season with 469 yards and four touchdowns, and he shined against West Virginia, running for 142 yards. Brown had a 92-yard performance against Tulsa and ran for two scores against Kansas, finishing the year with 223 yards three touchdowns.

Brown was OSU’s third back (behind Hill and Hubbard) in 2018, and in 2019, he got just 40 touches to Hubbard’s 328. But if Saturday’s game against Tulsa is any indication, Brown could be in for his biggest year as a Cowboy yet.

“LD played his best game in all areas,” OSU coach Mike Gundy said. “In pass protection, he stepped up and hit people in the face. When he had the chance to rush the football, he ran extremely hard, and he did a really good job with ball security. I told him that. I was thrilled with him. He played better and more aggressive and had more fun in that game than he had in his career here.

“His [chances] will be increased with that. You run hard, you take care of the football, and you’re willing to pass protect and play hard like he does, you’re gonna get to play in a lot of plays. That’s what he was told after the game, and we’re expecting him to play more in the next game.”

Brown was a shot of life in a season-opener where OSU’s offense struggled. He ran for 63 yards on nine touches. He averaged 7 yards a carry in a game where the Cowboys averaged 2.8 yards per touch as a team.

It’s a small sample size, but Brown looked as good as he has in Stillwater, but what has changed?

“Gaining weight, that’s weird to say, but just trying to maintain to play over like 200 pounds,” Brown said Tuesday. “I’ve never did that in a season. If you’re more physical and bigger, you can take more damage. I just concentrated [during the offseason] on gaining weight, gaining muscle mass.”

He was a speed back coming out of DeSoto in 2016. He was clocked with running a 4.43 40-yard dash in high school. Speed is still one of his valuable assets, but him add the extra weight allows him to diversify his game.

Brown is also a hard guy to dislike. He met with reporters over Zoom on Tuesday, where he cracked a smile and thoughtfully answered questions before thanking media members by name after their questions.

“If you don’t like LD, something is wrong with you,” OSU wide receiver Dillon Stoner said. “He is one of the most likeable dudes on the team. Everyone respects that guy, so everyone loves to see him be successful on Saturdays.”

It was just one game, but Brown’s play Saturday already has people in higher places inquiring. Jim Nagy, the executive director of the Reese’s Senior Bowl, tweeted out that Brown is “now on the radar.”

At the end of the season Brown will also be tasked with an interesting decision. He is a redshirt senior and has been in Stillwater since 2016, but with the NCAA’s ruling that this fall won’t count toward athletes’ eligibility, Brown could come back for a sixth year.

It’s likely Hubbard will make the leap to the NFL after this season, meaning after waiting his turn behind Chris Carson, Hill, King and Hubbard, Brown might finally get a chance to be OSU’s featured back. That is, if he still needs to come back for another season.

“You gotta think, ‘Man, this is probably my last chance,'” Brown said. “Of course, everybody gets this year back. … I took this away from CC a long time ago, Chris Carson, who is with the Seattle Seahawks, just put something on tape. That’s just the mentality you have to have with everything you do. Just showing teams you can do stuff.”