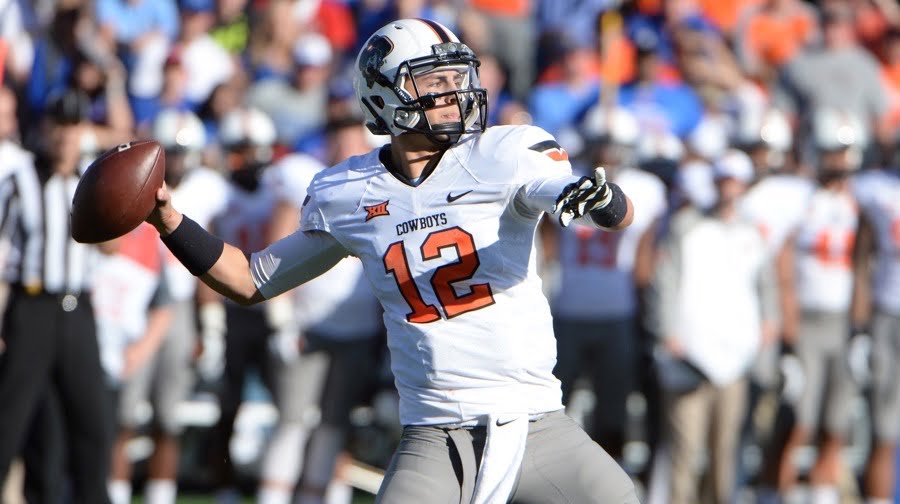 True story: On Friday night I had dinner with the former head man of CRFF and a longtime Internet friend of mine, Robert Whetsell.

We met at a burger joint here in Dallas to catch up on life, our families and talk about the state of OSU athletics.

We were discussing each of our OSU blogs (what a world we live in that there are two different web proprieties that discuss Oklahoma State athletics, btw) and he causally mentioned Daxx Garman potentially transferring.

I thought he was kidding at first because I’d been so wrapped up in golf things on Friday that I completely missed it. All that to say I’m sorry these thoughts are so late.

The genesis of all of this was an unfortunately-spelled tweet that insinuated Daxx Garmin was transferring from someone who calls herself Coach E that’s me.[1. The Internet…] If you’re going to blow the lid off some QB news at OSU…

CRFF picked it up, CBS picked it up (hey, there’s my editor!) and off to the races we go.

I believe Daxx Garman is going to transfer for a myriad of reasons, these three being the most important:

Oklahoma State is normally quick to snuff the smoldering wick of rumors floating around the web but in this case its only response to the tweet and subsequent posts from CRFF and CBS was “this will be addressed next week.”

Somebody who knows a lot of Daxx things[1. To the point that he emailed to tell me that Rudolph was starting because Daxx was concussed before anyone knew it was actually happening.] emailed me recently to confirm that, as of this weekend, Daxx was transferring.

Could that change by March 9 when Gundy holds his press conference?

Yep, it could. But I’m guessing it won’t.

We’re talking about someone who has played for four different teams since his junior year of high school. Somebody who’s a senior and could likely pull a Jeremiah Masoli and transfer somewhere with a grad program OSU doesn’t offer and potentially play out his last year of eligibility.

Plus, what’s the upshot of staying other than the probability that if you’re not a walk-on and you play QB, you’re probably going to play the position at OSU at some point in the year if the last few seasons are any indication?

If you don’t feel an affinity to OSU, then why bank on No. 10 and No. 4 going down so you can pull a Cardale Jones and whisk the Fightin’ Boones into the College Football Playoff?[1. John Kolar is sitting in his dorm room somewhere, watching Peyton Manning film, smiling.]

Could he still flip and be a Cowboy when spring camp breaks in April?

Sure. But I don’t think it’s likely. And as my source noted, if he leaves, he’s going to need a U-Haul for all that swag.