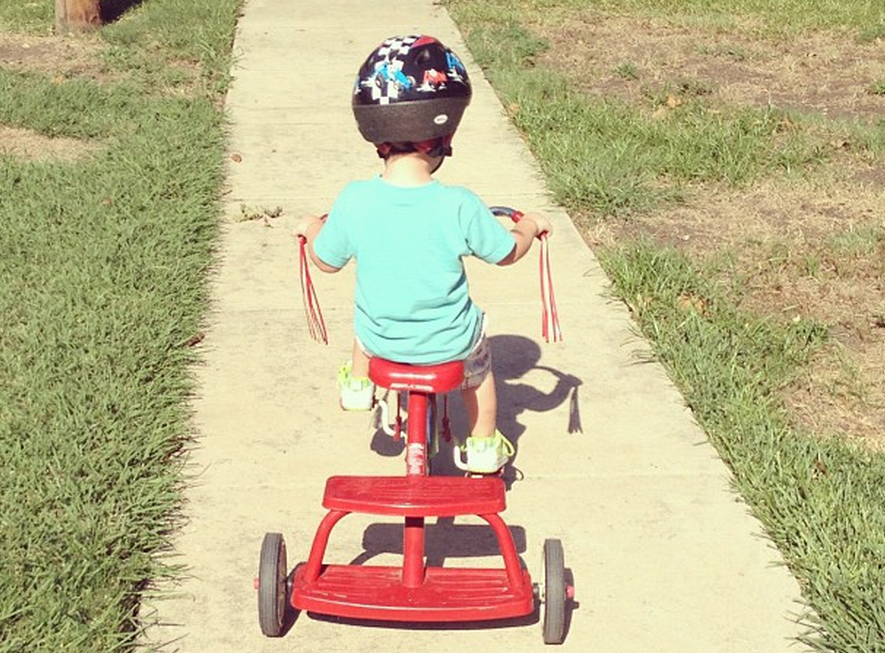 There is a thing I’ve been wanting to write about for quite a while now.

I never really knew how to do it or the forum within which I could operate. I worried that this thing might make me seem not very self-aware or somehow a bit disingenuous or (gasp!) a bit too proud of myself.[1. This is the very last thing I want you to glean from reading this.]

This thing is important to me though and I finally just said “screw it, this is my blog, I can write whatever I want.” You all have walked through so many parts of my life with me – my new job, a new house, new car, new pregnancy (!) – I thought “why not one more?”

Plus, I usually empty the tank the day before the season starts — I did it last year and I did it the year before that. This year though, it’s a little different.

When I was a child (like, a young child) I would saunter out of the house, my Thurman Thomas jersey in tow, with my pops – front bumper pointed in the direction of Stillwater.

We would go to baseball games, basketball games, football games, all of it. We would eat popcorn and I would memorize the media guide and we would root on the Pokes.

I would inevitably fall asleep on the way home as he drove and listened to the postgame show and probably smiled at the idea that his child was growing up to be just like him – a lover of OSU, a lover of life.

Every notion I have of those days, whether subconscious or heavily aided by photographs, is a fond one. I loved that time – there was no mortgage to pay or tires to rotate or, well, children to wrangle into bed every night (other than me).

It was just good.

It was good for my pops, too, I know – but it was good in a different way.

It was good for him in a way that I wasn’t acutely aware of until this year.

In February my wife Jennifer and I took a 23-month old boy into our home as a foster child. His time with us was to be mostly an ambiguity but probably not to be less than six months or exceed 18 months.

He came latched to the shoulder of a CPS worker who dropped trash bags of his things into our spare bedroom and left wife and I with a raspy “good luck” and a smile.

After she left we wheeled around, mortified that this child was scaling the highback chair in our living room as if it was Mt. McKinley.

We had no idea what we were doing.

We just knew that we had a boy whose parents, shall we say, would have gotten along well with people running in the same circles as Lamar Odom or John Daly or maybe Ryan Leaf.

I’ll never forget the first night he sat on his bed, his hair wet and tussled from having just been bathed, staring at us as if we both looked like  Rajon Rondo.

He was terrified and, truth be told, so were we.

It was a foreign thing to me to interact with another human whose parents were incapable of caring for him, even if only for a short time. I had pretty much exclusively engaged with friends (and humans) who had always had at least one parent they could rely on (I think this speaks to my lack of cultural diversity more than anything else).

This was a whole new world.

Over the weeks and months that followed we started to climb into a rhythm that both satisfied us and constructed some sort of security and framework for development for him.

It has been the great joy of my adult life to do this with him and with my wife.

His presence has been one of the wonderful things about working at home.

When I finish the Bullets every morning and he walks into my office at 7 AM and says “good morning” and climbs into my lap and raps on my keyboard and says “daddy, I’m working like you” I just want to die of joy.

It is the greatest part of my job.

I’ve always had this idea that fostering kids is a very strange, very bizarre thing that “normal” people didn’t do. I thought it was just people like the elderly woman in Angels in the Outfield (which, by the way, can’t watch that anymore without crumbling!) but I suppose it can be whatever (and whoever) you want it to be.

I’ve learned more about my marriage, myself, my life, and my passion for sports in seven months of fostering a two-year-old than in my first 303 months of living on earth.

And I see in him this desire that is not unique to children but is new to me – this desire to know the world and everything in it (somehow “everything” usually means knives and hammers and sewing needles that are left sitting around the house).

I’ve taught him to flex his muscles and kiss them (I am very proud of this, my wife is not) and I taught him who Tiger and Phil are (great role models, I know).

This fall I will teach him who Clint Chelf is and who JW Walsh is and how to say “choo-choo” and that the pistols family (so by proxy, he) is #TeamChelf.

My wife taught him how to put his fingers in the air and shout “Go Pokes” and it still looks like he’s trying to poke holes in the clouds when he does it but that’s OK because all he really needs to know is the “Go Pokes” part.

I’ve taught him how to swing a bat and how to catch a ball and he’s terribly bad at both things which is fine because really, who cares?

This fall I’ll teach him that all the cool kids tuck their pullovers into their slacks and that we don’t buy him red clothes for a reason.

I’ve taught him how to shake hands and how to wear your hat backwards and that reading is to be valued over all other life skills.

He’s taught me everything else.

Sometimes when he isn’t around I think about the ambiguous life we will at some point send him back into – the life where we don’t get to hug him and take him out for ice cream and let him “be in charge” of the tape measure at Lowe’s.

I think about this life and weep a little bit to myself because I think every kid should get to ride home with his pops from OSU games in Stillwater and I know this kid likely will never get to.

I don’t know what he’ll get to do or where he’ll get to live or what books he’ll choose to read and it crushes me.

These are the moments when it hits me how silly these football and basketball games are and how little eternal meaning they provide.

I am beyond grateful for the profession I am allowed where I get to discuss these games and have fun with them and hopefully make you laugh and think and make you engage your friends because of something I wrote or said.

But I do not worship these games or these people because they cannot be my god.

Maybe this boy will grow up to pen a blog and make your kids laugh or maybe he’ll grow up and do something actually important for society. The hardest part – the part that keeps me up at night – is that I’ll likely never know.

My wife and I prepared for all of this, of course. We went to classes, we read, we built theories about how we were going to do it. We even (I know all parents will giggle at this) planned!

But when he sat there on that bed the first night in his “DJs” as he calls them, with his monster blue eyes staring at my wife and I – well, all those plans got tossed out the window.

It’s all eerily similar to what college football season is usually like. We plan and pontificate and project and usually by Week 5 everything has been lit on fire and all that remains are the wisps of smoke representing what used to be.

So I hope you revel in this season, guys (and girls) for college football is, if nothing else, the most joyous (and, ironically) childlike escape we can possibly immerse ourselves in.

It is a smattering of incredible moments and (hopefully) much laughter and (playful) argument and discussion.

But remember (always remember) that what matters is not the people you don’t know and root for every Saturday.

And appreciate that this game that we all love so much can be the vehicle by which we all commune together.

On life and with each other.