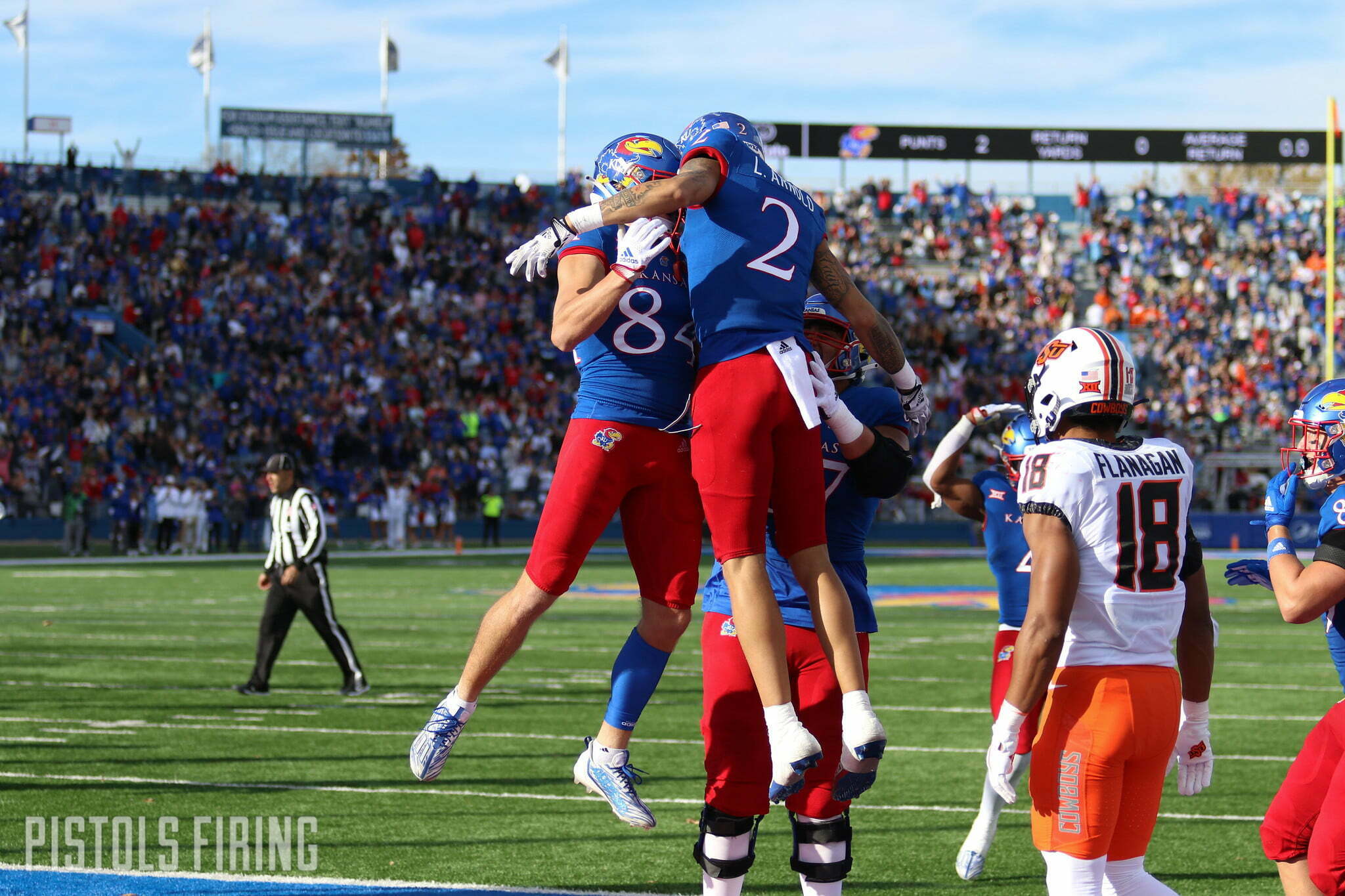 Seven days after Kansas State blew OSU out 48-0 in the largest loss of the Mike Gundy era, Kansas whipped the Pokes in similarly embarrassing fashion, 37-16. The Cowboys never led in the game, trailed by double figures by the end of the first quarter and cut it to single digits only briefly in the second quarter before the rout was on.

A trio of turnovers and an inability to stop the run made for an ugly first half for the Cowboys, and things never really recovered from there. After trailing 24-7 at halftime with three turnovers in the first frame, OSU struggled again stopping KU on the ground in the second half and also struggled generating offense behind Garret Rangel, the true freshman QB who was thrust into action with Spencer Sanders missing the game due to injury.

Our live blog recap of the game with thoughts from Marshall in Lawrence is below.

FOURTH QUARTER (5:00): Kansas marches down the field again but the OSU defense limits KU to a field goal attempt, which is good.

FOURTH QUARTER (9:21): Rangel leads the Cowboys right back down to field and caps a drive off with a 35-yard TD pass to Jaden Nixon. Rangel is 24-for-34 with 254 yards, two touchdowns and two interceptions. It’s 34-16 Kansas after a failed 2-point attempt.

Kansas ran for 239 yards in the first half, averaging 11.4 yards a carry. Meanwhile, OSU had a trio of turnovers.

SECOND QUARTER (9:59): This is not a drill — Oklahoma State scored points in a football game. Rangel hits Stephon Johnson on a goal-line fade to cap off a 15-play, 75-yard drive. 10-7, Kansas.

FIRST QUARTER (10:07): Rangel is picked off again, make it two in two series.

FIRST QUARTER (11:21): Touchdown Kansas. Devin Neal runs in from 31 yards out. On the Jayhawks’ first series, Neal had two carries for 55 yards and a touchdown.

FIRST QUARTER: The Cowboys had some success moving the ball on Rangel’s first series as a starter, but on 3rd-and-5 from the KU 35-yard line, Rangel’s pass was intercepted.

RANGEL TO START: Gunnar Gundy has acted as the Cowboys’ backup quarterback all season, but it looks as if Garret Rangel is set to start for the Pokes against Kansas. After taking snaps with the first team in warmups, Robert Allen reports Rangel will make his first career start. Having only played in one game before Saturday, Rangel is 0-for-2 with zero passing yards this season.

INJURY UPDATES: The Cowboys’ injury list is a long one, and it starts at the most important position in football: quarterback. Spencer Sanders isn’t expected to play, but the Cowboys’ starter is still TBD. Dave Hunziker reports that Gunnar Gundy and Garret Rangel split first-team reps 50/50 this week.