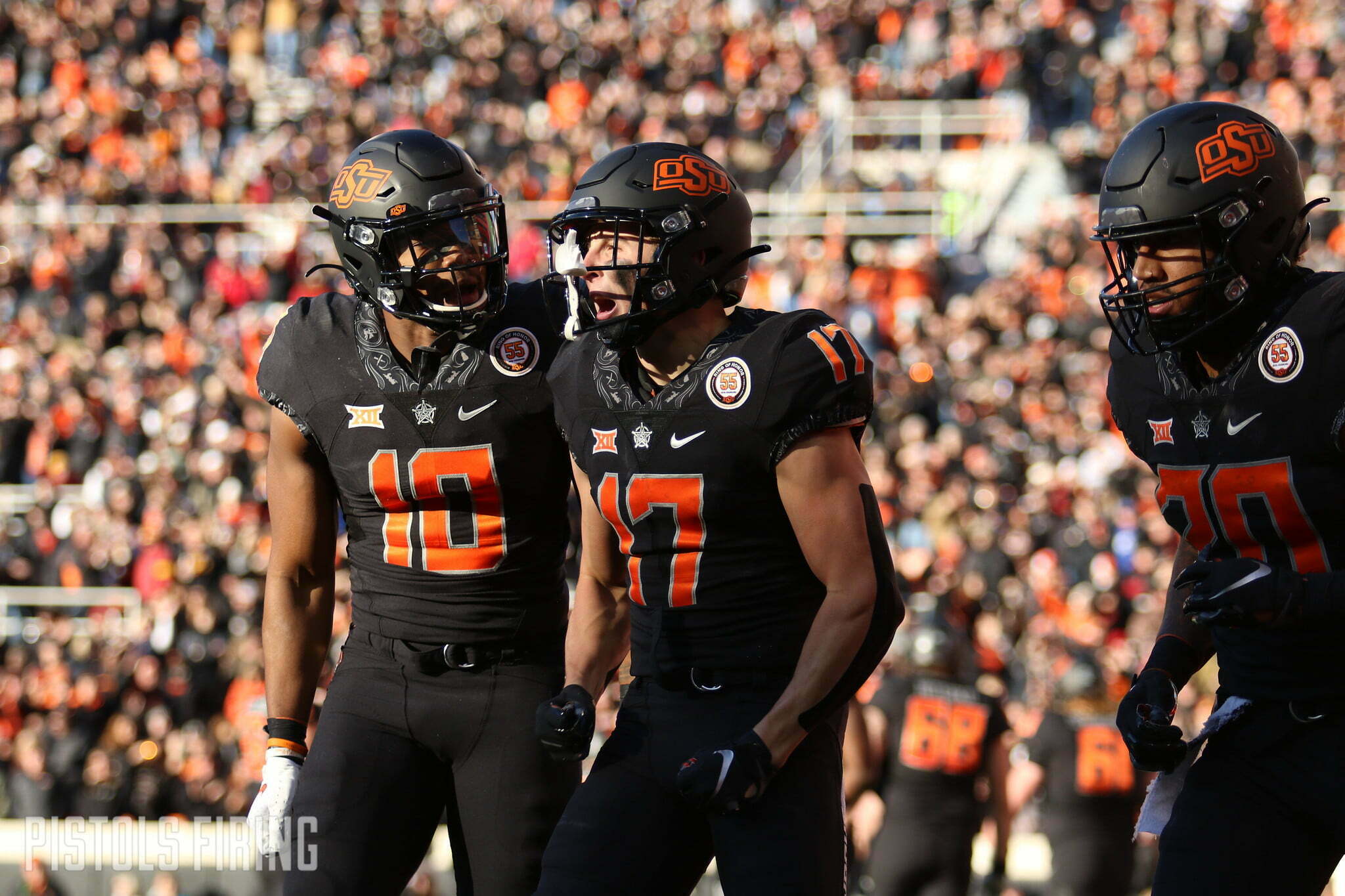 In what can really only be described as a really, really weird football game, Oklahoma State on Saturday — somehow, someway — found a way to get back into the win column. Despite starting its No. 3 QB on the depth chart and missing three defensive starters, the Cowboys rallied from a fourth quarter to deficit to score 10 unanswered points over the game’s final 10 minutes to win 20-14.

With Spencer Sanders available but not starting and Garret Rangel ailing, OSU began the game with freshman Gunnar Gundy at quarterback, his first career start. Gundy wasn’t asked to do much, completing five of his 12 attempts for 103 yards and two picks to one TD. But when OSU tried to open it up in the second half, Gundy threw an inexplicable pass to an Iowa State defender.

That prompted OSU in a major surprise to turn back to Sanders, who missed last game with a shoulder injury and is believed to have missed practice because of injury for most of the last two weeks. And boy did that pay off. Sanders completed nine of his 13 pass attempts for 84 yards and a score and in his second possession, helped march OSU for a much-needed TD to take the lead.

“He’s got 50 games of experience,” said Gundy on ESPN after the game explaining Sanders’ moxie and why they didn’t start him but decided to finish with him. “When you bring a guy off the bench like that — we want to protect him — but he brings you charisma. We were able to throw the ball around and find a way to get things done.”

Here is a recap of our live blog coverage from the game which includes highlights and analysis.

FINAL PLAYS: Collin Oliver chases down the Iowa State quarterback from behind and on fourth and 10, his sack ices the win. HUGE effort by Oliver and the defense down the stretch. OSU kneels it out and wins.

FOURTH QUARTER, :25: It’s fourth and 10 for Iowa State in striking territory and 25 seconds left. A stop here wins it for OSU.

FOURTH QUARTER, 2:46: The OSU defense holds. Iowa State briefly contemplated going for it on fourth and very long, but ultimately is deciding to punt and bet on its defense to get the ball back. OSU takes over at the 36 yard line. Needs to go about ~40 yards to get a field goal and maybe put this one away.

FOURTH QUARTER, 4:13: WELL THIS COULD HAVE BEEN BAD.

FOURTH QUARTER, 4:19: OSU converts its fourth down stop on Iowa State into three points to take a 20-14 lead with 4:19 left. Iowa State has all three timeouts left. Lot of game still to be played.

FOURTH QUARTER: I definitely don’t understand holding Spencer Sanders out most of the game then putting him in in the fourth quarter to close it out — if he was being held out for injury reasons then it seems like a bad look to suddenly loosen those precautions just because OSU is in danger of losing — but it’s clear why OSU would make the call. Night and day difference between Gunnar and a 60% Sanders.

FOURTH QUARTER, 9:18: Spencer Sanders has entered the game and completely changed things. OSU is back on top 17-10 after this TD throw.

FOURTH QUARTER: OSU trails 14-10 and has now trotted out Spencer Sanders — who hasn’t practiced since before Halloween — to finish out this game. Sanders has been dealing with a shoulder injury and did not start the game. Totally bizarre decision. If he is healthy enough to finish the game, why wouldn’t he have started the game?

THIRD QUARTER: Ugly pick from Gunnar Gundy, followed by an equally ugly pick from Iowa State as Jason Taylor gathers it. Now Spencer Sanders is into the game at quarterback after he was deemed unlikely to play with a shoulder injury. So many things happening. OSU needs a spark trailing 14-10.

HALFTIME: OSU leads Iowa State, 10-7, thanks to an 83-yard touchdown pass from Gunnar Gundy to John Paul Richardson in the second quarter. Lot of good defense being played. Not very much good offense. Going to be a grind in the second half.

SECOND QUARTER, 0:36: Iowa State misses an attempted field goal from 41 yards that would have tied it just before half. OSU leads 10-7 with 36 seconds left to go. Perfect kneel-and-get-outta-here territory for Gundy.

SECOND QUARTER, 2:40: After throwing a laser on the previous possession, Gunnar Gundy this time drops a duck down the field that lands in the hands of an Iowa State defender. Interception.

SECOND QUARTER, 6:31: Heck of answer by OSU. Gunnar Gundy goes deep and connects with John Paul Richardson for a catch and run that goes 83 yards to the crib, marking the longest offensive play of the season for OSU. It’s 10-7, Pokes back on top.

SECOND QUARTER, 7:20: Iowa State converts its blocked punt into easy money. Cyclones score from seven yards out to go up 7-3.

SECOND QUARTER, 8:20: OSU falls to 0-for-6 on third-down attempts for the game as Gunnar Gundy’s attempt across the middle to Brennan Presley is dropped. (Ball was a tad high, but probably should’ve been caught.)

SECOND QUARTER, 12:10: OSU gets on the board first with a field from 37 yards at the boot of Tanner Brown. Free points after the OSU defense forced a turnover — its third of the game.

FIRST QUARTER, 6:40: After Gunnar Gundy’s helmet gets knocked off, SPENCER SANDERS goes in to take the snap at QB for Oklahoma State. That’s unexpected. He hands off on third down, OSU gets stuffed and the Cowboys will punt. Doubt we see Sanders again, but that was bizarre.

FIRST QUARTER, 15:00: With Spencer Sanders out and Garret Rangel doubtful, Gunnar Gundy makes his first career start for the Cowboys today. First pass attempt is a swing pass to Dominic Richardson for a first down. Gundy the son of OSU coach Mike Gundy (duh) who had a really productive career at Stillwater High School. Lightly recruited but a film junkie who takes the opportunity seriously. Excited to see what he can do.

PREGAME INJURY NEWS: Spencer Sanders is out and Garret Rangel is doubtful, setting up freshman Gunnar Gundy to start for OSU at quarterback, per Dave Hunziker. Offensive lineman Preston Wilson also out. On defense, defensive ends Trace Ford and Tyler Lacy won’t be available, and defensive back Thomas Harper is also out.