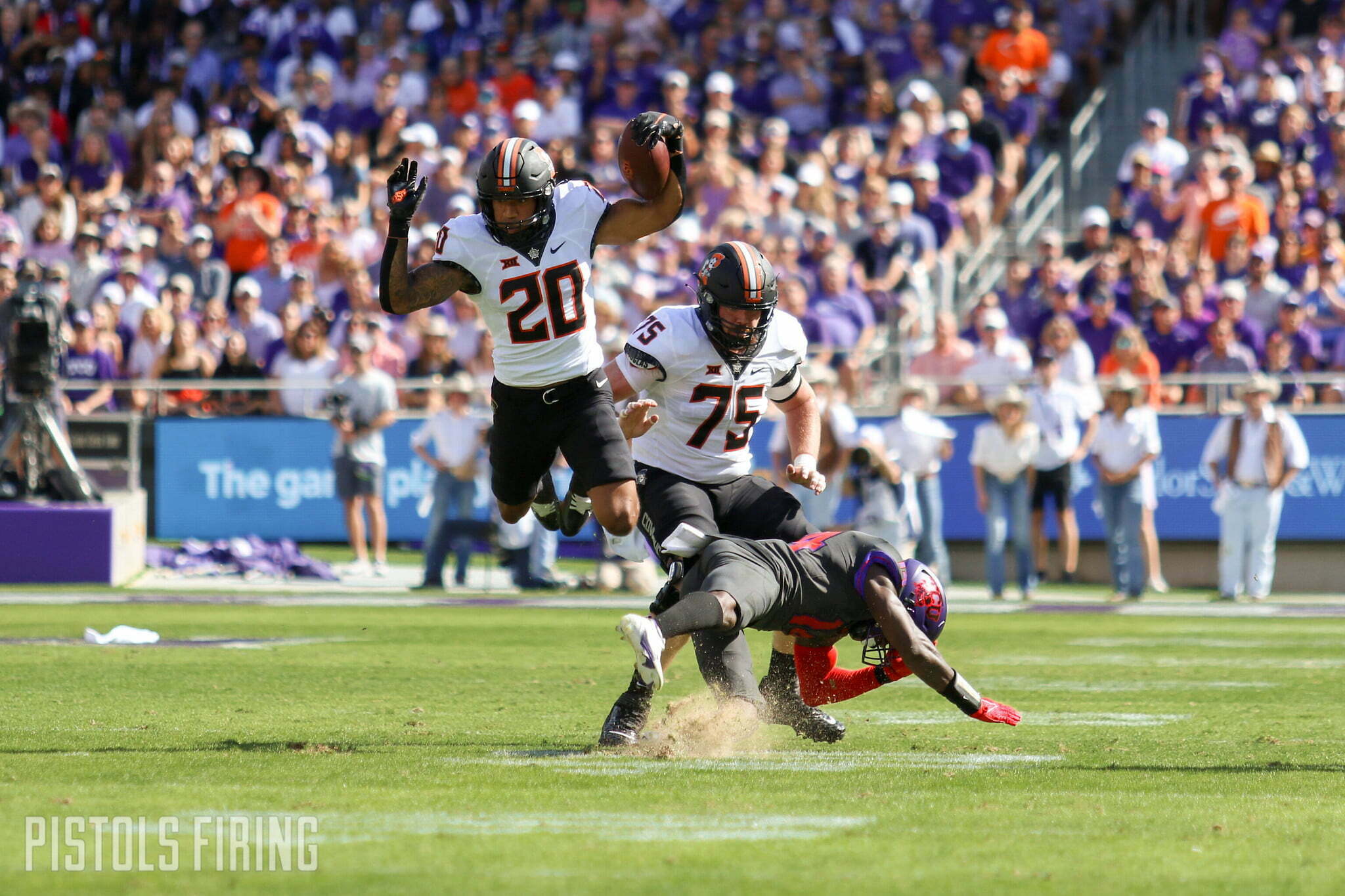 Oklahoma State led by 17 points on the road in Fort Worth, but the Cowboys offense crumbled late as TCU rallied in the second half and to force overtime (and eventually a double overtime) before winning 43-40.

Here are the live updates from the game in reverse chronological order.

END OF GAME: TCU converts the goal-to-go situation with a two-yard run from Kendre Miller. Final score is TCU 43, OSU 40.

DOUBLE OVERTIME: Max Duggan marches down to the 1 yard line. TCU with first and goal at the 1. Feels over.

DOUBLE OVERTIME: TANNER BROWN! A SEASON-HIGH 52-YARD FIELD GOAL FALLS RIGHT THROUGH THE UPRIGHTS WITH ROOM TO SPARE. OSU takes a 40-37 lead. But TCU has a chance to win it here now. A TD will end the game.

DOUBLE OVERTIME: Braydon Johnson has the ball in his hands on first and 20 right at the sticks on a rope from Spencer Sanders, but just drops it. After a holding penalty on first down, OSU playing from behind here.

END FIRST OVERTIME: OSU responds! A nice pitch and catch from Spencer Sanders to Braydon Johnson sets OSU up on the goal line, and Dominic Richardson punches it in. OSU opts to go for the PAT kick to tie it, and does so successfully, so it’s 37-37 after the first overtime. To another overtime we go!

OVERTIME: It’s fourth and nine for OSU’s offense. Needs to convert or it will be ball game.

OVERTIME: TCU scores. Max Duggan connects with Quentin Johnston on a 25-yard catch and throw. He was wide open. They were playing zone there on the back end and Johnston somehow snuck past everyone into the open space.

OVERTIME: TCU gets possession first at the 25-yard line. OSU will get possession next.

END OF REGULATION: It’s 30-30. So we’re going to overtime. TCU quarterback Max Duggan getting checked in the injury tent here, so something to monitor. Seemed to be favoring his right shoulder on his throwing arm.

4TH QUARTER | 0:16: JASON TAYLOR WITH A HUGE PASS DEFLECTION! TCU had a man wide open downfield that would’ve converted a first down and given TCU a really good look at a field goal. TCU now punts instead, and OSU takes over at about the 25. Expecting OSU to probably kneel and take this to overtime.

4TH QUARTER | 1:07: OSU fails to convert on third down and will punt with 1:07 remaining. It’s a tie game. TCU can march down and take the lead (and maybe the win) here. Would be a stunning collapse for OSU, which led by as many as 14 points.

4TH QUARTER | 4:00: Quentin Johnston with a massive catch to put TCU just across midfield. He has seven receptions today and has already eclipsed 150 yards receiving.

4TH QUARTER | 5:20: Spencer Sanders on 3rd and 10 NEARLY escapes the pocket to convert a first down, but TCU wraps him up with a gang of defenders. OSU punts and pins TCU inside the five.

4TH QUARTER | 6:21: TCU with a chance to potentially tie or go ahead, but NOPE. OSU defense forces a quick three-and-out within a minute. It regains possession around midfield. It’s going to be a field position game from here out, knowing Gundy. If they can get 3 points, they’ll take them.

4TH QUARTER | 7:19: Oh man. Oh man oh man. Really costly interception for Spencer Sanders kills what was otherwise shaping up to be a big drive. TCU doesn’t get the ball in great position, it picked the ball off at the 5-yard line, but that’s one that could really hurt. OSU was really close to field goal position there, which would have made it a two-possession game.

4TH QUARTER | 9:24: An unbelievable update here. OSU was called for offsides on that last defensive possession after subbing out (following a TCU sub), which is completely within the rules.

When TCU subs on offense, it allows the defense to make its own sub. It’s not an offsides penalty, wasn’t an offsides penalty in the first half, but the officials seem to have changed the application of the rule WITHIN THE GAME. OSU is going to have some MAJOR gripes postgame about that. Completely ridiculous.

4TH QUARTER | 11:50: OSU forced to punt on its first offensive possession of the second half, and to make matters worse, TCU gets a nice return to the 47 yard line. Trailing by two touchdowns, TCU has a chance to make this one uncomfortable. OSU defense could really use a stop here.

3RD QUARTER | 1:30: Another impressive offensive drive again stalls out, but again it is Tanner Brown who boots it through the uprights to come away with points. OSU’s lead back up to two touchdowns, 30-16, after TCU got a field goal of its own earlier.

3RD QUARTER | 11:40: OSU’s first drive of the second half ends in points as Tanner Brown boots home a field goal. OSU opens up a two-touchdown lead, 27-13, with 11:40 to go in the third quarter. Big to get points there, but definitely a little disappointing after moving the ball down the field very easily. A touchdown there could’ve really broken things open.

It wasn’t all Oklahoma State in the first half, but it was pretty darn close. The Cowboys jumped out to the early lead and have lead wire to wire thus far as we head to halftime. Spencer Sanders hasn’t been dominant passing the ball, but hasn’t needed to be thanks to a really good rushing showing on the ground in the first half. Sanders leads OSU with 51 yards rushing and two scores and has a passing TD (to JPR) to boot. TCU with 100 yards rushing at the half including a pair of late field goals in the final few minutes to eat into the OSU lead. Only TCU TD came in the first quarter on a 1-yard rush from Max Duggan.

2ND QUARTER | 10:04: Oklahoma state builds its lead to 24-7. Sanders finds John Paul Richardson in the end zone. Richardson fought through an uncalled holding and still hauled in the ball.

2ND QUARTER | 13:32: A muffed punt for TCU gives OSU great field position. But the Pokes can’t capitalize, as their offense stalls in plus-territory. On 4th and 3 they opt to take the points, so Tanner Brown’s 35-yard field goal gives OSU a 17-7 advantage.

1ST QUARTER | 1:40: TCU gets on the board with a 1-yard TD run from QB Max Duggan to draw within seven. OSU’s defense gave up a 48-yard passing play down to the 1 to set up that score.

1ST QUARTER | 6:19: Dominic Richardson, an Oklahoma product who originally signed with TCU out of high school but landed at OSU after TCU took another running back in place of him, with a huge catch and run to pout OSU in scoring position.

1ST QUARTER | 10:25: Holy. Smokes. 29-yard touchdown rush for Spencer Sanders on OSU’s sixth offensive play of the day. Cowboys up 7-0 early. There was a ton of rumors about a possible Spencer Sanders game leading into the game, but looked very sharp on the first drive. Completed two of his three passes for 46 yards and had two rushes for 20 yards.