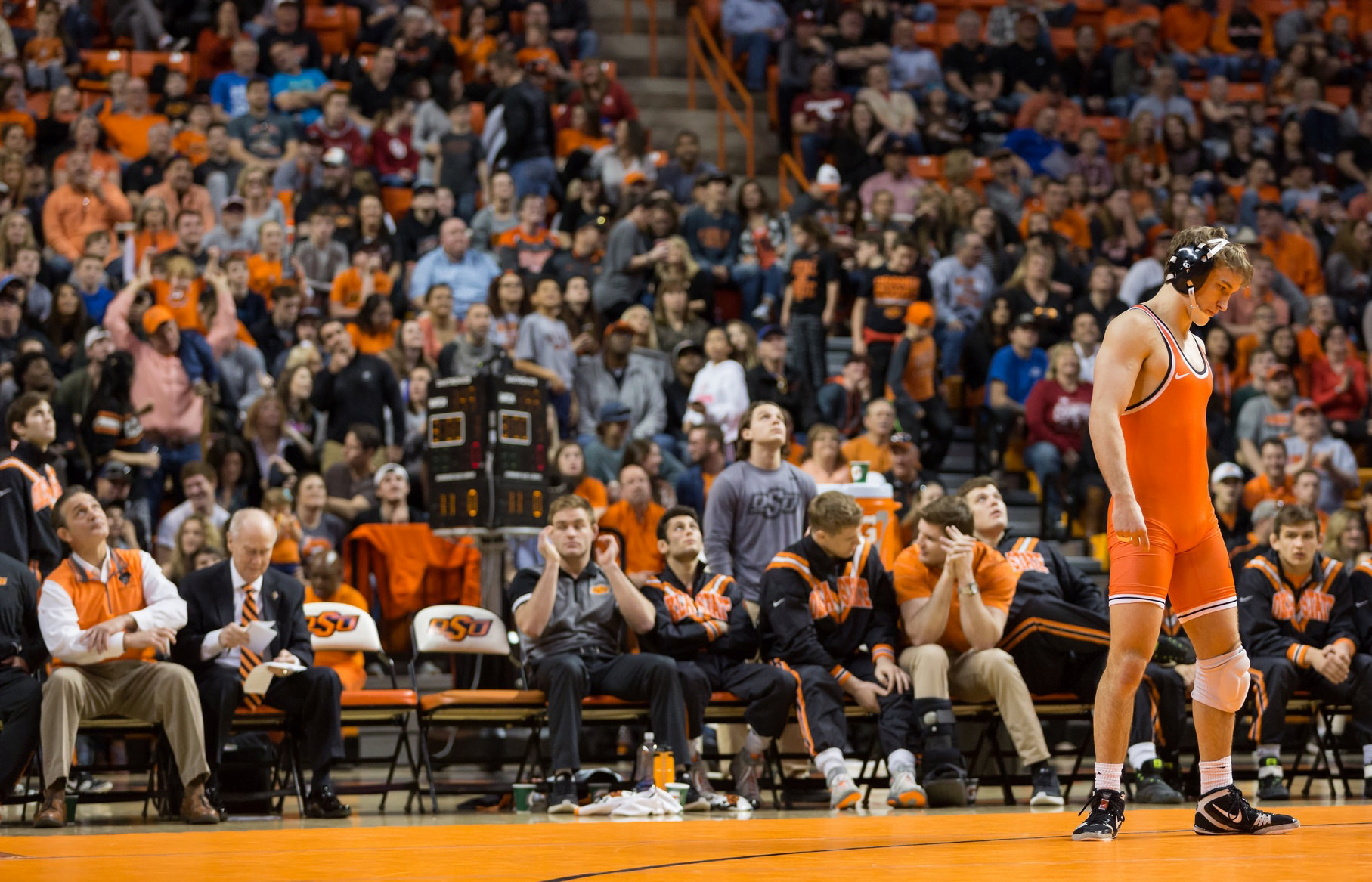 There are not many places in this plane of existence that are equally electric when they are at their polar opposites. Gallagher-Iba Arena is one of those places.

When you are alone in the old 4-H barn, you can feel the ghosts of the building in your chest. Hank Iba installing wrinkles in his motion offense. Ed Gallagher creating new ways for one man to contort the human opposing him into point scoring positions. Remnants of all of those historic figures hanging high in the rafters, Oklahoma State’s pride on display.

The same is also true when there are more people in the arena than there are seats. Fourteen thousand plus supporters clad in orange to cheer on their Cowboys. Fourteen thousand of your closest friends bound by one common goal, to will their team into victory. When the roar of the crowd hits decibels not meant to be endured by the human ear, those ghosts come back into your chest.

Eight days ago we were able to experience Gallagher-Iba at its absolute best. A record crowd came out to support the Wrestling Cowboys as they took on the Penn State Nittany Lions in the NWCA National Dual Championship.

There were moments of pure joy and support from the Cowboy faithful, and there were more moments of disappointment from the crowd. Although the Cowboys fell short against the Nittany Lions, this writer was incredibly proud to see that many people show up to support the wrestling program.

In spite of the program featuring more championships in NCAA Wrestling than any program in any level of sport, crowd support had always been capped at around 8,000. This particular Sunday afternoon in mid-February proved that OSU fans can and will show up, and in spite of the popularity of the sport not being anywhere near it’s peak, OSU fans showed a surprising familiarity with the rules and situations of the sport.

“It was exciting,” head coach John Smith said. “I’ve been waiting for that opportunity to pack the house for the first time since 2001. I’ve been excited about the opportunity to do that again and I wish we could’ve delivered a little bit more for the fans, but I wouldn’t give up on this team.”

“The one thing about this team is that they didn’t recognize that they went up against guys that have some world events under their belt. You’re not wrestling that guy — you’re wrestling a college guy. They’re tough kids and in the end we just didn’t have it …We just didn’t have the emotions to go out and do something special with it. I hope we can grow from it and be a lot more competitive as we prepare for the postseason.”

The Cowboys picked up victories in the first three matches, the first being a surprise win for Nick Piccininni when No. 2 Nick Suriano was forced to concede due to an ankle injury.

Those near the mat claim that Suriano told his coach “I broke my ankle,” and if that is the case then it will have serious implications on the NCAA race as Suriano is likely to make a long run in the title. Up to the point of injury, Picc was absolutely holding his own against the talented Penn State freshman, matching a quick takedown with a takedown of his own in the first.

A rematch between these two in the future is inevitable. Kaid Brock then took on Penn State’s weakest wrestler at 133 and gave up what was a sure technical fall in the third period to secure the major decision.

Dean Heil wrestled Penn State’s senior Jimmy Gulibon at 141, and did not win without controversy. In two instances, it looked like Heil was put on his back which would have given Gulibon his first ever win over Heil. Fortunately the ref did not call the pin, and the Cowboys took a 13-0 lead into the potential match of the dual at 149.

Heil said after the match, “I just did everything I could to hold on. There’s not much I could’ve done in that situation. I was in a position where if I would’ve went one inch to right or left, he would’ve been able to pop his shoulder or get two so I just had to hold on and make sure he couldn’t move. I was hoping for the stalemate, but time ran out and I was able to hold on until then and that was that.”

No. 2 Anthony Collica has been wrestling better this season than he had previously in his career with the Pokes. The senior from Ohio had an opportunity to cap his career in GIA with a win over top-ranked Zain Retherford, the Penn State junior that is a favorite to win the Hodge Trophy and become a future Olympic champion. The match did not disappoint.

Collica was not able to get a takedown on Retherford, but was able to keep Retherford from taking him down. In the third period, Collica was unable to escape from beneath Retherford after a couple of stalling calls gave Collica the penalty point. The match had some controversy, as Retherford appeared to continue to stall to keep Collica on bottom, however, the ref also missed a pin on Dean Heil … so at least the teams were even in the bad call department. Retherford picked up the 2-1 decision over Collica, and left the wrestling world hoping for a rematch in the NCAA finals.

“Collica had a good match and it was right after we had rolled into the 13-0. It looked like he had an opportunity there, but in the end the riding time was the difference. I thought that in that match there were some things that occurred,” said Coach Smith.

“I need to make sure I understand the rules as we head into the next events in the postseason. I thought maybe there were some scenarios, and maybe I need to understand the rules better, but each time the guy’s feet leave the mat — whether or not that’s a stall call every time or if it’s not. I’d like to just know that.”

The bleeding did not stop for the Cowboys after the match at 149. Joe Smith gave up a technical fall to No. 1 Jason Nolf. Chandler Rogers gave up a major decision to No. 4 Vincenzo Joseph. Kyle Crutchmer gave up the decision to No. 9 Mark Hall.

Nolan Boyd gave up a pin to No. 2 Bo Nickal. Preston Weigel gave up a decision to Matt McCutheon. With the dual firmly in hand for the Nittany Lions, Coach Smith decided to send Tanner Allen out at heavyweight to allow Austin Schafer to continue to rest his turf toe.

It was not a great showing by the Cowboys in the final 70 percent of the dual. Some of the matches can be forgiven. Jason Nolf is incredible and Joe Smith has been hurt all season.

Allowing a major decision or worse there for Joe was not a shock, as Nolf has picked up a pin or tech fall in 14 of his 19 matches this season. Bo Nickal picking up a pin over Nolan Boyd is also not a shock. Nickal is an incredible wrestler and Boyd, although one of the hardest working wrestlers in the country, was overmatched by the Penn State sophomore.  At 165, 174, and 197, however, you have to expect more from the Pokes.

The Cowboys will look to take as many positives out of this match as possible. All ten wrestlers should qualify for NCAAs, and there is still a shot for the Cowboys to bring home championship number 35.

“I don’t know if there’s any benefits to it, but I know we’re better than that,” said Smieth. “My team is made up of guys that have had a good year. We’ve had to wrestle and scrap. I think Penn State is a different team than what we’ve faced all year and in the end they showed they were a little different.

“Either we get better now, or there’s a bunch of us wrestling for second place. I’m not willing to let the title go and I do believe that we’re a lot better than we were today. Hopefully we can learn some lessons from today and get started again tomorrow.”

The Cowboys will be in action this coming weekend as they take on the rest of the Big 12 in Tulsa.