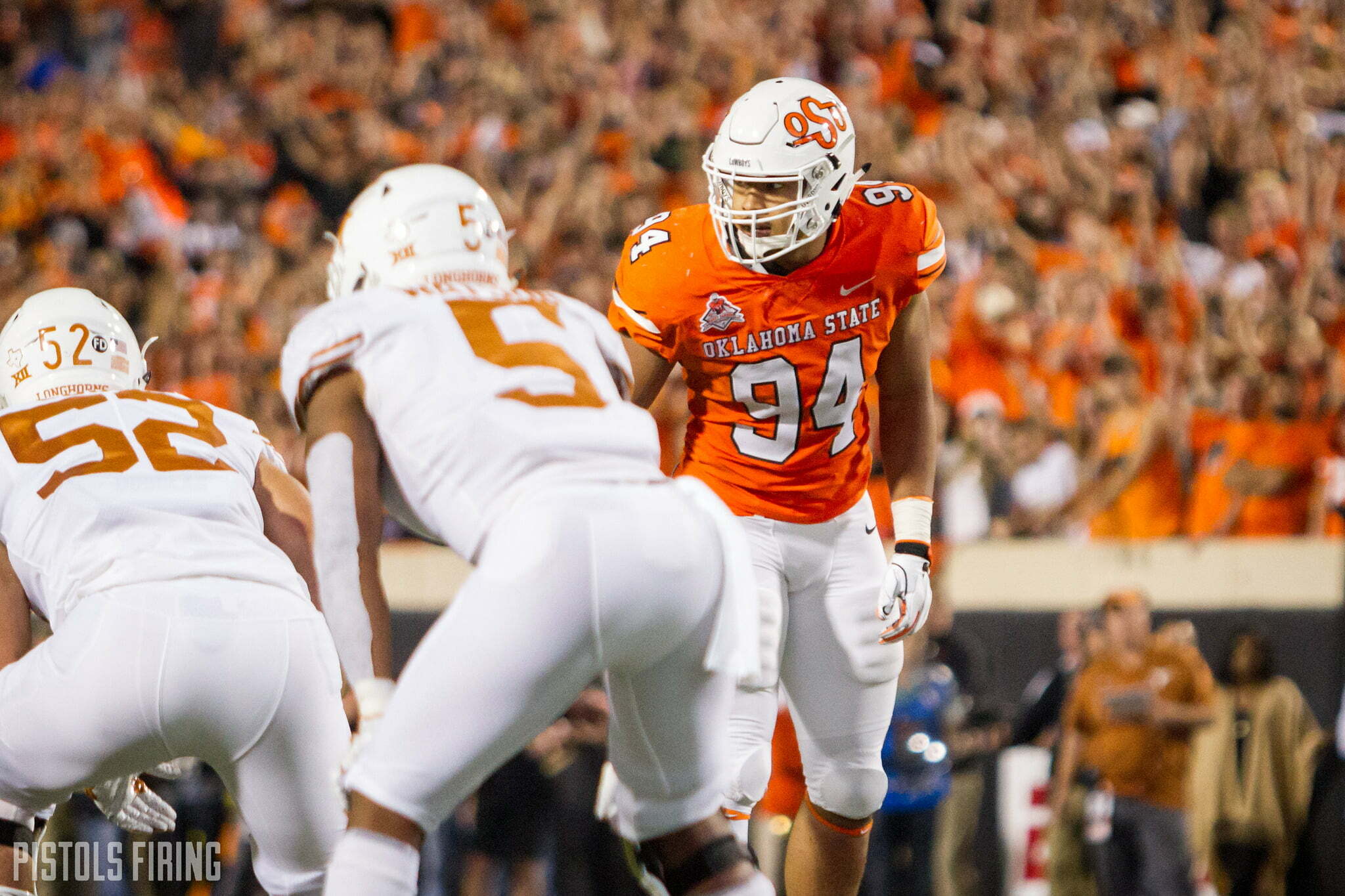 In Part 1 we looked at five Big 12 teams, highlighting the player that will be hardest for coaches to replace both on and off the field this offseason. Now let’s look at the next five, starting with Oklahoma State.

Disclaimer: this is who I think will be the toughest player for OSU to replace, not the best player leaving nor the one with the brightest NFL future — both would be Justice Hill in my book.

With what appears to be a star having taken the reins from Hill in Chuba Hubbard, I think the Cowboys will miss the pass rush and chaos caused by Jordan Brailford even more than what they lose in the wake of the record-setting RB.

Brailford led the Big 12 in sacks per game last season, despite not tackling a passer after Halloween. One reason Brailford’s production slipped later in the year is that opposing OCs accounted for him heavily. Do the Cowboys have that type of stud that teams have to plan for and double-team? I’m not so sure. Mike Scott — whose three sacks in 2018 lead all returning Pokes — could be that guy, but he’ll have to prove it on Saturdays.

Gary Patterson will look to rebound from a 7-6 season in 2019, but he’ll have to do it sans his two starting defensive ends in Ben Banogu and L.J. Collier. The former led the Horned Frogs in tackles for loss (18.0) and sacks (8.5), and according to Pro Football Focus, logged the fourth-most QB pressures in the nation (103) over the last two seasons.

TCU  returns just two DEs with any experience in junior Brandon Bowen (just 11 career games in three years) and redshirt frosh Ochaun Mathis (four career games). Neither has a career start. The Frogs do add South Carolina transfer Shameik Blackshear who will join the team after graduating this summer. But there is a lot of production to replace on the edge and not much experience left to replace it. TCU is going to miss Banogu in a big way.

If Texas truly is back, it will have to prove it can sustain heavy losses on the defensive side of the ball. The veteran-laden Longhorns boasted one of the better defenses in the Big 12 but have to replace eight starters this offseason, and none will be tougher to account for than DT Charles Omenihu.

A run-game nightmare, Omenihu had the second-most run stops among Big 12 edge defenders for a third-best run stop percentage of 7.8%. [Pro Football Focus]

Omenihu was second in the league in tackles for loss (18) and first in total sacks (9.5), edging out Brailford’s nine, albeit in one more game. He was a force in the Longhorns’ front who will not be easily replaced, but keep an eye on LB/DL Malcolm Roach to be leaned on heavily in his absence.

This was a tough one. I could have gone with polarizing linebacker Dakota Allen, but given the depth returning at linebacker and the role Wesley filled in Tech’s offense, I have to go with the rangy receiver.

The Red Raiders always seem to have athletic bodies to fill out their receiving corps, but Wesley was so important to Tech’s offense. His 117.5 receiving yards per game was second nationally and even with the high volume of looks (131 targets) he had an impressive 67.2-percent catch rate. And with Kliff having taken his swag to Glendale, who knows how big a step Tech’s offense might take back in 2019.

A case could certainly be made for linebacker David Long Jr., but I have to go with the most important position on the field — especially after I watched Jack Allison’s first start in the Camping World Bowl.

Grier was second in the nation in passing yards (351.3) per game and his 175.5 passer rating would look impressive most years. Unfortunately, he was just behind a pair of historic super heroes in Tua Tagovailoa and Kyler Murray.

Grier’s presence and arm finally turned West Virginia into a Big 12 contender and there is no obvious candidate to get them back to that point in Year 1 of the post-Dana era in Morgantown.