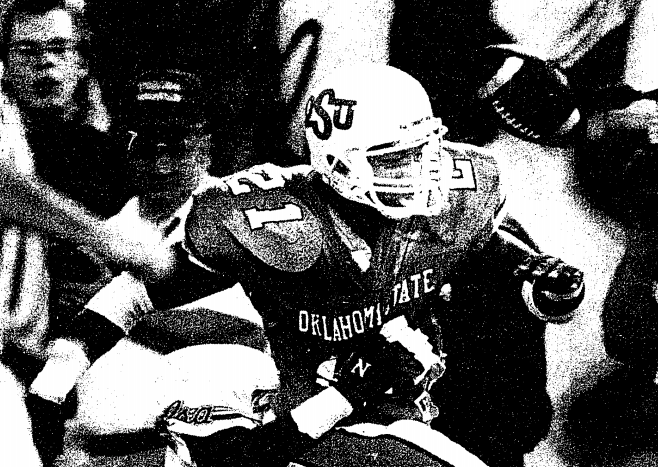 One thing I’ve been wanting to do is walk back through all of Barry Sanders’ games from the 1988 season and write about the individually. That’s what this series is about. Old articles, quotes, stats and tidbits you may have missed or didn’t know about.

Barry Sanders ran for 304 yards on 33 carries against Tulsa as OSU beat its in-state foe 56-35. OSU was up 27-0 at halftime but actually got outscored by Tulsa 35-29 in the second half. It didn’t matter. Sanders buried them early, and it was a hole that the Golden Hurricane couldn’t climb out of.

The 304 yards was a new school record, breaking Thurman Thomas’ old record of 293. It was a record Sanders would go on to break two more times that season.

“I gave a game ball to Sanders,” said OSU coach Pat Jones after the game. “I did not realize he had broken Thurman’s record. That’s astounding, but he’s an astounding athlete. Obviously he’s one of the all-time great performers in the history of Oklahoma State and Big Eight football.”

Here’s a fun stat on Sanders and Tulsa that year.

Tulsa averaged 147 rushing yards allowed to entire teams that didn’t have Barry. Sanders doubled that up, plus tax: 304. [Banner Society]

“He’s the closest thing to Bo Jackson that we’ll see,” said Tulsa coach Dave Rader after the game. “His acceleration is tremendous. He’s just an outstanding back who deserves all the accolades you and anyone else can give him.”

This is true. Through three games, Sanders amassed 639 yards on 71 rushes and had 11 total touchdowns. Tulsa — like Miami (Ohio) and Texas A&M before it — was completely helpless.

“If it had been a game of touch — this sounds bad — I think he still would have had that many yards,” said Pat Jones when he reminisced on the game in 2010. “They just couldn’t get their hands on him.”

Jones added this following the game in 1988, and I think it sums up the Barry era well. I think Jones understood early that he was dealing with something historical, and everything started to set in around this point in the year.

“Sometimes I think I’ve got to be a little bit careful about saying too many glowing things about him. Any coach is concerned that youngsters will let it go to his head, although I don’t think Barry’s that kind of individual. I don’t think I’ve ever been around one like him. I’m not sure there’s been very many like him.

“You know, Thurman and Terry Miller and Bob Fenimore were great, great backs. If Barry continues on … the only thing Barry needs to do is just see if he can withstand the test of time. But what Barry has done in the first three weeks of the season is abnormal.

“I quite honestly think if somebody would have told Barry, ‘You’re going to break Thurman Thomas’ record,’ he probably would have fallen down at 292 yards. He has that much admiration for Thurman. He’s exactly what you’d want any one of your youngsters to grow up to be.”

*Quotes and photo via the Oklahoman