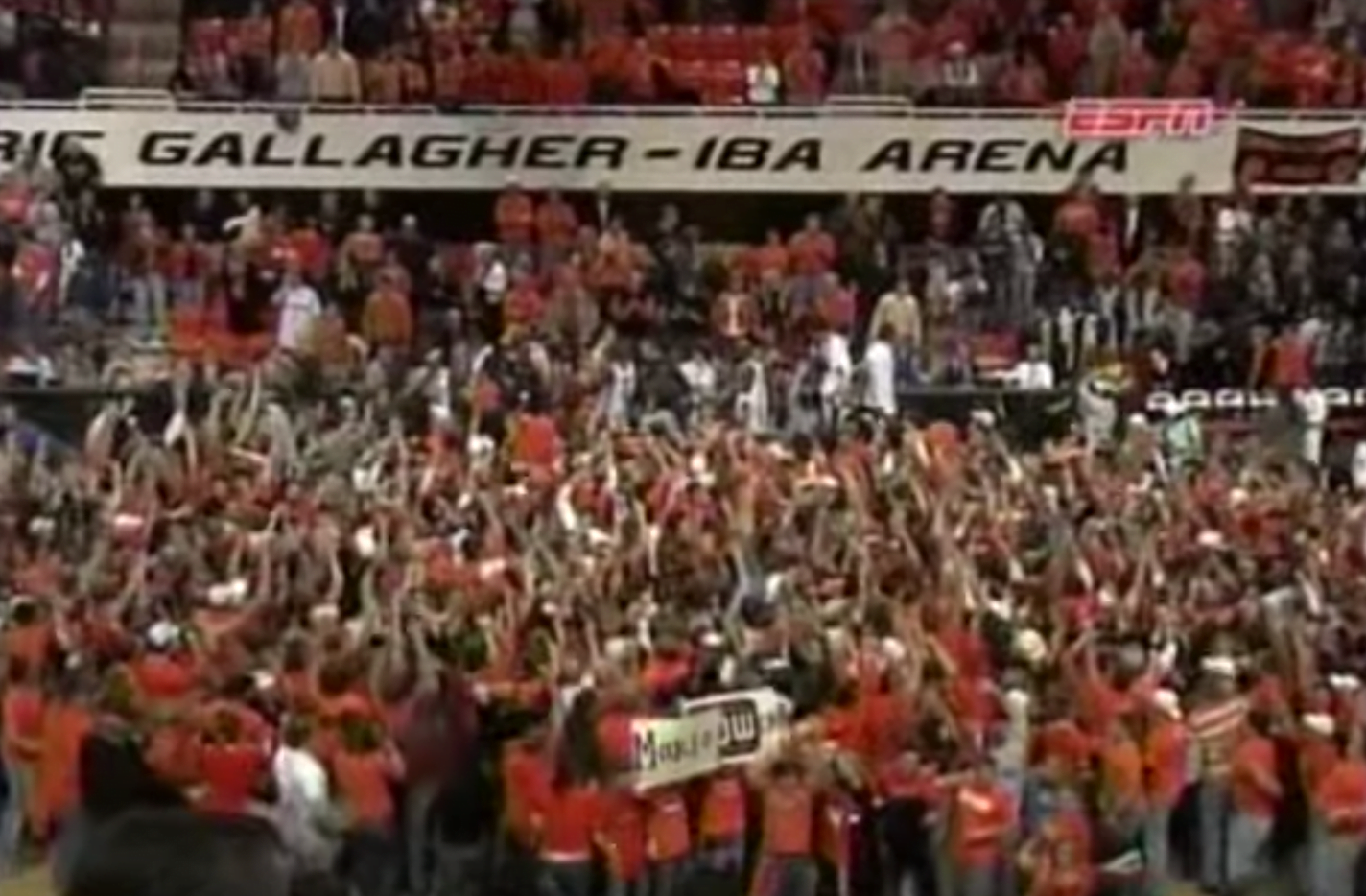 In our final edition of what has been an absurdly fun series to write, we look at the three overtimes that were played in GIA between OSU and Texas in 2007, Mario Boggan’s winner and Kevin Durant’s ridiculous closing kick. Hope you guys have enjoyed reading these as much as I’ve enjoyed writing them.

• Tyler Hatch in the backcourt helping JamesOn bring the ball up while adjusting his way too long shorts is an image I forgot I needed.

• Connor Atchley fouling Tyler Hatch on the block with Hatch barely getting off the ground and then missing both free throws is about as white as college basketball gets.

• JamesOn just abused Augustin on a fast break to go up 81-79. If Texas had won this game, it would have been burglary. At no point since the second half started have I thought, “Man you know what, Texas really deserves to win this game.”

• Side note: I’m glad OSU went away from both the orange-black fade in the lanes and the massive O-State logo at midcourt.

• OSU is throwing alley oops with 15 seconds left in OT against a top-25 team in case you were worried about their confidence level. Augustin went the other way in about 4 seconds to tie it up with 12 seconds left. OSU fails to score and we’re off to OT2.

• A.J. Abrams played the most minutes of anyone in this game, by the way. He went 55. Next closest was Boggan at 54.

• Boggan just made a reverse layup and got an and-one, and Hunziker lost it. What a night. Pokes up 88-84. Texas might not have led this thing for more than like 5 of 55 minutes.

• Tyler Hatch with a game-changing and-one in the second OT of a game with one of the best basketball players of all time. Normal.

• The two best shooters in OSU history. Don’t @ me. 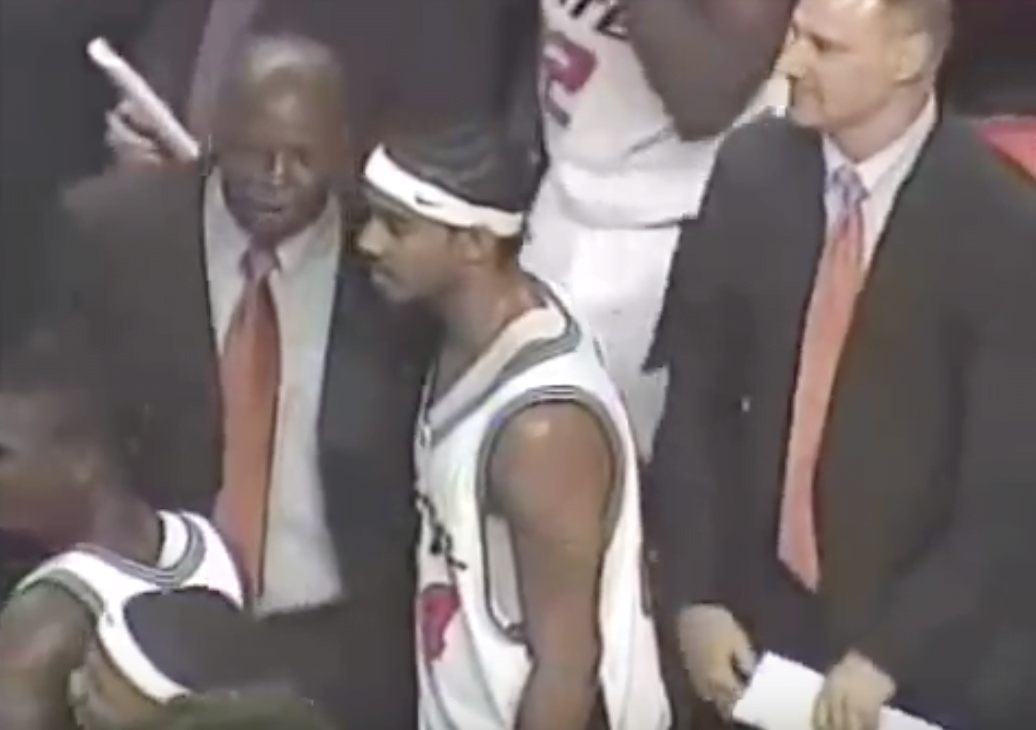 • That David Monds blocked-3-KD-drive-and-dunk to tie it was not the greatest 9-second stretch in Oklahoma State basketball history.

• Hunziker to open OT3: “This has really been something to watch.” Also to re-watch.

• Boggan just answered a Justin Mason 3-pointer with a fadeaway at the free throw line to make it 100-97. Then he grabbed his 20th rebound. Unreal.

• Atchley just hit a 3-pointer from the corner off an offensive rebound. Dirato: “You’ve got to be kidding me.” I’m howling!

• Abrams misses a 3-pointer, and Monds gets the board. The third Curry brother is at halfcourt running the clock down. Harris gets off a bad shot with 25 seconds left, and Texas brings it the other way before calling a timeout.

• Abrams misses a floater, but KD gets the board and gets fouled on a putback with 10 seconds left. Surreal in the moment, maybe even more so now. Dirato just called Sean “Eddie.”

• KD hits the free throw, and you know the rest.

• Side note: I don’t know how Boggan’s shot was a 3-pointer. It looked a lot like he had his foot on the line. Doesn’t matter, but I never really noticed that. 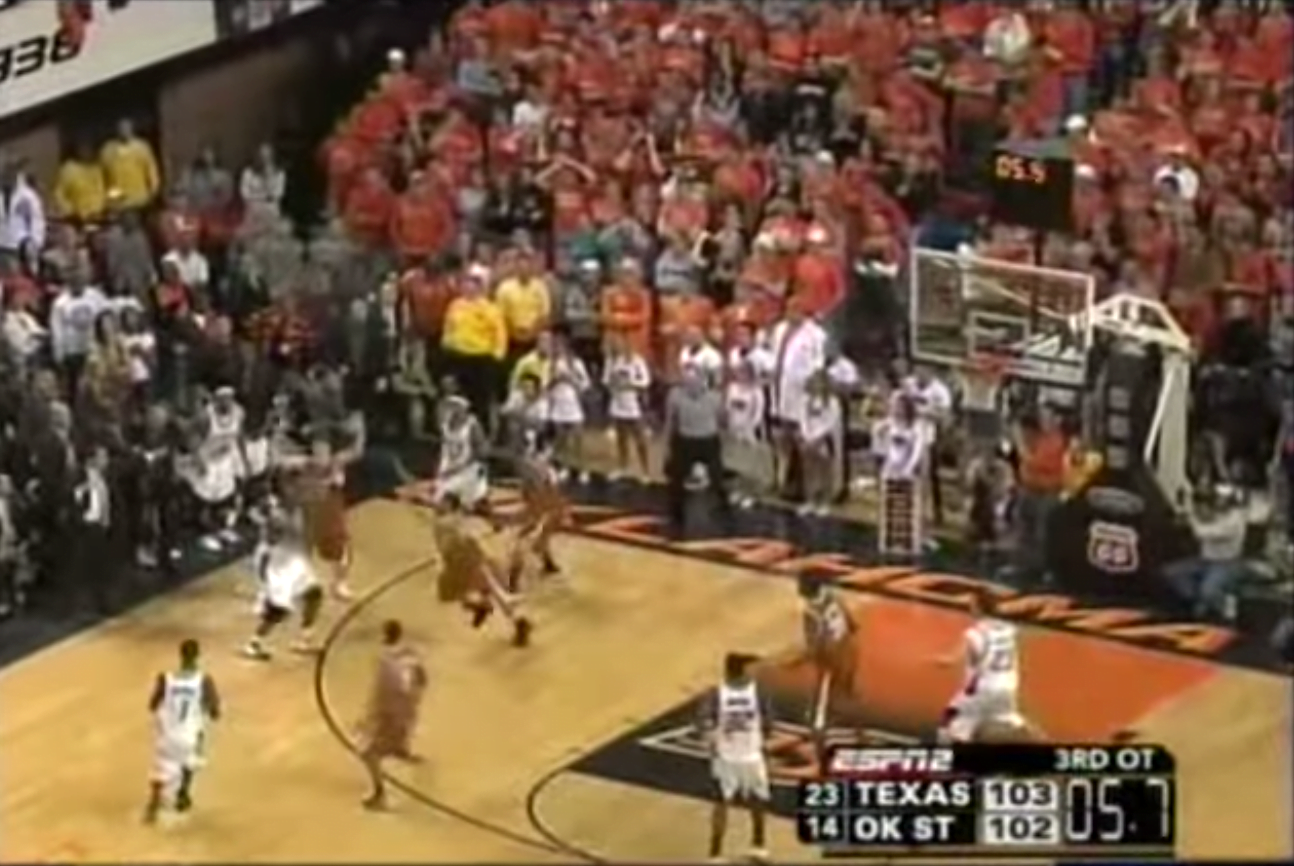 • Dirato at the horn: “In the 30 years I’ve been doing this, this goes pretty near the the top!”

Mario Boggan turned to Texas phenom Kevin Durant in the third overtime, smiled and told him, “Let’s go, Showtime.” The fantastic finish that followed will go down in Oklahoma State history.

• Sean Sutton was a quote machine after the game, too, calling Durant an “unreal talent” and leaving us with a great closing statement that I hope is true for a long time to come: “In this building, I always believe that we can do anything,” Sutton said.