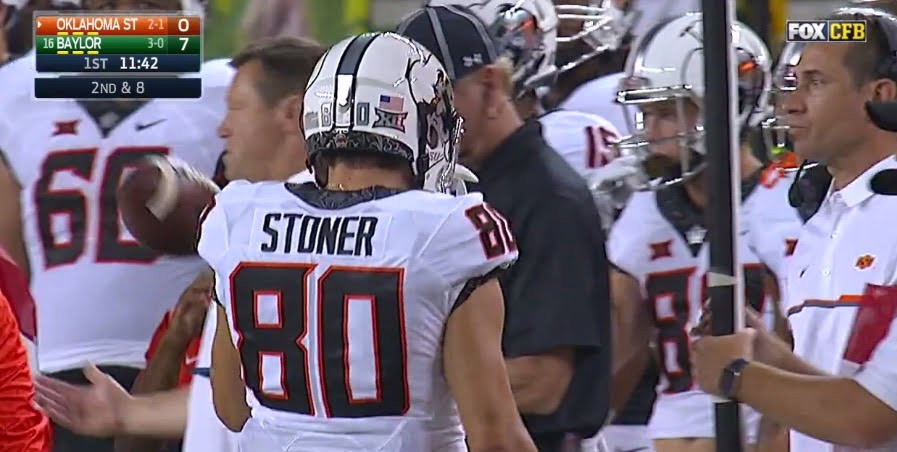 Highly touted freshman receiver Dillon Stoner, who has played in every game this season for the Cowboys, was injured in the conference opener against Baylor and will undergo surgery next week, according to a Facebook post from his mother. Stoner also posted about the news in a more vague way. As far as that potential medical redshirt, the information about medical redshirts is complex (which I know is shocking when it comes to the NCAA). Here are the criteria:

• The incapacitating injury or illness occurs in one of the four seasons of intercollegiate competition at any two-year or four-year collegiate institutions or occurs after the first day of classes in the student-athlete’s senior year in high school.

• The injury or illness occurs prior to the first competition of the second half of the playing season that concludes with the NCAA championship in that sport and results in incapacity to compete for the remainder of that playing season.

One instance of this happened at Ohio State a few years ago, and it came up that a conference championship game would count as part of the season but not a bowl game (this is bylaw 14.2.4.3.6.1.1.1 — a real bylaw!) So if you don’t count a potential bowl game for OSU, then Stoner has played in 33 percent of the season and would be ineligible for a medical redshirt.

A conference that denies an institution’s hardship waiver may submit the waiver to the Committee on Student-Athlete Reinstatement. The committee shall have the authority to review and determine whether to approve the waiver based on circumstances that may warrant relief from the application of the legislated waiver criteria.

You could make a couple of arguments here for Stoner getting a redshirt. One, Stoner got hurt in the game between 25 percent and 33 percent of OSU’s games. Two, the Big 12 does not have a conference championship game and would next year so that should be taken into consideration.

12.8.4.3.6.2 Fraction in Percent Computation. Any computation of the percent limitation that results in a fractional portion of a contest or date of competition shall be rounded to the next whole number (e.g., 30 percent of a 29-game basketball schedule — 8.7 games — shall be considered nine games). So 12*.3= 3.6 which rounds up to 4 games…

We have never really received a great reason for why J.W. Walsh didn’t get a sixth year after pretty clearly meeting all the requirements. Either way, this is a huge bummer for Stoner and for Gundy.

Stoner recorded five receptions for 27 yards through four games, and played a large role in special teams in the early going this season.

If Stoner does indeed take a medical redshirt as his mother stated, it will be a big blow to the receiving corps. who is already missing Marcell Ateman who is still recovering from an injury. With Stoner likely out, I would expect Austin Hays to take over those extra snaps at inside receiver in his absence, and Chris Lacy’s importance to the offense will likely increase as well.