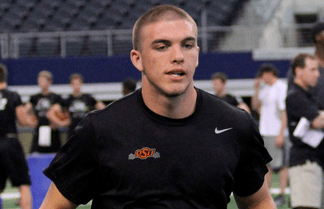 Back at it on the Wednesday Mailbag — as always thank you for reading and sharing PFB.

@pistolsguy how do you feel about the speculations that Rudolph may start this weekend?

Let’s talk about this on Thursday in more detail, cool?

@pistolsguy What (realistically) can Ford do in the next 2 yrs for you to give him another extension? Ignore past & baggage.

Well he’s signed through 2019 so he’s not going to get another extension (God help us) in the next two years barring two straight national titles and you said “realistically” so I think the real question is “what can Ford do to not get fired after the next two years?”

I’ve long said that OSU is a “finish 4th in the Big 12 and get-to-the-second-round” school but those expectations are lowered (dragged down?) by the weight of his contract. I think all Ford has to do is get to the NCAA Tournament in one of the next two seasons and he’ll continue to have a job.

That might be a bitter reality for some but it could also be worse, you know. (I can’t believe I’m saying this).

I’m not comparing the two (Eddie made it to the Final Four) but IF that’s your measuring stick then why fire him?

(I feel like I’ve given up on getting rid of Ford because it’s never going to happen. He will be the coach when my grandchildren are born).

You won’t be able to Google any on Sunday that I won’t have used.

By the way, I got a clandestine email from somebody today that guaranteed an OSU win if Rudolph starts.

On a scale of 1-to-the Mexican Assassin scoring six points in four seconds how improbable would Rudolph guiding an OSU victory in Waco be? And how irrational would we be about 2015?

@pistolsguy what are your thoughts on scheduling a "cupcake" non con at the end of the season? Like the SEC teams do.

If OSU plays a multi-directional school in 2011 in the second-to-last game instead of Iowa State we might be talking about that time Brandon Weeden took down LSU in the Superdome.

It shouldn’t have mattered, I get it, but scheduling one of your cupcakes late in the year when the pressure is ratcheted up is just smart.

You get a stress-free week where you can rest injured guys and get relief as you head down the stretch.

The downside is that the College Football Playoff committee apparently doesn’t appreciate scheduling cupcakes…but only if you’re in the Big 12.

I believe this is the case, yes.

1. It must happen during one of your four years of eligibility or during senior year of HS. Check.

2. It must happen in the first half of the season. Check.

3. You must not have played 30 percent of your team’s games or three games (whichever is greater). Check.

4. It must be season-ending and you must truly be incapacitated. (Someone will make sure this is a) Check.

@pistolsguy is Taylor Cornelius the next Brandon Weeden. Will we find out this Saturday?

What if Taylor Cornelius and Anthony Allen get drafted in the first round of their respective sports?

But really, what if Cornelius plays on Saturday and throws for like 525 and four TDs in a loss and we start calling him “the surgeon” or “the general” or (even better) “the magnate” or some other clever 18th-century moniker?

How much fun would that be/how much would we stare in disbelief at Gundy’s inability to pick the correct QB?

@pistolsguy reaching back as far as you want, what OSU coach or player would you want your kid to play pee wee football for?

Bob Simmons — I know my kid wouldn’t get injured on offense because he’d just give it to his kid on a draw play every time.

I’m of the belief that OSU is about four humans away from being pretty good in football next season. Granted, those four humans are three linemen (a few are coming, btw) and a QB but if Gundy can solve that Rubik’s Cube then we should be fine.

I’m more confident in Gundy’s ability to do that than I am in Travis Ford’s to piece together a team that goes deep into March.

Football, it’s not close. We might have to build a border around the state to keep 80 percent of the population from leaving out of unadulterated shame but hey, you have to make some sacrifices.

@pistolsguy You and 2 buds take a road trip to watch a non-OSU team play. Which team do you go see this year and why?

Jump around. Melvin Gordon might win the Heisman and if the Bald Man on Campus loves it then I’m pretty sure I’m going to love it.

@pistolsguy Bob Stitt: offensive coordinator. Who would be better?

I think the idea of Gundy bringing in somebody from outside a power five conference, much less a school called the Colorado School of the Mines, would not go over well.

You and I would love it (obviously) but I’m not sure the fanbase as a whole would.

@pistolsguy if you have to take any 2 OSU players to play with in NBA Jam against the original NBA Jam rosters, who would they be?

Are you trying to get me to tell the story about the time your college girlfriend beat me at NBA Jam at like 3 a.m. on one of those full-court shots that literally never goes in?

Or about how Brad Lohaus (Brad Lohaus!) was my mortal enemy for two straight years of my existence?

The key to NBA Jam — as anyone born between 1980 and 1990 knows — is having a world class rebounder/dunker with an elite shooter who can at least play a moderate amount of defense as his sidekick.

Based on that I think I’m going Byron Houston and Brooks Thompson. I want to pick Joe Adkins just because I think he might be able to set my entire television screen on fire but the right selection because of his ball-handling and defense is Brooks.

You could also talk me into Randy Rutherford without trying too hard.

@pistolsguy If Jay-Z signed Gundy… what would their mixtape be called? Does Jay-Z rap and Gundy just dance?