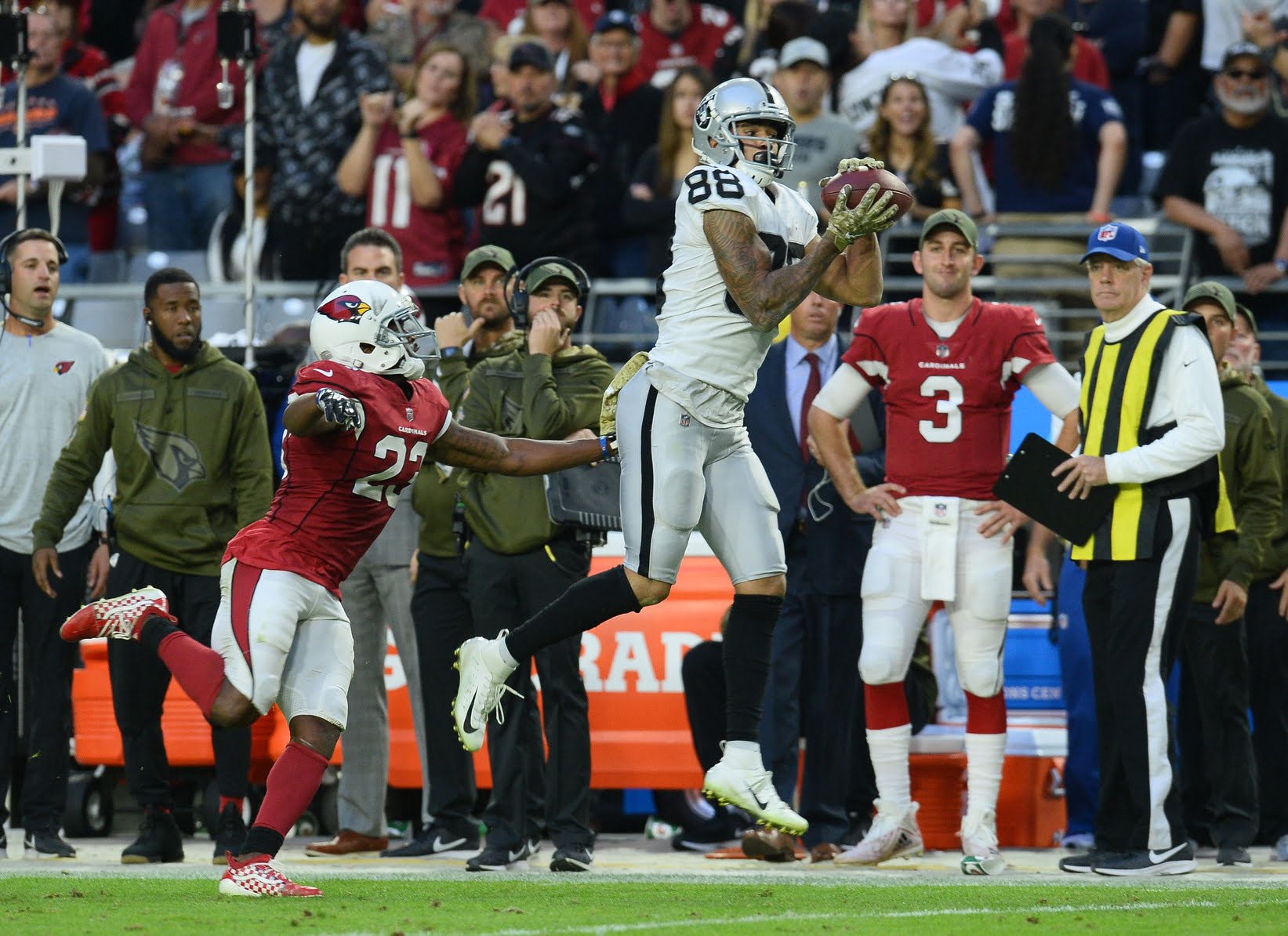 It’s been a long wait for Marcell Ateman, the Raiders’ seventh-round selection who fell so far down on draft weekend. But he came up huge in a much-needed win for his team on Sunday.

After being cut prior to the start of his rookie season, the former All-Big 12 wideout bided his time on Oakland’s practice squad until the trade of Amari Cooper to Dallas prompted his promotion to the active roster last month.

Coming into Week 11, with the Raiders’ depth chart (especially at wide receiver) decimated due to injury, Ateman started and finally saw his first regular season NFL action. And he paid it off.

Ateman caught four of his five targets for 50 yards, the most for a Raider in his debut since Louis Murphy had 87 in 2009.

Marcell Ateman's 50 yards receiving were most by a #Raiders player in NFL debut since Louis Murphy had 87 in 2009 opener vs Chargers. (Murphy could have had 19 more yards if not for a replay review) #louismurphyrule

The Raiders would pull out the 23-21 win thanks in large part to the former Oklahoma State receiver. Down 21-20 late in the fourth, Oakland QB Derek Carr looked almost exclusively to Ateman.

On that final game-winning drive, Carr targeted the rookie on three of six passing plays and had a 9-yard grab and this 32-yard connection that moved the Raiders into scoring position.

The Raiders would lean on another rookie Daniel Carlson to kick the winning field goal.

Ateman, who was projected by some as high as a first round selection after his 1,156-yard, 8-touchdown senior season, plummeted down draft boards after a subpar showing at the NFL Combine, including a disappointing 4.62 40-yard dash time.

But it appears that the stopwatch can’t cover, nor can it simulate real-time football.

Marcell Ateman's speed is something that had been questioned. It's a small sample size, but his average top speed today was 15.1 mph. That's faster than "deep threat" Martavis Bryant (14.7) or Amari Cooper (14.5) have averaged this year.

After the game, Jon Gruden simply said Ateman “gets a game ball today.” The veteran head coach further doted on his rookie.

“But Ateman, gosh, we needed somebody to make a play,” Gruden said. “We’re short-handed. Somebody had to step up. We had a long way to go and that was a signature play of his career, and it helped us win a football game. [I’m] happy for him.”

Gruden went on about the choice to select Ateman during the draft.

“Edgar Bennett. I’ve got to give Edgar Bennett, our receivers coach, a lot of credit on that. He’s the one that pushed for him in the draft out of Oklahoma State, and he stayed in his corner the entire time.”

Following the win, Ateman was predictably grateful to his head coach and optimistic about the team’s trajectory.

“I really do see a bright future,” Ateman said. “I really do. We’ve got a great class, we’ve got great players. I’m just thankful to be a part of the first class. We’re going to get to a Super Bowl. I promise.”