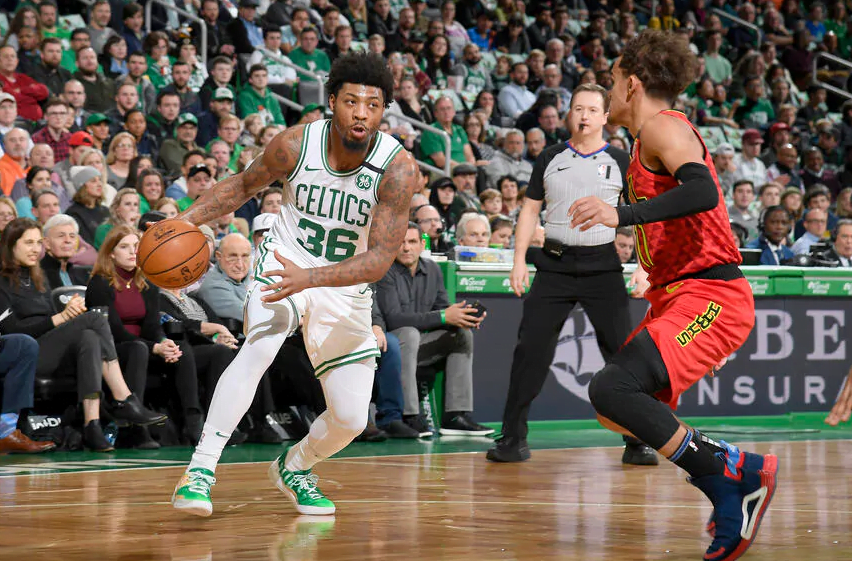 Marcus Smart’s and Trae Young’s careers at Oklahoma State and Oklahoma never overlapped. We missed those would-be classic Bedlams by five years. But after what happened on Friday night, I wish we could have seen a tilt between these two in GIA.

Smart’s Celtics, currently second place in the Eastern Conference, hosted Young’s Hawks who came in on a nine-game skid. But it was Atlanta that looked the aggressor early with the Hawks building an 18-point lead first quarter lead over the home team.

But it was in the waning moments of the game, after a second-half Celtics comeback, that the bad blood began to boil.

With less than a minute left and the Cs up 1, Smart knocked down a dagger 3-pointer, because of course.

A vintage Marcus Smart no no yes pic.twitter.com/sIbfk2KaUG

After a free throw pulled the Hawks to within 108-106, Young had a chance for his own game-winner, which was blocked.

The best part is Smart “inadvertently” tripping over Young as the clock was about to hit zeros.

Daniel Theis with the game winning rejection!!! Marcus Smart then does what Marcus Smart does 😅 pic.twitter.com/JGWhD4QmZy

Another look (from a different point of view).

The refs did not call Marcus Smart for a technical foul here. Speechless. pic.twitter.com/2EBXxv8WWc

Young was called for the personal foul while Smart and Atlanta forward Alex Len picked up offsetting technical fouls in the ensuing frenzy. Smart made the first of his two free ones and missed his second with 0.3 ticks to send the Hawks packing with their 10th straight loss.