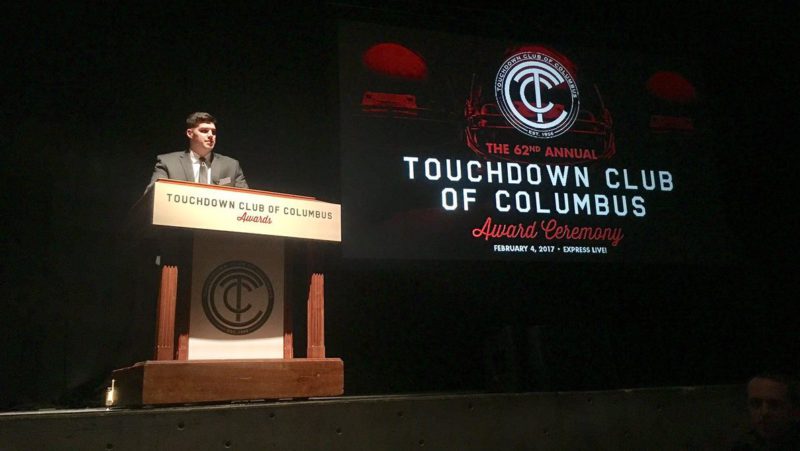 Mason Rudolph traveled to Columbus, Ohio this past weekend where he and teammate James Washington were honored as “Players To Watch in 2017” by the Touchdown Club of Columbus. Rudolph was asked about the honor.

“It’s big time,” said Rudolph. “You know, [with] any award you get, you don’t get here alone. You get here with help from your teammates and coaches and especially God and my family so a big shout out to them. A big shout out to James Washington for catching all my balls this year and putting Oklahoma State on the map even more.”

Here's @Rudolph2Mason before being honored at the Touchdown Club of Columbus Awards. #okstate pic.twitter.com/6StYde05Lh

The distinction between the Touchdown Club of Columbus and other organizations that give out college football awards is that they don’t just name a half dozen watch lists, counting down throughout the season. They honor several collegiate athletes from different sports who generate the most excitement for the coming season based on the previous year’s accomplishments.

Rudolph threw for 4,091 yards and 28 touchdowns with just four interceptions in 2016. Almost a third of those yards (1,380) went James Washington’s way. He was the first OSU receiver to average triple-digit yards per game and score double-digit receiving touchdowns for a season since Justin Blackmon did it in 2011.

The two are set to break all kinds of Oklahoma State records during their senior seasons and this honor likely spells just the first of many accolades for each.