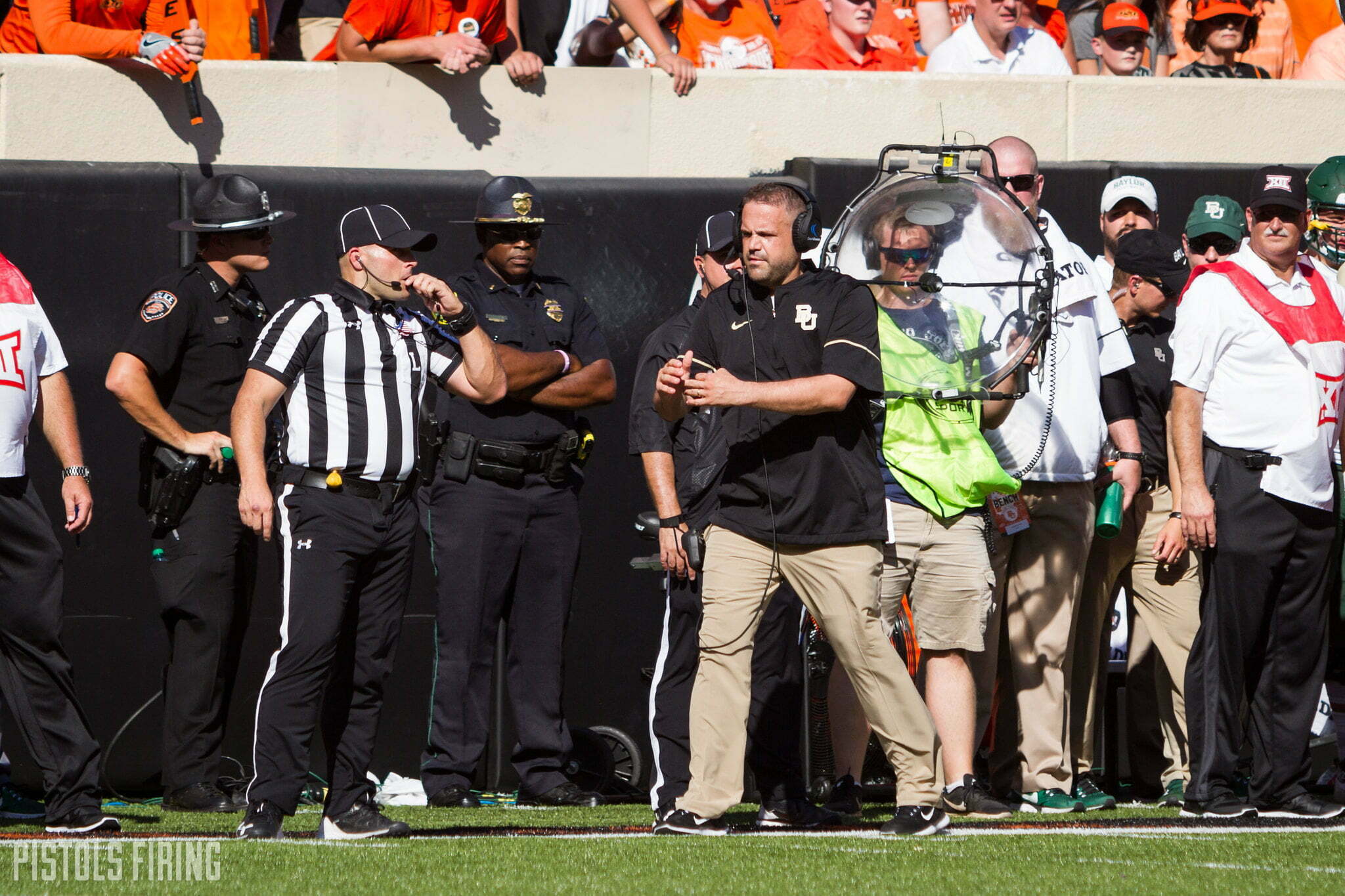 Matt Rhule is just in the third year of his rebuild in Waco, but the results have been nothing short of impressive. A program that was forced into a ground-up overhaul following the Art Briles fiasco, and was marred with shame, has made as quick of a turnaround as any Baylor fan could have hoped.

After winning just one game in Year 1, Rhule led the Bears to a 7-6 finish capped with a bowl win in 2018. Now he’s got Baylor off to a 6-0 start and enters the second half of his slate tied with Oklahoma for first in the Big 12.

Aside from his obvious and proven coaching chops, I’ve always found Rhule to be well-spoken and insightful. He says all the right things, but they don’t come off like it’s coach speak.

Ahead of his upcoming trip to Stillwater, Rhule had plenty to say about his next opponent, the 4-2 Cowboys, and he started with his counterpart, now the Big 12’s elder statesman, Mike Gundy.

Things like another disappointing loss heading into the bye week can make a fan base forget just how good they’ve got it, and how much worse things could be. Maybe Gundy has lost some of his edge. Maybe that’s unavoidable when you’ve been at any job for 15 years. But it’s important to remember just how much success Gundy has enjoyed during his tenure. Rhule laid that our perfectly and from a standpoint that those in the know, both coaches and otherwise, share about the mulleted one.

When asked about Chuba Hubbard’s historic pace through the first half of the season, he settled on that oft-overused (but not in this case) word.

“I mean, elite, in every sense of the word,” said Rhule. “What is kinda cool about Oklahoma State is they have an NFL-style run game. They are not a spread offense, they are a pro-style offense in terms of the things they do run-game wise.

“He runs the stretch outside zone, and he runs it as well as anyone in college football. He will put his foot in the ground and get vertical. He can outrun you if you are not careful. They do it in tempo and outrun people, and he’s getting 12 yards a carry. Then he has the ability to run insert plays. He’s physical. He’s got breakaway speed.

Rhule continued bragging on OSU’s running game by bringing up a point that I think we have too often overlooked, Spencer Sanders’ wheels. It’s something that’s easy to forget when your young QB single-handedly loses the turnover battle 5-nil, but it bears repeating.

Rhule didn’t skip over No. 2 either.

“He is as good of a 50/50 deep ball as there is,” Rhule said of Tylan. “His ability to go up there and track the ball is beyond elite. He plays as hard as any receiver you’ll see. They changed the crack-back rule, and that kinda hurt him because he is as physical a guy as there is. He de-cleated Verkedric [Vaughns] last year. He had one this year against Texas Tech. He is a physical guy.

“I love receivers when he knows he’s not getting the ball, he runs posts and clears guys out. He plays really, really hard. I think he is physical, but he is also a game breaker. He can go get the deep ball. Anytime you give him a one-on-one and you’ve got a quarterback that can throw the ball 60, 70 yards and you have a guy who can go get it, you have to account for hey they are going to take a shot with him.”

Despite the fact that Sanders has hit a rough patch during his inaugural campaign as QB1, Rhule has seen enough on the tape to know he can’t take OSU’s quarterback lightly either.

“I think Sanders is going to be one of the next ones who is up for all the awards,” said Rhule. “I think he is unbelievably special. He throws like 18-yard digs sidearm sometimes. The things he can do are really special. He is young, he is playing and he’s got Coach Gundy training him and their staff.

Needless to say, I left the viewing of Rhule’s press conference more fired up about OSU than when I started it. Let’s hope the Cowboys’ Big 3 can live up to his praise.