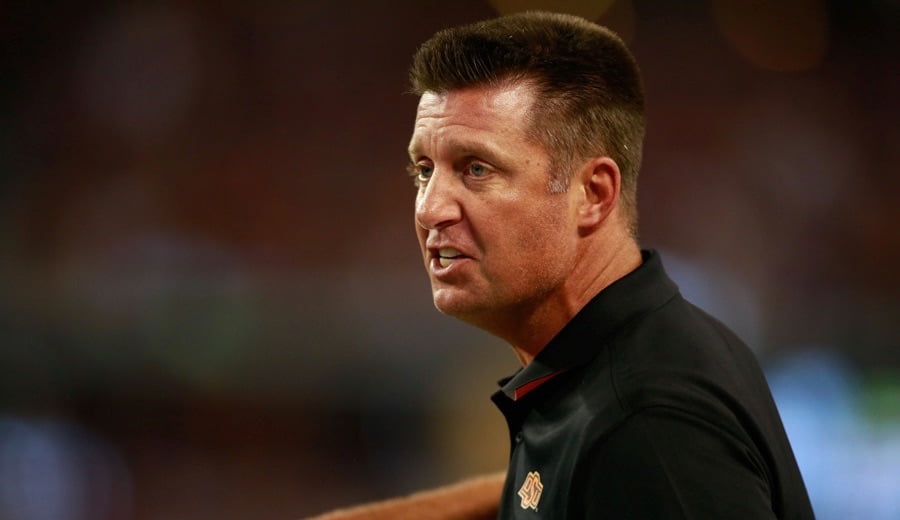 Mike Gundy doesn’t have time for your negativity. (USATSI)

Mike Gundy sat down with four reporters last week and, among other things, discussed his starting QB for 2015, why the O’Colly is run by a bunch of punks and how much negativity surrounds college sports these days.

We’ve already talked about the first two but I want to chat about the last one.

Here’s what Gundy told the Tulsa World about radio hosts and negative journalists:[1. I’m guessing I fall in the latter category.]

“All they do is comment on things and talk about who should be fired…I don’t support what I think is negative toward society, negative toward student-athletes,” said Gundy. “Daxx Garman, Mason Rudolph, (Samaje) Perine, Cody Thomas – they don’t deserve to be abused on the radio (by) adults.”

“You can say they are just like pro athletes, but they’re not.”

“Pro athletes, like Demarco Murray – someone told me he is about to make $4 million a year[1. I wonder who told him this…?] and I think he is worth more than that. I make a lot of money, so people can say what they want about me.”

“I would never step out there and say someone should be fired. To me, that’s too much, but I know this is the world we live in and I don’t care. Players don’t deserve that. Most of them are trying their butt off.”

First of all, is anyone saying a player should be fired? Benched? Maybe. Not thrown to or thrown to more? Definitely. But fired?

He goes on to say he used to attack players’ character when he was a young coach but learned how detrimental that was and how his team didn’t need it.

You should go read the whole thing.

“That is just negativity that the world is full with and we don’t need that. That is what makes things hard and it all comes back to this – everybody is trying to get to the story and they are trying to sell a story and they do it by being negative.”

I’m not sure if I completely believe this last part. Has he met Robert Allen? Also if you’re trying to “get to the story” that doesn’t always trend towards “being negative.”

I understand what Gundy is saying, though. I know this is going to be Hot Take Central for a minute but I actually think he’s right.

I don’t know what he considers “abuse” and I think everybody draws a different line, but it’s far too easy for folks to equate “didn’t hustle on defense against Kansas” to “is probably a lazy human being.” I’m not saying everyone does, just that it’s easy to.

This is the fun part of college sports though — writing about them anyway. When you cover pro sports you’re writing about an organization. You’re essentially writing about a business that produces sporting event outcomes as its product.

In college there’s more of a sense that it’s just about the game — for the players anyway.[1. I’m not sure all of them know this but 99 percent of them will go pro in something other than sports.]

The coaching culture is a different beast and one that should be handled appropriately but Gundy is right in that I’m not writing about a business when I’m writing about Mason Rudolph and James Washington.

I am if I’m writing about Kevin Durant and Kendrick Perkins. They are employees. I am a business writer covering a profitable organization in that case. They can and should be covered the same way Google or Apple or Wall Street is covered.

It’s an interesting twist that I hadn’t thought about in those terms until Gundy said this. It makes me wish we hadn’t gone so far down the path of “yeah these dudes should be paid because this isn’t amateur athletics anymore” as we have with the NCAA.

College sports is fun as an entity because it’s intramurals with much better athletes. My friends and I used to sit around and talk about our intramural games and joke about plays we ran or teams we beat (or lost to). I’m sure many of you did too. Or still do.

So yeah I think I’m in Gundy’s corner on this one even if that means eating some of the things I’ve written in the past. Maybe especially if it means that.