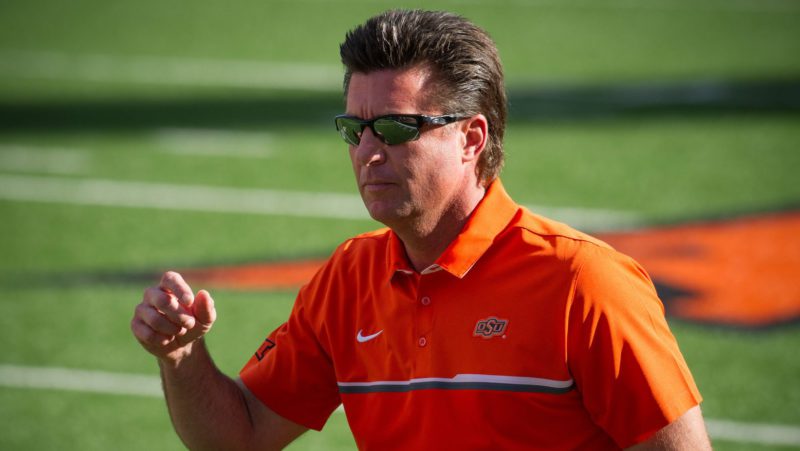 Mike Gundy and Colorado head coach Mike MacIntrye were on sight at the Valero Alamo Bowl Golf Classic as part of the media availability for their upcoming Alamo Bowl matchup.

As you can imagine, Gundy fielded a question about the recent coaching rumors including his name and a reported offer from Baylor. At least he was his normal, jovial self.

Hilarious response by Mike Gundy when asked if he turned down a 10-year, $60-million dollar offer from Baylor. pic.twitter.com/qJnekWl3Ti

On coaching rumors and his recent recruiting trips

“I didn’t hear half of what he said. No, I’m joking (laughter). That was pretty good, wasn’t it?

“As everybody knows, I’m fully committed to Oklahoma State. Fortunately enough I’ve been around really good players. When you win games, your name gets brought up. I’ve read about Coach MacIntyre’s name, so I’m going to push this off on him.”

Gundy on whether this has been a distraction for his players.

“Distraction is not really a big issue. Our players will be excited about practicing and getting back together as a group for another 10 or 12 days and being at a great location at the Valero Alamo Bowl for a week.”

Gundy was also asked about last week’s Bedlam loss and if it was tougher to get over than others.

“Every game that you end up on the wrong side of the scoreboard are tough to get over for players. As coaches, we understand the commitment.

“There’s about 132 teams that play at our level. Unfortunately half of them don’t win on Saturday. So if we were to ever hang our hat on a win or a loss every Saturday, this would be a sad profession, and it wouldn’t be a fun game to play for the players.

“There’s a bigger picture. Not to discredit, we want to win them all. But I get over the games really fast because I believe if we think one second about the past, that keeps us from thinking about being positive in the future, then that’s one second that doesn’t give us an opportunity to be successful the next day.”

Gundy is saying all of the right things at this point. Does it erase the whirlwind that transpired over the last several days? No. But at this point it appears that it’s business as usual.