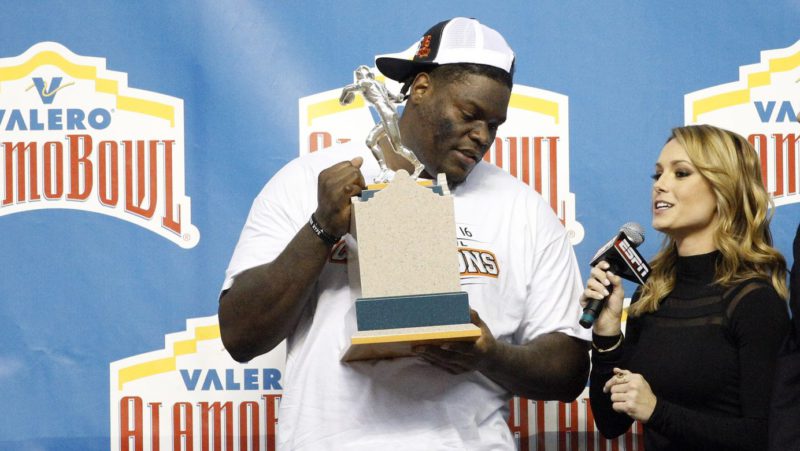 Gundy already has RSVPs from Mason Rudolph and James Washington for 2017 spring practice. So following the Cowboy’s 38-8 win over Colorado in the Alamo Bowl, Mike Gundy made sure to make his thoughts known about the future of one of his best players.

Gundy just now during the radio postgame: "Vincent Taylor needs to come back. He needs another year, and help us get a fast start next year"

Taylor who first made a name for himself in the spring of 2015 and earned a starting spot his sophomore year, just finished off his junior campaign in impressive fashion.

The Alamo Bowl Defensive MVP finished the year with 7.0 sacks and 13.0 tackles for loss (both are the highest of any interior defensive lineman during Gundy’s tenure). He also amassed 51 total tackles (28 solo), a pass breakup, two QB hurries, two forced fumbles and four blocked kicks.

Taylor’s return would be huge for a Cowboy defensive that will look much younger in 2017 after the losses of Jordan Sterns, Jordan Burton, Ashton Lampkin, fellow tackle Mote’ Maile, and others.

“We haven’t had very many players here I felt like were ready to enter that level of football as juniors,” said Gundy a few weeks ago. “That’s including Weeden and Blackmon and Russell Okung. Even though they were great players, I didn’t feel like they were ready for what that level can put out there or put in front of those guys. That’s my opinion.”

Whether Taylor is actually going to come back is going to be interesting. There is already talk that if he got the proper NFL grade he will leave. And his comments after the game did not dissuade anyone from thinking that.

Vincent Taylor on his senior season: "We shall see. I'm gonna talk to God about it, then talk to my parents about it. We'll go from there."

It helps to have professional football players on a college team. Gundy knows that. That’s why he commented on Taylor on Thursday (which he rarely does). Because he knows 2017 is shaping up to be something spectacular, and his defense needs all the help it can get.