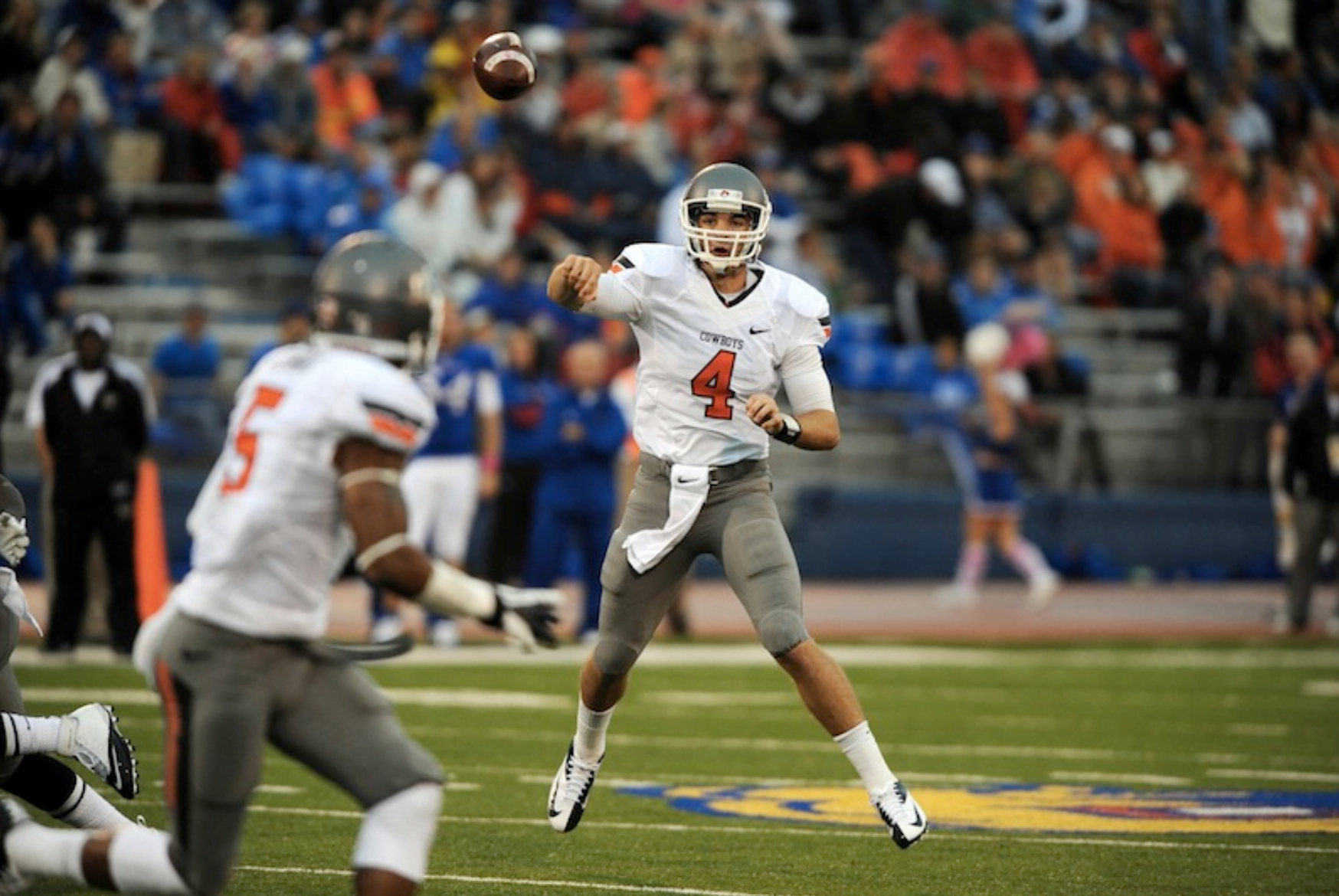 This is Part 1 of a six-part series on Oklahoma State recruiting that explores the relationships, the connections and the gold mines Mike Gundy has gone to over and over again in his time in Stillwater, USA.

Much like salespeople attack a set of clients with a game plan – first, second, third options; tactics to get a foot in the door; skills to close the deal – college football recruiting has turned into a business.

Since Oklahoma State coach Mike Gundy was hired in 2005, his program has been no different in its approach.

In 2011, Oklahoma State had one of its most successful recruiting classes ever, and three boys from Denton Guyer High School highlighted it.

One turned out to be among the most talked-about receivers in Cowboy lore. He tried his hand in the NFL but was bounced and recently retired.

Another, a defensive end, had much of the same path, spending time with the Oakland Raiders and Denver Broncos after pairing with maybe the most disruptive player in Cowboy history, Emmanuel Ogbah.

And the last certainly wasn’t the most statistically-inclined OSU quarterback, but he has gone down as one of the most beloved players to ever come through Stillwater, America, and now has aspirations of becoming the head coach there.

In 2017, coach Mike Gundy dipped his feet back into the pool at Denton Guyer in north Texas. He came out with a safety by the name of Thabo Mwaniki.

Between 2011 and the Cowboys most recent recruiting class, there has only been one player to continue the connection between Guyer and OSU, Dominic Ramacher who signed in 2012.

So why did Gundy go back?

Josh Stewart, Jimmy Bean and J.W. Walsh paved the way for Gundy’s splurge back to the north side of the Dallas-Fort Worth Metroplex. But Mwaniki, an undeniably talented player, is surfing in their wake.

The nature of recruiting seems simple on its face, but it takes a web of connections, an understanding of the student-athlete, trust and most importantly, success.

Gundy has helped breed a more dynamic take on recruiting, hitting on the fit, not the ratings, but even still, his success stories on the trail have begotten more success stories.

DeSoto High School, nestled in the hills south of Dallas, has produced six signings, the most of any high school in the nation. Gundy pulled Chris Lacy in 2014. Two years later, his staff went back and earned commitments from LD Brown and A.J. Green.

Lacy has been a strong, steady receiver who, in a year of inexplicable depth at the position, will no doubt be looked at for the NFL. During OSU’s season-opener against Tulsa this season, the TV broadcasters gave the same evaluation of Green, a first-time starter at cornerback.

DeSoto coach Todd Peterman said Lacy is “special,” and back home his journey has had a huge impact on the younger players looking to play in college.

“He’s the cream of the crop for anyone, so what a great representative for DeSoto,” Peterman said. “Does that factor in? It definitely does.”

Gundy came into an already-flourishing relationship with DeSoto. Victor DeGrate was signed in 2003 as an inside linebacker under Les Miles. Peterman was quick to cite his impact as well.

But Gundy has had to work into other connections, and there is no greater example of a successful one than Guyer.

As mentioned, 2011 was a trademark year in the connection between coach John Walsh’s Guyer program and Gundy’s at OSU. J.W., Stewart and Bean all had lasting impacts at both places, which not only helped land future recruits but also embedded an affinity for Stillwater beyond the locker room walls at Guyer.

“The school turned orange,” Walsh said. “When those guys went to OSU, people were following. It’s crazy the number in ’11, ’12 and ’13 how many regular students were going to OSU from Guyer.

“It was nuts. Really nuts.”

Stewart, who now helps train potential recruits, said he endorses OSU, and if the athletes show interest, “they’re gonna hear from me.” He also made a claim that holds true through 2017.

“If a guy from Guyer gets an offer from OSU, he’s committing,” he said. “It’s done.”

When J.W. and Stewart were looking at colleges, J.W. hopped from school to school. One week, it was TCU, then Texas Tech and after years, Stewart pulled up Dez Bryant’s highlights.

They were hooked, and that hook turned into a chain.

Now as the running backs coach at Abilene Christian, J.W. said he is already seeing the business aspect of recruiting coming into play. He said he tries to imitate what Doug Meacham and Dana Holgorsen did with him as a recruit with honesty and consistency and trust. But one of the biggest things is making sure those players are ready in the weight room to make the transition.

Coach Walsh at Guyer said, bias aside, the strength program there is among the tops in the nation because he has designed it to duplicate coach Rob Glass’ at OSU. So when J.W., Stewart and Bean got up to Stillwater, they were leading their freshmen position groups in every lift.

Success is an elixir in any business, but it has proven to be only one of the ways Gundy has developed lasting relationships in recruiting.

It’s about trust and culture.

Tuttle High School is about 15 percent the size of Jenks, but the small 4A school has produced just as many signings for OSU as the nationally-known power in Tulsa. And after the 2018 recruiting class is announced, coach Brad Ballard’s program will likely have more with three, including Bassett brothers Cooper and Dawson, and four if you include walk-on star Blake Jarwin.

Ballard and Peterman both went to OSU, and though they deny any partisanship, the track records speak for themselves, particularly at Tuttle.

Offensive line coach Josh Henson was hired at OSU in February. He graduated from Tuttle before playing for the Cowboys, and less than two months after he was hired, Henson earned his first commit, Hunter Anthony, a three-star tackle from his hometown.

Ballard said Henson’s history in Tuttle has (and will) reap benefits for OSU and the small, rural school with gravel parking lots. But more than that, more than the Sooners’ connection with former Heisman Trophy winner Jason White, the trust and familiarity between both places transcend any kind of sales pitch.

“If you look at communities in this state, OSU fits here,” Ballard said. “We have old agriculture professors from Oklahoma State that have farms here. We’ve got the old wrestlers, the old baseball players. There are just some roots like that in this community.”

Much of the same can be said about North Shore High School more than nine hours away from Stillwater in southern Houston.

Coach Jon Kay has been there for decades. So, too, has his assistant Steve Lewis. They were there when Les Miles completed the biggest signing in OSU history in Bobby Reid. They were there even before that for Ricky Coxeff.

Since Gundy took over, the stunning pipeline between North Shore and the Cowboys has continued. In 2009, Andrae May went. In 2010, Larry Stephens. A year after that, Miketavius Jones. And another year after that, in 2012, Paul Lewis committed to Gundy’s program.

There has been no other pattern like that since Gundy took over, not even close, with four signings in as many years. Coach Lewis (not related to Paul) said those years were truly remarkable, and it started with the transparency on both ends.

“Those guys knew what they were getting out of us,” Lewis said. “There wasn’t any smoke and mirrors going up. It was just one of those magic times for the marriage of the two schools.”

And as the trust grew between Joe DeForest, the former recruiter in that area, and the coaches at North Shore, the fit became more apparent. Although Coxeff, Reid, May and the others had an effect on who was to follow, the similarities between the structure of the programs was astonishing. 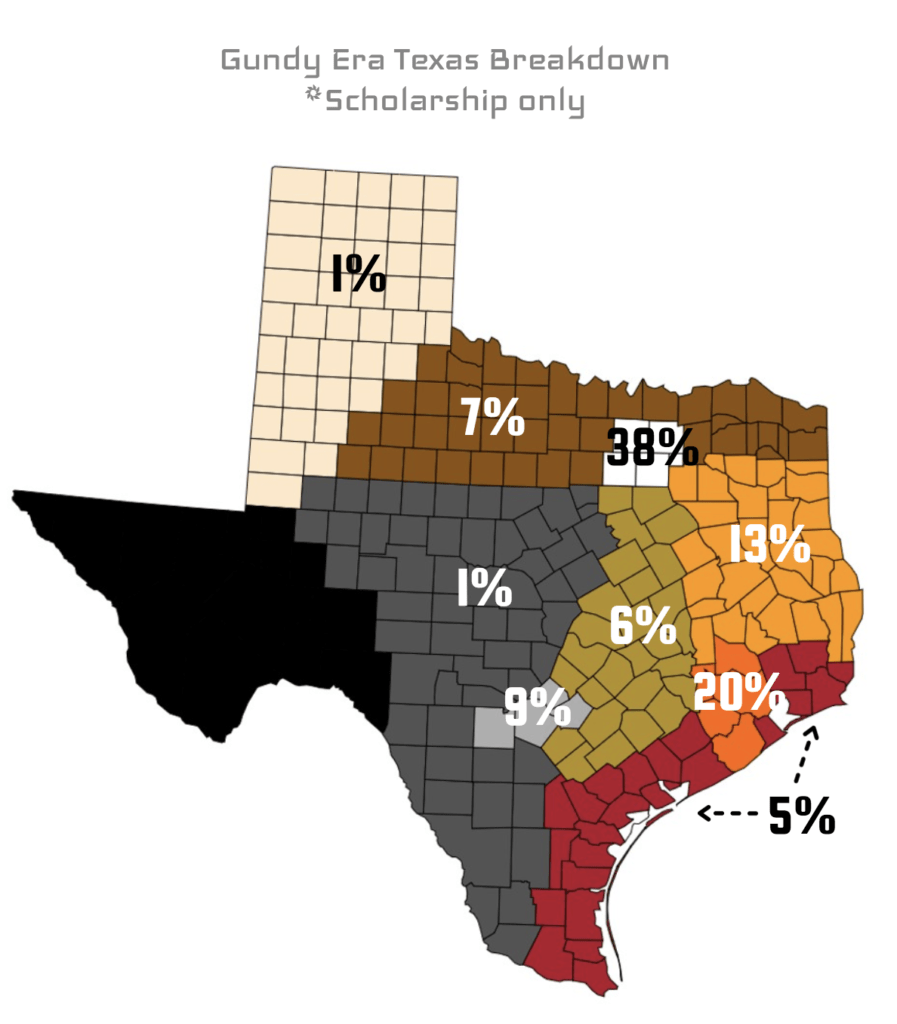 “I’m pretty sure there wouldn’t be too much of a skip or a hiccup if all of a sudden tomorrow we flipped staffs,” Lewis said. “I don’t think there would be a whole lot of drop off if you took coach Kay and put him up at OSU. … And there probably wouldn’t be much change if coach Gundy came down and sat in that chair for a couple weeks.”

That was the response from most of those interviewed for this story. The mold made the transitions seamless. In fact, at one point, there were rumblings of Gundy potentially hiring Walsh away from Guyer.

The relationships run that deep.

There are countless stories of good, successful business in recruiting since Gundy took office, too many to include in this part of the story.

Butler Community College sent six players to OSU in two classes, one of which earned Big 12 honorable mention and another who started as a rookie running back in the NFL this season. 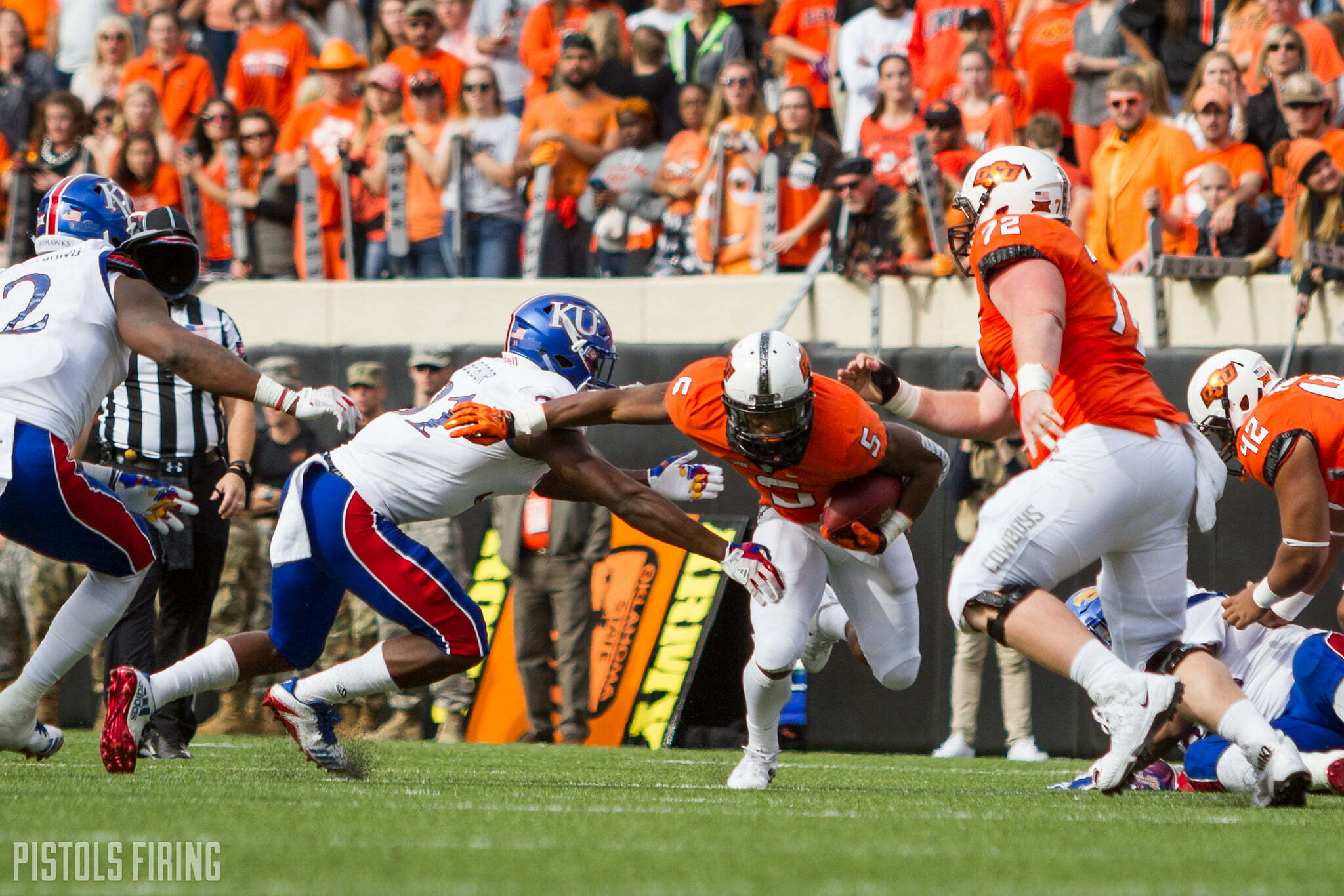 And there have been several players who played at Booker T. Washington High School in downtown Tulsa who have gone on to play under Gundy. All of them were (and are) studs.

The business is far-reaching and complex. There are a bevy of tactics recruiters use in capturing that fourth or fifth signing from the same high school or junior college. Gundy’s assistants could point to the success stories like Lacy at DeSoto or the trio from Guyer. They could rely on their transparency and hope their truthfulness is repaid. Or they could just point to the state of the program.

“Recruiting is still a people’s business, even though it’s changed considerably and it’s getting ready to change even more so,” Gundy said. “In the end, it’s no different than a guy that sells a product door-to-door.

“If you go buy a car from somebody and they take good care of it; and they service it and you can trust them; and they don’t nickel-and-dime you to death, you’re probably gonna go buy another car from that guy. Recruiting is the same for us.”