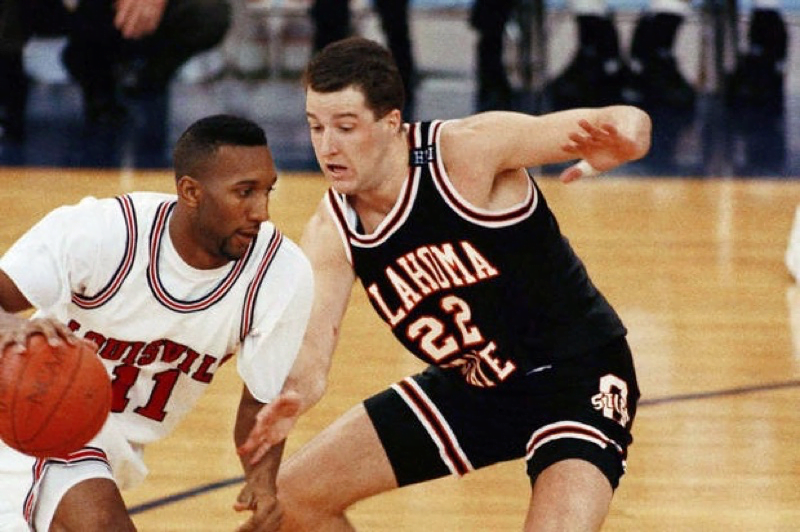 Kyle Porter and OKC Dave recently traded about 10,000 words of emails on the most underrated Oklahoma State basketball players of the Eddie Sutton era (and onward to the present day). Because we don’t want to run one 10,000-word post, lest you all skip over it, we’re going to start releasing their list two at a time in no particular order. First up were Mo Baker and Le’Bryan Nash. Then Vic Williams and Adrian Peterson. OKC Dave is back on the clock.

My next guy is my first favorite OSU player, Brooks Thompson. Carson mentioned him on the podcast and said it was the passage of time that has made him underrated, and I agree. People that saw him play knew he was special, but enough time has gone by that he has to be on this list.

Let’s go through the accolades: First round draft pick. 17 points, 6 assists, and 3 steals (!!) per game in his senior year. He shot 47 perecent from three that year on over 200 attempts, for real. Look it up. It’s the best 3-point shooting season by any OSU player, and in the last 28 years of college basketball only 22 guys have done that. Doug Gottlieb called him the best point guard in OSU basketball history.

Watch this clip of a 1994 Eddie Sutton show starting at the 3:20 mark. Brooks knocks down a three, hits a transition jumper, runs through a pass and gets a layup, then gets an and-1 and ignites the crowd. Eddie says, “The young man plays with a lot of emotion” and that’s what I really remember about him – he was such a smart but emotional presence.

For a long time I thought Brooks would come back to OSU as head coach. Sadly, he passed away in 2016, but I promise you the people that saw him play will never forget him.

Brooks is a good one, he was definitely on my list. He has the highest NBA 3-point percentage of any OSU player ever (min. 100 games).

I’ll go with another guy from the early 90s as my next one. Byron Houston is thought of highly by most OSU folks, I imagine, but not highly enough. Here are his career rankings in the OSU record books.

He was a three-time All-American and a three-time All-Big 8 first-teamer. A first-round pick. The 1991 Big 8 Player of the Year. And sometimes I feel like we view him as the same as, I don’t know, Fred Jonzen (no offense to Fred). It obviously has not gone well for him post-hoops (you should read this), but he was an unbelievable player that doesn’t get enough credit when we talk about the last few eras.

The rest of our staff tried to block me from putting him on our wine cellar team, and I had to threaten that I’d go on strike just to shoehorn him on the team. He was one of the eight best players in the country in 1991-1992 when guys like Shaq and Christian Laettner were cruising around college hoops.

Houston is the on-court standard by which all bigs in Stillwater should be measured.

I didn’t even consider Houston because of where he stands on all of the all-time lists, but I think you are right. His very public personal issues have kind of made it so people just don’t talk about him anymore. He was dominant.