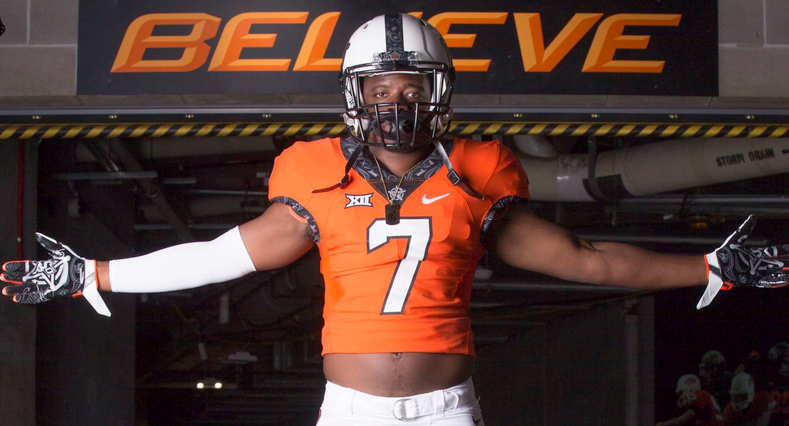 With the start of the early signing period on Wednesday morning, Oklahoma State started its official class with an in-state star — four-star tight end Grayson Boomer — sending in his NLI first.

Follow along with the rest of the developments this morning in our continuously updating live blog.

Boomer is OSU’s top-ranked commitment in the 2019 cycle. He picked OSU over Iowa State, LSU, Nebraska, Texas and others. A Collinsville, Okla. native, he has family ties to OSU and is slated to slot in at OSU’s hybrid Cowboy back position. – KB

Jackson hails from Hutchinson C.C. He picked up a late offer from the Cowboys following the transfer of J.D. King and NFL declaration of Justice Hill. He’s a 6-foot, 220 pound running back who brings both size and speed to OSU’s backfield. -KB

Another three-star OLB from Evangel Christian Academy in Shreveport, Louisiana comes in as the No. 91 outside backer in the nation and 44th overall prospect from the state. -KC

A 6-foot, 195-pound Aussie punter, Tom Hutton is coming from ProKick Australia — which has produced numerous Division I punters — and is slated to compete for a starting job right away. -KB

Michalski was the heart and soul of a St. Thomas Aquinas High School team that ran the football a lot. He is a listed tackle who, at 6-4, 270, brings with him prototypical size with room to grow into his meaty frame. He picked OSU over Cornell, Dartmouth, North Dakota and others. -KB

Kody Walterscheid is following in the footsteps of older brother Cole, OSU’s incumbent starter at defensive end. Kody is potentially the better athlete of the two, though time will tell if that translates to better production. He’s more built-out than Cole was coming to OSU and at 6-6, 230, he has some intriguing upside that Robert Glass will surely tweak over the coming year. -KB

Trace Ford out of Edmond Santa Fe is the second-highest ranked commitment in OSU’s 2019 class. He committed to OSU over Arkansas, Baylor and a bunch of other high major programs. He’s a super skilled athlete who in high school played linebacker, defensive end, and wide receiver. I’m betting on him to be a star in OSU’s 4-2-5. -KB

A fringe four-star prospect, Cole Birmingham was a mauler in HS who paved running lanes for four-star running back Deondrick Glass — one of OSU’s top remaining targets. He picked OSU over Arizona State, Arizona, Colorado and more than 25 other offers. -KB

The Cowboys welcome three-star defensive back Demarco Jones from Booker T. Washington in Tulsa. The former secondary mate of Dax Hill is a playmaker in his own right. At 6 foot and 175 pounds, he has ideal size for a corner, and his reported 4.7-second 40 time will help him run with the Big 12’s elite receivers. -KC

OSU adds some needed depth to the interior of its D-line with Jayden Jernigan. The three-star d-tackle ranks 41st among his position nationally and held 17 offers from half of the Big 12 as well as Oregon, Minnesota and Washington. -KC

The three-star outside backer hails from Skyline High School and is the No. 88 OLB according to 247 Sports and the No. 161 recruit out of the state of Texas. He was the 17th commitment of the class making his pledge public back in September. -KC

Player is the latest in a long line of Cibolo Steel players for Mike Gundy. The 5-11.5 cornerback was not highly recruited, but he joins Deionte Noel, JayVeon Cardwell, Jordan Sterns and Ryan Simmons as former Steele players at OSU and could backup former teammate Cardwell at some point.

“It makes me feel great to know that I’m going to be part of that great list of names,” Player told the San Antonio Express-News. “That’s something that will never be forgotten. The coaches up there call it ‘Steelewater’ because they love the Steele boys. Just being in that pipeline is a great feeling.” -KP

After losing Darrion Daniels late in the cycle, likely to grad transfer, Sione Asi promptly accepted his scholarship offer and committed darn near on the spot over New Mexico. A Snow College product who will be a junior, Asi brings experience to the defensive tackle position and, at 302, a big body to help stuff the run. -KB

Another of OSU’s incoming offensive line talents, Taylor Miterko is one of the most sought-after who ultimately picked OSU. He strongly considered Baylor, Boise, Texas Tech and Arizona State in his recruitment. Miterko is a 6-5, 270 pound prospect from Carlsbad, New Mexico. -KB

Wilson is a top 10 center nationally who was also offered by Arizona State, Baylor and Boise State. He comes from Denton Argyle and may have the sickest mustache of any of OSU’s commitments. Wilson is already 6-4, 280 lbs. and should fit in nicely on OSU’s offensive line into the future. -KP

Isuman-Hundley is a 6-5 DE out of Colleyville, Texas who was offered by the usual suspects — Baylor, SMU and Houston. Isuman-Hundley, who is from Nigeria, didn’t start playing football until early in high school but has a great frame for the future (the next Emmanuel Ogbah?)

“I didn’t know anything about football,” he told USA Today. “When I was in Nigeria, that’s not what we called football. At first, they put me at wide receiver, which didn’t work out well.” -KP

Thomas Harper is the younger brother of OSU linebacker Devin Harper. He’s a 5-foot-11 athlete who wowed as a receiver at Karns High School in Tennessee, but is slated to play on defense — either at corner or safety — in OSU’s system. He’s a three-star recruit but when he came up for a camp at OSU this summer, he didn’t look out of place with the other top-end talents in Stillwater. -KB

The Cowboys signed Brendan Costello, the No. 16 dual-threat quarterback in the nation out of San Clemente, California despite a late push from Georgia. Costello joins the likes of Spencer Sanders and Dru Brown in a suddenly deep and talented QB room. -KC

Despite some buzz to the contrary, Texas never officially offered Xavier Ross, the three-star d-tackle from nearby Cedar Hill. Ross committed to the Cowboys back in May and the 6-3, 285-pounder adds needed depth to OSU’s defensive front. -KC