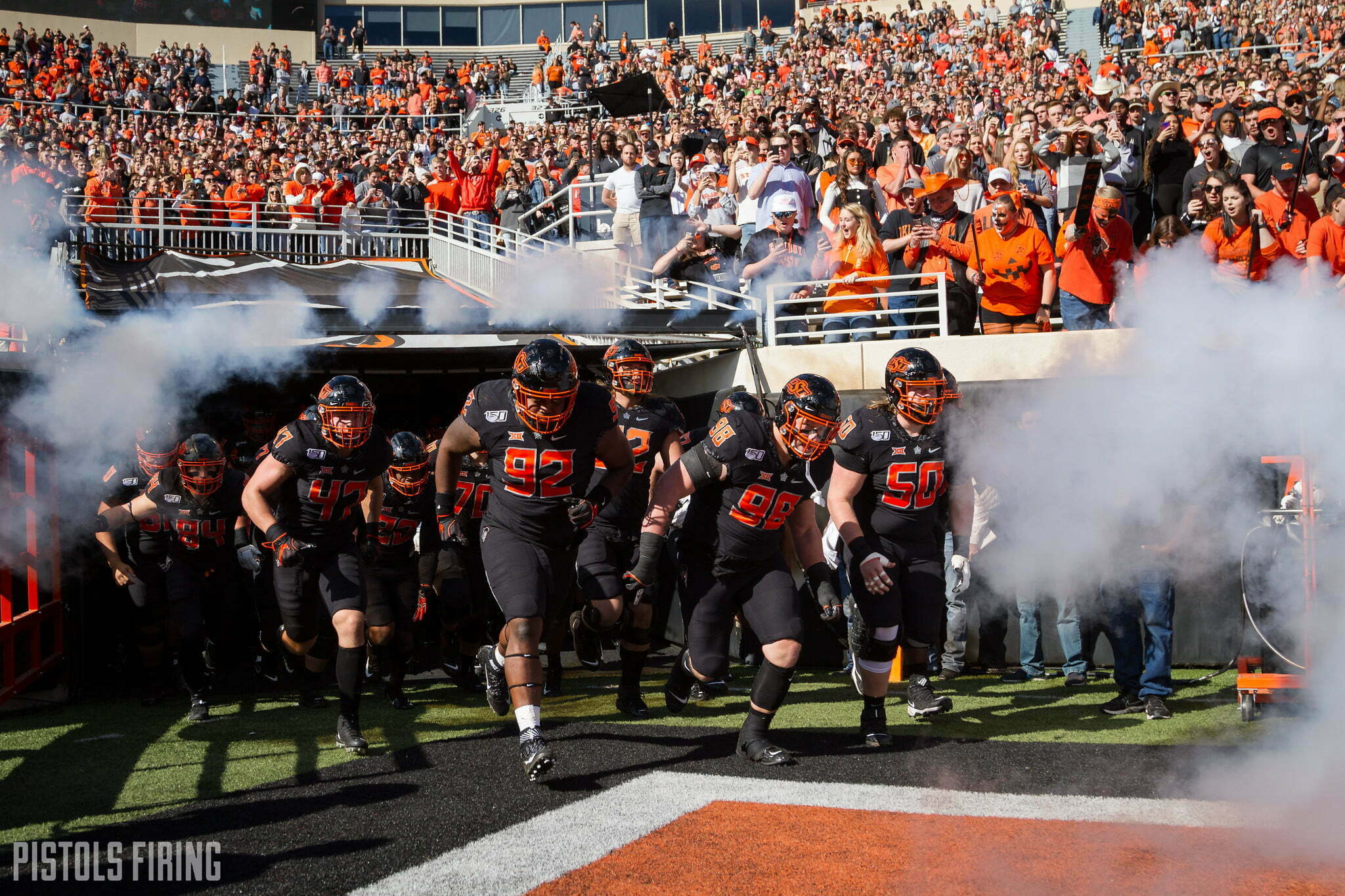 Future Cowboys from all over the country (but mostly Oklahoma and Texas) can begin signing their national letters of intent.

The early signing period for the 2021 class starts Wednesday and lasts through Friday. As the letters come in, we’ll update this post throughout the next couple of days with profiles on each of the future Cowboys.

Entering Wednesday, OSU has 19 players committed to its 2021 class. OSU was also able to count 2021 scholarships for Tay Martin and Dominic Richardson, who are already with the Cowboys. So, if all 19 of those players sign, the Cowboys will have used 21 of their allotted 25 scholarships for the class, meaning there is some room for late movement.

The rankings next to each prospects star rating is their national rank, their position rank and their state rank, per 247Sports composite system.

Cox on Gay: An athletic playmaker who’s made most of his highlights on offense, the Cowboys are eyeing the shifty receiver as a cornerback at the next level. Jim Knowles is hoping he can catch some passes for his group.

Scott on Oliver: Edmond-Santa Fe’s defensive factory has done it again. Collin Oliver is next in line from the high school that produced Calvin Bundage and Trace Ford. Oliver primarily lined up at defensive end as a high school senior, but he has the speed to play just about anywhere. He finished his senior season with 17 tackles for loss, including four sacks. He is quick, he has active hands and he is a guy Rob Glass should be able to turn into a monster.

Scott on Nobles: At 6-foot-6, 260 pounds, Logan Nobles has a frame primed for developing, and OSU seems to be an excellent fit to get that done. Coming off a state championship season with Jenks, Nobles will likely spend his first few seasons in Stillwater getting bigger and stronger under Rob Glass, but he possesses the tools to develop into a future contributor on Charlie Dickey’s O-line.

Cox on Stephens: Stephens has experience both at safety and outside linebacker but played the rover LB position for Del City in 2020 after the Eagles switched to a 4-2-5 scheme — the same base defense he’ll play in at OSU. In it, he was disruptive racking up three sacks, two pass breakups, a forced fumble and an interception.

Boone on Barr: OSU scooped Silas Barr out of the clutches of North Texas. After he committed to the Mean Green in July as a little-known two-star talent, he flipped his commitment to the Cowboys in October. The 6-foot-5, 250-pound recruit played defensive end and offensive line in high school, and OSU sees him as an offensive lineman. He is raw and still needs to mature physically, but he has a great frame and has a lot for offensive line coach Charlie Dickey to work with here.

Scott on Bray: Among Oklahoma kids in OSU’s 2021 class, Jaden Bray is probably the least talked about, though I’m not sure why. His 6-foot-3 frame and outstanding athletic ability provides a lot of promise in the embarrassment of riches that is Kasey Dunn’s wide receiver room.

Boone on Kelley: If Mike Gundy were to create a player in a lab, the finished product would be Aden Kelley. The small-town kid from Thomas, Oklahoma, is a farmer in his spare time with a work ethic on and off the field that’s drawn nothing but rave reviews from those around him as he’s risen in the recruiting realm over the last year. Kelley is the highest-rated signee in the 2021 class and a potential early contributor for OSU next season, even at a defensive tackle position that, typically, requires polishing and physical maturation. Think Darrion Daniels size-wise — a blue-chipper defensive lineman who can elevate the play on the interior of the defense immediately.

Cox on Smith: Speed, size and athleticism. That’s what the Cowboys are getting in two-way star, Makale Smith. Smith played receiver and cornerback for Midwest City, but the Cowboys have tabbed him to help backfill their secondary. He’s got the tools to cover Big 12 wideouts, and the hoops star also has the ups to make a few plays on the ball.

Boone on Smith: Keeping in line with OSU’s prioritization of long athletes, Cam Smith, a 6-foot-1 talent from Denton, Texas, is a two-way acquisition who played receiver and corner in high school. That size should allow him to seamlessly transition to cornerback at OSU because of his ball skills. He’s a high-point king who can attack the football with ferocity and has the aggressiveness and competitiveness to become a star at corner. One of my favorite prospects in this class.

Boone on Martin: OSU is betting on talent, mobility and upside in Nick Martin, the Pleasant Grove athlete who played running back and defense in high school. He has good size and quickness and looks to be fully healed from an ACL tear in 2019, having starred last season on both ends of the field and garnering interest from colleges near and far. Martin is expected to play linebacker at OSU, and the speed that spurred his success as a running back should do wonders for his chance to make an impact on defense at OSU.

Scott on Nixon: Jaden Nixon has a lot of positive tools that make you wonder how he is rated as low as he is. Nixon is a speed back with solid vision who should develop, at the least, into a high-level third down back with his ability to also catch the football. As most incoming freshmen, Nixon will need to develop some with Rob Glass, but we could look back in a few years and see Nixon as the steal of the class.

Cox on Green: Much like the Wallace twins four years ago, Bryson and Blaine were a package deal, but Blaine is anything but an afterthought. He’s a talented receiver (who’s an inch taller than his brother) who made plenty of plays of his own, racking up 1,063 yards and nine TDs as a junior in 2019.

Cox on Green: Stop me if you’ve heard this before: OSU has signed a pair of touted twin wideouts from Texas. Bryson Green, the second-highest rated member of OSU’s class, is the whole package. He possesses speed, ball skills and can make plays after the catch. He can also lay the wood on dudes as a blocker, a la Tylan Wallace. He could be the next big thing at OSU.

Boone on Rawls: Defensive coaches at OSU love to fill secondary spots with players who have good ball skills and length, and Lyrik Rawls checks both boxes. The 6-foot-1 Marshall, Texas, standout played safety and receiver in high school and really shined on defense where his ability to track the ball and close quickly on receivers stood out. In Jim Knowles’ system it looks like he should be a perfect fit to patrol the secondary a la Tre Sterling and Kolby Harvell-Peel.

Scott on Williams: Late in Ty Williams’ recruiting process there was some chatter about him flipping, but luckily for OSU he didn’t. Williams is an athlete in every sense of the word. He missed most of his senior season because of injury, but Williams is a four-sport star at Muskogee High, excelling in football, basketball, track and wrestling. Williams played safety and quarterback for the Roughers. To go with his athletic ability, Williams also has good length and instincts and should fit right in with OSU’s secondary.

Cox on Beamon: Class of 2022 commit, De’Kelvion Beamon, has reclassified to come to Oklahoma State a year earlier. He’s got a big enough frame to match up against Big 12 wideouts, but the track star is also fast enough to keep up with them. He adds even more depth and talent to a deep and talented Cowboys secondary.

Boone on Etienne: OSU needed experience and size to bring in along the offensive line to replace Teven Jenkins and Josh Sills, and in Caleb Etienne the Cowboys got it. The 6-foot-8 Butler Community College product has ideal size for an offensive tackle, two years experience at the junior college level and credentials to contribute early. He was ranked by 247Sports as the No. 2 overall prospect at his position in the junior college ranks, and he picked OSU over offers from Arkansas, Houston, Ole Miss, Texas Tech, Oregon and others.

Scott on Latu: A late addition to the Pokes’ class, Latu’s story is intriguing. He signed with BYU in the 2018 class before going the junior college route. He is massive coming off the edge at 6-foot-4, and he is violent at the point of attack. Depending on how much turnover OSU has on its defensive front this offseason, Latu could be a contributor as early as next season.

Scott on Warren: OSU’s second surprise of signing day comes in the form of Utah State transfer Jaylen Warren. Warren is a cannonball at 5-foot-8, 225 pounds. He started his college career at the junior college level at Snow College before transitioning to Utah State. If 15 games with the Aggies, Warren had 151 rushing attempts for 821 yards and eight touchdowns. He played three games as a senior in 2020, but with this year not counting toward eligibility, he’ll enter OSU with the option to play or redshirt in 2021.

Scott on Jarrard: OSU’s Cowboy back position demands versatility, and that’s what Austin Jarrard provides. He played at American River College (CA) in 2019 where he was doing everything from pancaking defenders to making diving catches across the middle. As a freshman in 2019, Jarrard caught 26 passes for 310 yards and three touchdowns. His recruiting process was definitely hurt with junior colleges deciding to not play in the fall, but the Cowboys won’t complain at his lack of suitors.