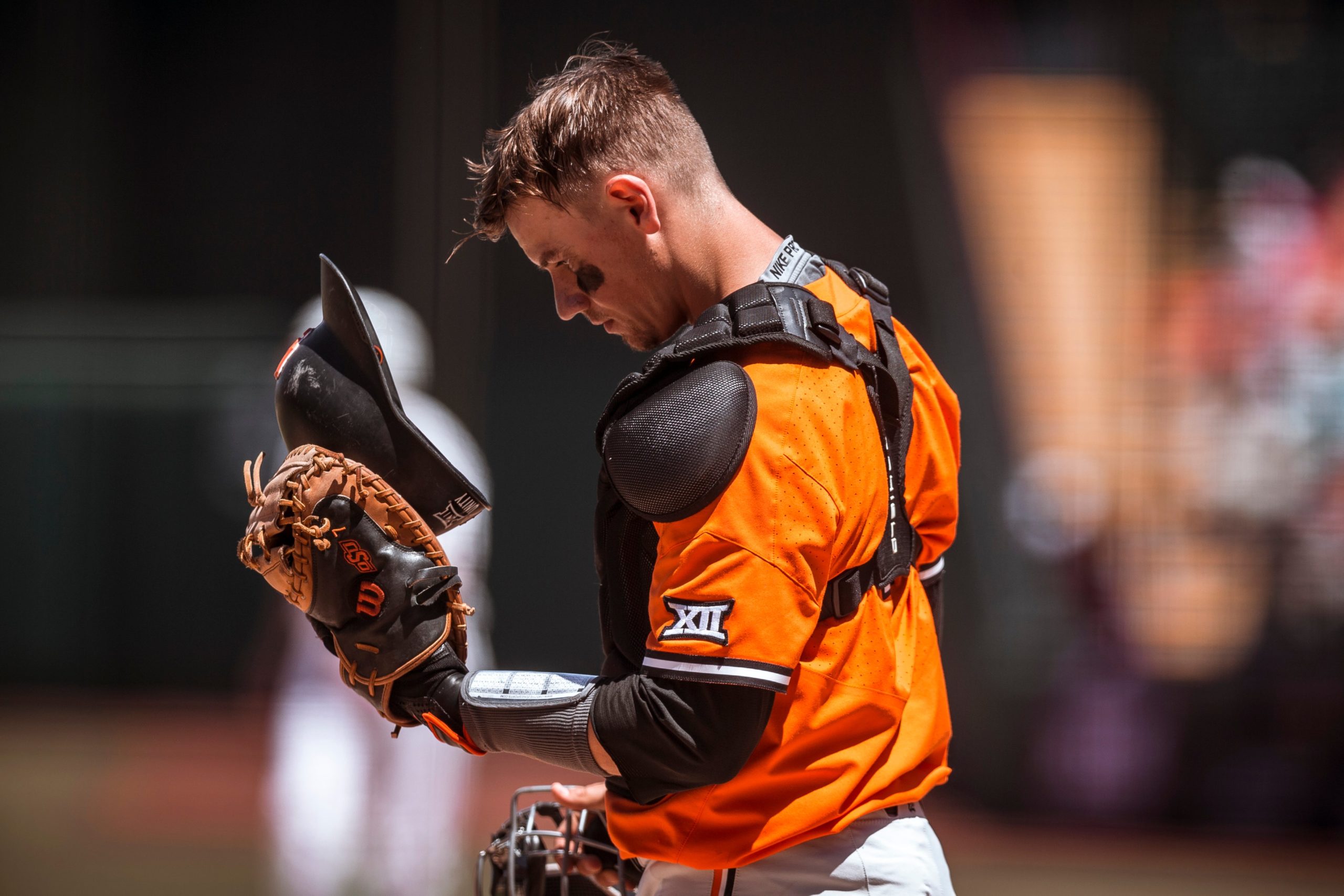 Max Hewitt doesn’t wear batting gloves; he says he likes the feel of not wearing them. He will, though, occasionally rub his hands in the dirt before stepping into the batter’s box.

It’s a small thing, but in some ways it describes the type of player Josh Holliday and Oklahoma State plucked from Connors State College.

Hewitt came to Stillwater as a middle infielder, starting nine games as a sophomore in 2018 split between shortstop and second base. In 2019, Hewitt made 17 starts at short and two at third. That made his move to catcher before the 2020 season all the more interesting.

Hewitt said he came in during an off day to catch one of his teammate’s bullpen sessions out of courtesy when someone saw him walking around in the gear. With OSU losing longstanding starter Colin Simpson to graduation, that set the wheels in motion to move Hewitt behind the plate.

“I was really just willing to do whatever it took to get on the field at this school and be a part of this in whatever way shape or form,” Hewitt said. “An opportunity manifested itself at the end of last fall, and I wanted to take it and run with it because I really wanted to be a part of this. With KP [Kaden Polcovich] and Huey [Hueston Morrill] in the middle of last year, that wasn’t going to be a spot for me. It just wasn’t, and that’s OK. I love [catching]. I’ve loved the challenge of learning how to do it.”

When Hewitt stepped behind the plate in OSU’s season-opening series against Grand Canyon last season, it wasn’t the first time he caught, but it had been a while.

Hewitt said he didn’t catch much in high school at Eastview Secondary School in Barrie, Ontario, Canada, where Hewitt also played basketball and hockey. Hewitt said he was too small in high school to catch. He was listed at 173 pounds on OSU’s 2018 roster. He is now up to 197.

A lot of Hewitt’s early years behind the plate came in the bullpen of the Barrie Baycats, a semipro team in Hewitt’s hometown that his family hosted players for.

“I’d go and catch bullpens at their games, and because I did that they’d let me come out and take groundballs before the games and hit BP with them,” Hewitt said. “So I was sitting there, catching guys that just got back from affiliate ball and a lot of former DI guys, and I sat in the bullpen and talked with them. That was a huge part of my development, just being in the cage with those guys and then sitting there all those nights. I went on the bus with them and caught all those pens, and those were guys with some plus-plus stuff, and I caught them from the time I was 13 to the time I left for college.”

Hewitt’s move behind the plate hasn’t been a full-time thing, especially with how injured the Cowboys have been throughout the season. Of OSU’s 53 games played entering their NCAA Regional in Arizona, Hewitt has started 28 at catcher, 18 at second base and two at shortstop.

Hewitt is hitting .275 this year, and he has been clutch when the Cowboys have runners on base, evident by his 44 RBIs. That’s second-best on the team behind only Christian Encarnacion-Strand. Hewitt has had nine games this season with multiple RBIs, including a ridiculous seven in OSU’s 28-0 stomping of Arkansas-Pine Bluff.

Starting his college career at Connors, Hewitt took an untraditional route to OSU’s senior class, but the Cowboys will need contributions from their middle infielder-turned-utility catcher if they want to advance their season past this weekend.

“Max is an incredible team player,” OSU coach Josh Holliday said last season. “He has been since Day 1 when he got here. An awesome teammate, an amazing student. He’s accepted his role each year.

“He’s a tough kid. He shows up at the field every day, he loves baseball. That guy cannot get enough of the game. Catching is usually a good position for guys that have that kind of motor.”