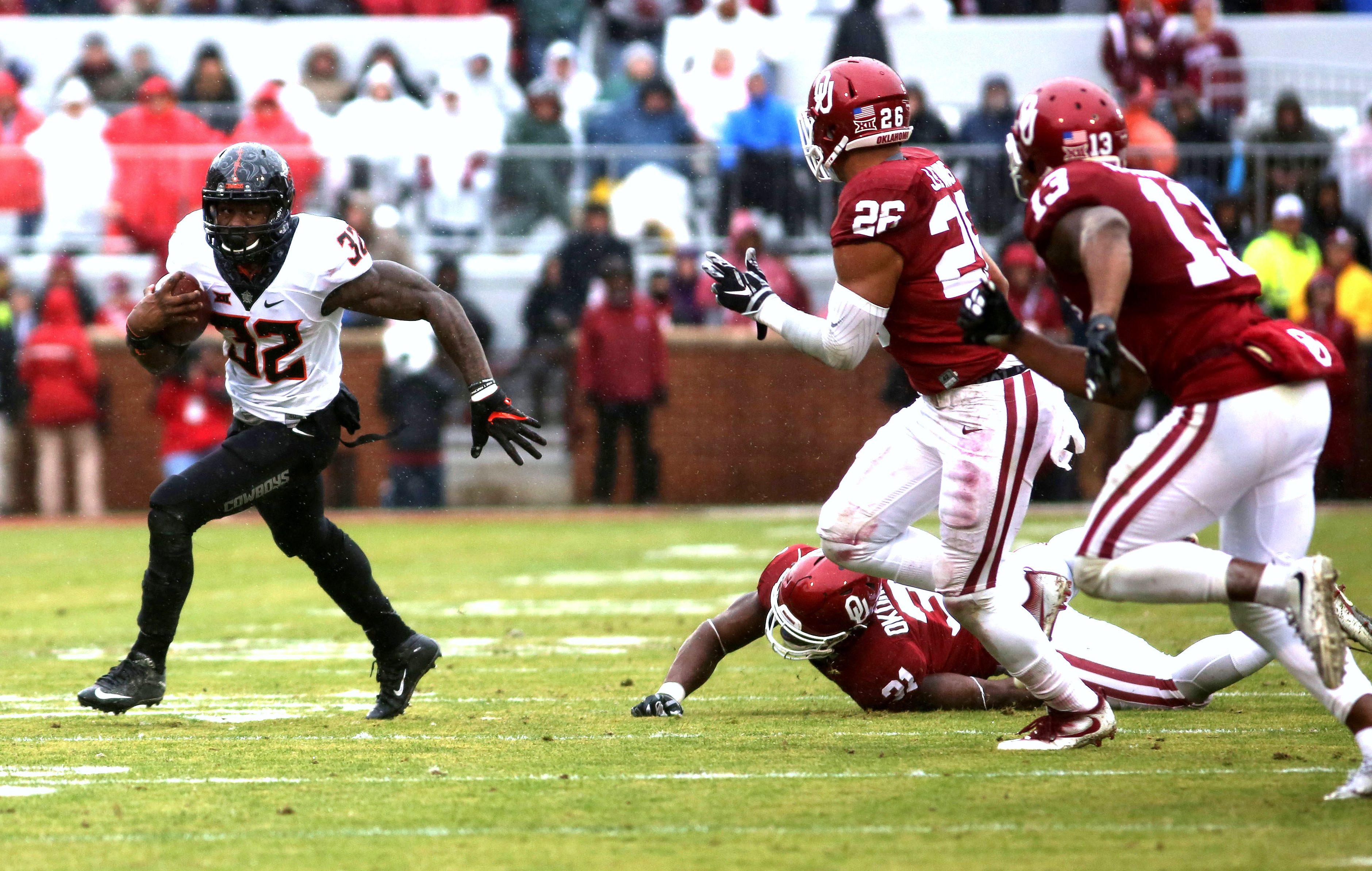 My 10 Thoughts are here. Let’s empty the notebook on a bummer of a day in Norman.

Here's @baker_mayfield6 big reveal of his undershirt. He was proud of it. Also neat moment w/ @LincolnRiley. pic.twitter.com/ophXKiFWbO

• On the pregame show, FOX cut video of players and coaches telling factoids people might not know about them. This is what Mike Gundy said. “I wrestled for 12 years. My brother coaches at OU. I’m a farmer.” /dead

• This picture kills me for some reason. • Is it just me or does Baker seem offended by everything? It’s clearly working for him, but that seems like a tiring way to live your life.

• OSU went with the 3-3-5 defense which seemed like a great decision right up until the point where Darius Curry was trying to cover Dede Westbrook.

• Jhajuan Seales had three catches and 80 yards on Saturday. I did not peg him to be OSU’s leading receiver.

In memory of Mike Winchester, thank you @SouthwestAir. pic.twitter.com/9TClRJZ9Mi

• Have mercy on this play. Poor Darius.

• Baker is such an impressive weapon because you can do so much with him in the red zone. He’s like Wallsh but with Rudolph’s arm. He’s like Johnny. I was terrified every time he gets the ball.

• You know how Sports Illustrated used to do those “welcome to the NBA” moments pieces? Desmond Mason was on one once and he said dunking on David Robinson was his welcome to the NBA moment because he welcomed himself to the NBA. Anyway, Calvin Bundage hitting Samaje Perine might have been Bundage’s welcome to college football moment.

Gundy jacket status: Tucked all the way in. ❤️ pic.twitter.com/6kSvWeKwTZ

• OU’s average starting field possession was its own 22. You did everything right, on special teams!

• I really love Mason Rudolph running. He Carsoned a dude on his TD run. He now has three rushing TDs in his last four games.

• At one point I wrote, “Is Chris Carson better than Perine?” We have an answer: No. Perine had 37 carries for 239 yards. He is a freak. So is Carson. But not like Perine. This was nice though.

• Mixon didn’t look right for most of the game. Am I making that up, or was he … off? The 79-yard TD looked fine, though.

• How does Perine out-run Sterns? He did so to open the second half, and I could not believe what I was seeing. Sterns eventually caught him, but how is it physically possible for a man that big to be faster than Sterns?

• I thought the offenses might flip in the second half. OSU air it out, OU feed Perine. Only one of those happened.

• OU did a great job coming back to the ball on broken plays. Baker would be the greatest flag football player in history.

Most rushing yards in Bedlam for #okstate …

• Mixon got hurt. Okoronkwo got hurt. Perine got hurt. Dede got hurt. Baker was the only one who didn’t get hurt. And he killed you.

• How bad would that Orlando Brown penalty at beginning of 4th have been if OU had gone on to lose? OU was knocking on the door with a dagger in its hand and he picked up the flag, Perine fumbled, and it felt like a repeat of 2014 was on deck.

Here’s how similar the situation was in 2014.

• Barry J. quietly had his best game of the season. Four returns for 138 yards, and he nearly broke two of them. His 138 all-purpose yards were a personal best and his 56-yard kickoff return was a career long.

• More of this please.

The man with the mullet is not pleased. pic.twitter.com/3LSejg0Xo4

• I thought the CFB Playoff committee was going to award OU the win today no matter what happened because, you know, injuries and stuff.

• Where in the world was the first down line on this play? The yellow line says beyond the 41. The orange marker says at the 41. And how did it get overturned? Friendly reminder that this game is beamed from Ohio, into space & to your living room, but we measure down and distance with linked metal.

• Just after that first down overturn situation in the fourth quarter, Gundy needed a timeout to know to give it to his 250-lb. RB on 4th and a centimeter.

• I hate it all once again.

• A fitting way to the end night right here.

: Since you mentioned it. Begrudgingly made this. pic.twitter.com/QbjrOVDiVD

• I genuinely meant this.

Sincere congrats to OU. Got a bunch of Sooners that are great friends. Injured OU team showed out with a title on the line and Pokes didn't.