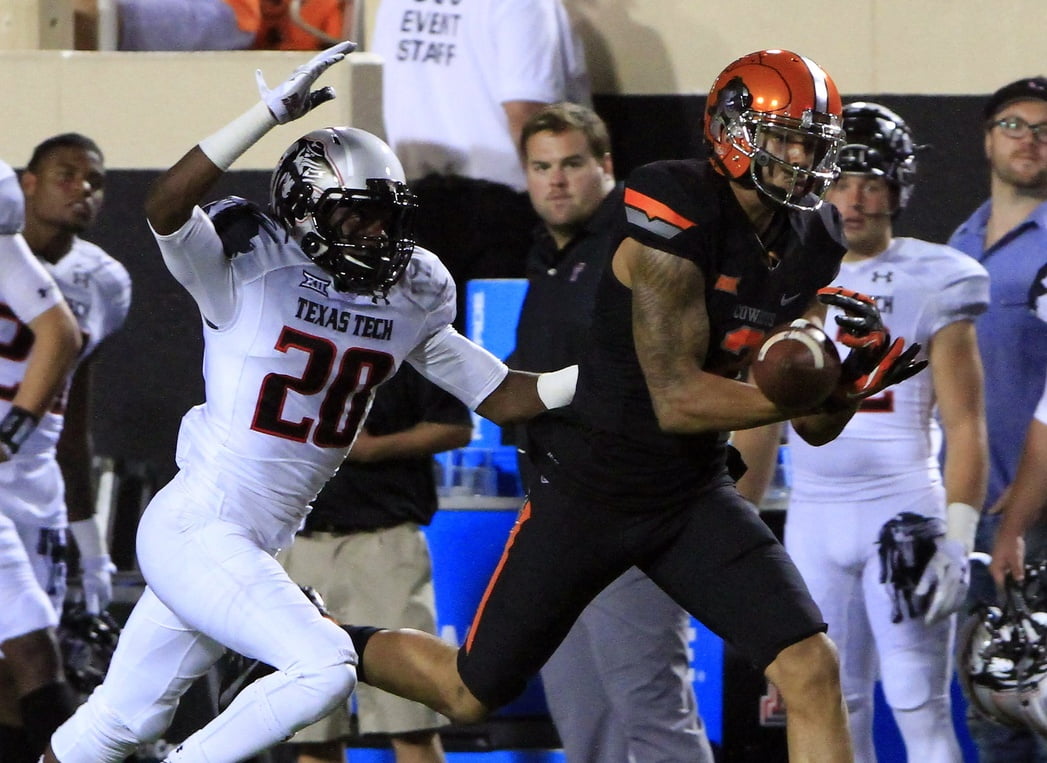 I posted my 10 Thoughts here and this is everything I had leftover from that.

• Speaking of “spinning” things. Can we curb that ridiculous phrase when it comes to quarterbacks? You’re throwing an oblong object through the air, Rumpelstiltskin isn’t involved!

• Marcell Ateman on the offense: “We had some drives we didn’t do too well on, but we’re always looking for ways to get better. We put up a bunch of points, but that’s not good enough for us. The next game, we might want to have 65 points.”

• Davis Webb has a little Matt Saracen in him. Also, why was he walking like Pistol Pete shot him in the chest? Did a bum shoulder create a limp in his step?

• Truth from Gundy here: “I mentioned this a couple of weeks ago, but every game is going to be like this for us with so many young players.”

• I didn’t mention it in the 10 Thoughts but James Washington was obviously tremendous. He’s insanely good for a freshman.

• I’m not sure how to compare Jakeem Grant and Tyreek. Is Jakeem a middle class man’s Tyreek or is Tyreek secretly a poorer version of Jakeem? I think Tyreek is more talented but Tech certainly does a better job of putting Jakeem in positions to strut his stuff.

• Speaking of Tyreek…he made a run through the hole about which David Pollack said “those jump cuts are something serious.”

• Kliff making me laugh: “No. I’ve never seen a team shoot itself in the foot as many times as we did tonight. It was embarrassing football, honestly, that’s the only way to put it.”

• Gundy on the youngsters: “We had a couple of guys get knicked up a little bit so we were playing with a lot of freshmen out there. One time I counted five true freshmen, and that made me a little nervous. They went out and competed and made some plays.”

• I greatly disliked the decision to let Grogan kick a 42-yarder in the fourth quarter. Both because Tech was scoring like mad at the time and for reasons outlined here.

• Gundy on James Washington: “From the day he stepped on this campus and we threw the ball down the field, he elevated over everybody and took it away from them. He did it over and over and over in practice.”

• Kevin Peterson officially gets the default Uni Heisman mantle from Justin Gilbert. That is, if nobody tops him in a given game, Peterson automatically snags the nod.

• Gundy on Daxx: “For the most part, he understood exactly what we wanted to do. He did much better in our run-pass checks. In fact, I don’t remember him making a mistake, run-pass check-wise.”

• I realized on Thursday when I was sitting with Dave that my favorite “fans including me don’t really have any clue” moment in every game is when a flag comes in and said fan leans over to his buddy and wife and says “that’s holding” pretty much 100 percent of the time.

• I think Daxx might be underrated as a decision maker. For somebody who launches bombs like him he makes a surprising number of conservative decisions. That’s why the pick at the end of the half was so shocking.

• Yurcich on the Freek TD: “I held my breath the whole time that ball was in the air. Tyreek has an uncanny knack to step on the gas pedal and chase it down. I think (Daxx Garman) knows that so he leaves it out there for him.”

• I love Kliff. I don’t care what that says about me. I really don’t.

• Good stuff from Spencer here: “We want that 90th play to be the same as their first play with their effort and their eyes, discipline and toughness. I want to look at that on film and see if we were doing that at the end.”

• The best of social media…

This guy is the MVP of our childbirth class pic.twitter.com/fXisjKnrQa

It's like playing NFL Blitz for N64. Da Bomb or Hail Mary every time. Just like novacaine, give it time it always works.

It's hard being a fan of a really good program….. It's not close on the score board and I'm annoyed

Gundy thinks Jeter's career was ok and he could have performed better for the offense.

two TEs are the real unicorn

The difference in effectiveness between Walsh and Garman isn't much, but entertainment value is off the charts with Garman.