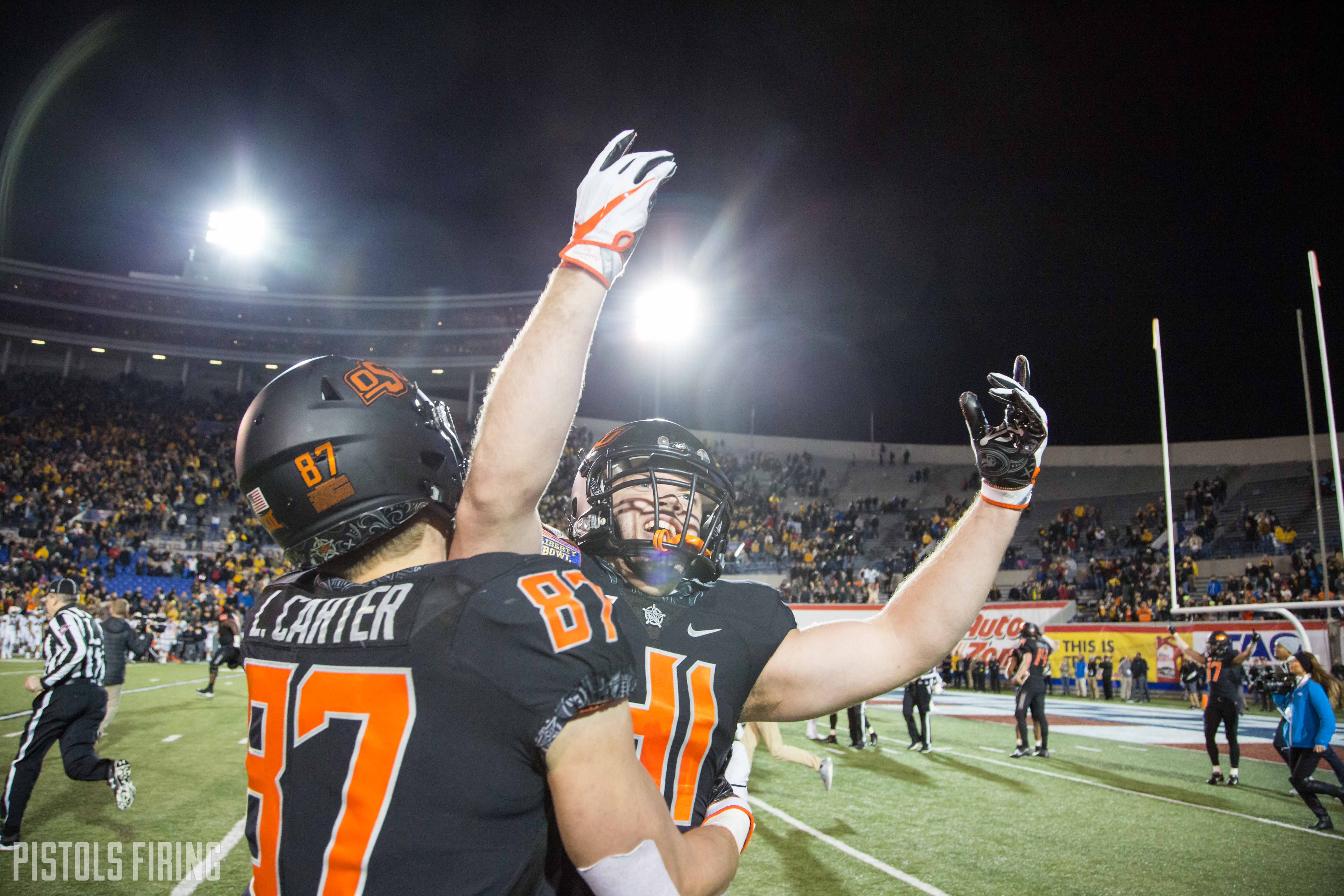 MEMPHIS, Tenn. — Mike Gundy was joined at the dais by several members of his Oklahoma State team, and they all fielded questions for about 20 minutes on Monday evening at the Liberty Bowl. Let’s dive into what was asked, what they said and what it means for the end of 2018 and beginning of 2019.

Note: When anyone other than Gundy talked, I noted it. Otherwise, you can assume it’s Gundy.

• Gundy was asked to introduce his players, and I was legit surprised that he knew all of their names and didn’t go straight numbers at some point.

• “This was a very, very traditional bowl, somewhat like back in the day when I played 100 years ago. We had a great week.”

• Said Coach Odom and Missouri are “first class.” Team is really good and they compete. OSU had to play physical to win.

• “These guys were willing to pay the price for a month and come together as a group. Coaches made adjustments.”

• Didn’t know who would have gone in if another player in the secondary had gone down.

• First question was about targeting (?) — Gundy said the correct calls were made based on the rule. OSU was “wired up” to play on Monday. Rule needs to stay intact to ensure safety. “Have to do a better job of coaching them and drilling them to keep the hits below the chest.”

• Corn said the OL was great on Monday and that Tyron “stepped up big.”

• Gundy said Corn missed a couple throws but “so did their guy.” Got a “biological clock.” ?

• OSU learned 10 minutes before they went on the field that they wouldn’t have headsets, no communication with the box. Mizzou’s worked but OSU worked out a “gentlemen’s agreement” that they wouldn’t use them either. Each team put somebody up top with a telephone. “I thought it went pretty smooth for us.”

• Yurcich did a nice job adjusting (because he’s not usually on the ground), and Knowles was working without information from the booth.

• Corn said as long as they win, that’s all that matters. Doesn’t care about numbers and records.

• Gundy won’t elaborate on the first question he gets asked about the report that Mike Yurcich is leaving Oklahoma State. “At some point he’ll have to make a decision about his career.” Nobody has told Gundy anything concrete yet.

• Justin Phillips said the fourth down tackle on Drew Lock to end the game was a great play by Kolby Peel. “He came up with a big stop for us.”

• Gundy said Peel had to be ready for a play action pass but also run Lock down. “He turned the jets on.”

• Tyron credited offensive line and Corn. Said the safety cheated toward “two,” and he knows when his number is called he’s ready to make big plays.

• Tyron revealed that Gundy did something (not sure what) to fire the team up before the game. Nobody would elaborate. Gundy said it would make his mom “tip over.”

• Here’s what was said about Yurcich the second time it was asked.

• Gundy said Mizzou has a really, really good offense and that Lock made some sick throws. Being in previous shootouts helped OSU.

• If Hockett had to do the fake punt again he’d stick his foot in the ground and go vertical. Do what?!

• OSU had practiced the fake punt a lot and “it was there so we wanted to use it.” Said Mike Scott got both blocks on the kicks. “Very well could have been the biggest play of the game.”

• Justin Phillips said coaches and staff did a great job taking care of their bodies and prepping them for the bowl week. Also noted that, “You try to step up for the conference you’re with.”

• Enoch Smith said the break between 12th game and bowl game allows them to rest as much mentally as physically. Thinks football at this level is “90 percent mental.”

• Tyron: “Taylor is very poised, you never see him get rattled. He always keeps his cool. He’s a leader by example. It’s great to have leaders on your team you can look up to and learn things from and pass it down.” Noted the culture that Gundy always talks about.

• Chuba: “Everyone that views us at Oklahoma State knows that I love Corn. Obviously he’s got some hate and stuff, but I always support him. He’s a great guy on and off the field. I wish I could back him up and say some stuff back to the people who were hating on him.”

• Chuba declined an invitation to actually say some stuff.

• Enoch said it was important to not focus on what the offense did. “We knew that one play can be the difference in the game. We went out there and stayed focused. Some of us were tired, but we had to put that behind us. Coach Gundy preaches no fear, no frustration, no fatigue.” Coach Knowles talks about the defense having “a singular focus.”

• Tyron: “You always want to finish the season on a good note with a win. Establish that culture. Establish a winning culture. You want to leave with a win and build off it.”

• Gundy told one reporter that he should watch more Big 12 games and consider some heart medication to go along with his new viewing habits.

• The offensive coordinators in the Big 12 are “fearless” when it comes to throwing the deep ball. “I’m going to guess if you started 8-10 years ago in the Liberty Bowl, you may have had 3-4 deep balls thrown in the entire game.” Probably had that in the first six minutes, he added.