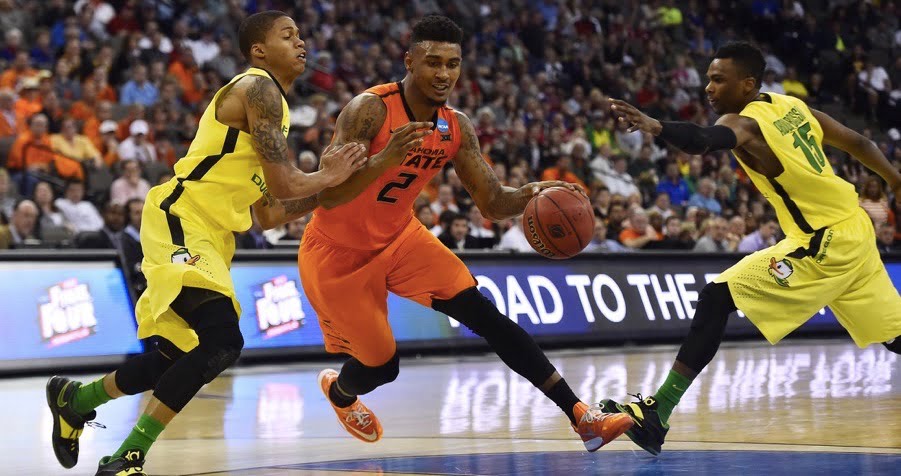 These are the names of the teams that have more NCAA tournament wins than Oklahoma State since Travis Ford took over in 2008-09 after Oregon beat OSU 79-73 on Friday night in Omaha, Neb.

OSU has one win in the last decade of NCAA tournaments (yes, 10 years and one win).

Even that win in 2009 in Ford’s first season came on a miraculous drive at the end by Byron Eaton. Eaton is long gone these days but the frustration of Ford remains.

OSU got out to an 8-point lead early in the first half. It was shockingly wonderful to watch. The game was flowing at a great pace and the officials were letting everything go.

The Cowboys were getting to the rim and running and hitting 3s and playing amazing defense and getting to the line and Oregon was clanking long 2s and you knew somewhere deep down in the Travis Ford-stamped orange heart of yours that it just would not last.

OSU handled the end of the first half about how I handled watching the birth of my first child. First, the Pokes let Oregon go on a 13-3 run to take a 41-39 lead.

Then Ford inexplicably ordered Christien Sager to foul Oregon’s best player 60 feet from the bucket with two seconds left with Oregon already in the bonus.

Actually, I take that back…it was explicable. It was just preposterous.

Here’s what happened: Travis Ford didn’t know how many fouls they had committed. No, really, that’s exactly what happened. Here’s Jenni Carlson (who was there) with an explanation of the proceedings:

That OSU foul at the end was on Travis Ford. He looked at the board and saw five fouls — but that was on Oregon's side. Told Sager to foul.

After Sager fouled and refs signaled 1-and-1, Travis pointed to the board, trying to argue it said five. Well, it did. For Oregon.

That set the tone for the rest of the game.

OSU rallied and actually took the lead in the middle of the second half. Its main antagonist in the proceedings (Anthony Hickey) ran out of gas at the end, however.

Oregon led for the final 9:22 and this was a pretty decent indication of how the ending went down:

Joseph Young was devastating for the Ducks, making 8/15 FGs and pouring in 27 points, four rebounds and four assists.

Hickey shut him down a little bit in the second half and offered up 17 points, four boards, two assists and five steals of his own but it wasn’t enough.

The Cowboys went away from Le’Bryan Nash (18 points and seven rebounds) until the end of the second half and couldn’t get the stops they needed to late in the game.

Tavarius Shine played some terrific ball, hitting 4/7 from 3-point range and tossing in four boards of his own and Mike Cobbins poured in a surprising amount of offense with nine points and seven rebounds.

Friday marked just the third time in 11 games where OSU has made nine or more 3-pointers and still lost. They were 10/29 from deep.

The whole thing played out like a movie I’ve seen numerous times. An OSU team that was only successful this season because of its defense couldn’t get any stops and wore itself out trying to get buckets on the offensive end.

It’s mistakes like this that have marred the Ford era (anybody want to talk about not fouling at Ames at the end of the game last season?) and put the head ball coach back on the hot seat.[1. This will be discussed at length next week.]

(It’s a frustrating thing to be within striking distance with four minutes left knowing how the end is going to go, only wondering what the final margin will be)

There’s certainly a part of me that feels bad for Ford. He works his tail off and this team probably overachieved even though it lost seven of its last eight games of the season.

The fact remains, however, that Ford pointed out before the NCAA tournament began that we put too much emphasis on NCAA tournament wins and then proceeded to insult all of us “normal fans” in the process.

The problem with that, as I pointed out, is that Travis Ford and his 1-5 NCAA tournament record at Oklahoma State have nothing to fall back on.

He hasn’t won in the Big 12, he hasn’t beaten OU, he hasn’t done much of anything other than rack up No. 8 and No. 9 seeds for the last seven years.

Joe Young lost his dang mind tonight, yes, but it always seems to be something with Ford and his teams. It’s the Le’Bryan Nash career in a nutshell — so seemingly close to being spectacular but something always goes wrong at the end.

Ford can ride these bubble teams into an early retirement if he wants (he’s certainly made enough money), but his body of work, seven years in the making now, is just not acceptable at Oklahoma State.

The worst part for Ford (and OSU basketball in general)?

Nobody expected anything different tonight.

• Tulsa World beat writer Mark Cooper pointed this out on Twitter, but where in the world was Nash at the beginning of the second half? He didn’t shoot from the field from 1:55 in the first half to 14:41 in the second.

• This hasn’t really been the finest month for higher education in the state of Oklahoma. OU did their thing and now we have like 33 people on our bench who can’t count to seven.

• It got lost in all the “fire Ford” madness but Jeff Newberry was a no-show. Tavarius Shine did an admirable job of filling in but still…

• Joe Young had 23 of his points in an 8-minute stretch from the end of the first half into the second.

• Speaking of Young, that dude is a bad man. I know he was Pac-12 Player of the Year but I was not prepared for what he did to us at the end of the first half.

• The nice silver lining in all of this is that we don’t have to get smoked by Wisconsin on Sunday. I’m not sure how many Frank the Tank 3-balls I could handle in Cobbins’ face.

• I wish I could say “Oklahoma State” like Charles Barkley does.

• For all the work Ford puts in to this squad just to get a tiny advantage and then he goes and gift-wraps two points to an opponent like he did at the end of the first half. It’s either the worst luck in the world or he just focuses on the wrong things.

• I feel like I’ve been really even-handed with Ford this season but I was pretty frustrated after tonight’s game. Just about how everything has gone down in the last week or so (we’ll talk more about this next week, though).

• My favorite commercial was the BMW commercial where the grandma says “your grandfather loved it when I wore leather” and the young couple sitting in the front tries to not throw up. A legit LOL from me.

• I wish Joe Burton could ball as well as he can dance.

• My favorite quote of the night came courtesy of Chris Webber in the first half after Nash dunked: “Thank you, Nash. This is what I came to see — some grown-man ball in the paint”

• I was reading the other day about how Iowa State thinks like a NBA team when it comes various intricacies of the game. Do you think our players (or coaches) ever think about stuff like that? We just never seem very…intelligent about what we’re trying to do.

• I wonder if Ford can count the number of NCAA tournament wins he has.

• Forte’s fall from grace was the most shocking part about the second part of the season. He played a little better tonight with 12 points and three assists while running around in a leg sleeve (was that a hint about something?) but still.

• Nash had seven turnovers tonight. That tied (!) a career high. He’s done it three other times.

• Mrs. Pistols sat down with eight minutes left in the second half. After about three minutes of watching, she posited, “do we run plays?”

• Our transition defense wouldn’t have gone over well on the second-best court on a random Thursday at the Colvin.

• The Christian Laettner commercial where he was in a hammock made of all the nets he clipped, yeah, that was perfect Laettner.

• I’ll say this, the game was actually fun to watch. That’s more than you can say about most of our outings this season. We finally rid ourselves of the tyranny of Big 12 officials and got up and down a little bit.

• The number of wristbands I would wear if I played at Oregon is unbelievable.

• I’m sorry I’m not sorry about loving the uniform matchup. The duck on Oregon’s shorts is perfect and I’m a color-on-color homer.

At what point is Holder held accountable? 14th highest paid coach in the country and 1 Tourny win to show for it #okstate #LoyalAndTrue

• Quite the duo here. Season 3 of True Detective?

That is random and awesome. RT @mark_cooperjr: Weeden and Darrell Williams sitting next to each other at the game. pic.twitter.com/O3YgV4FmRK

• Honestly, Ford couldn’t win tonight. If we win, it’s “where was this team the second half of the year?” If we lose it’s…well…I presume you’ve looked at Twitter. Ford was ultimately hurt by his early-season success but this goes back to the Bad NBA GM Principle.

If you’re always kicking the can down the road like Sam Hinkie from the 76ers (“we’re so young!”) then you can’t ever be fired because success is always right around the corner.

Next game: September 5 vs. Central Michigan