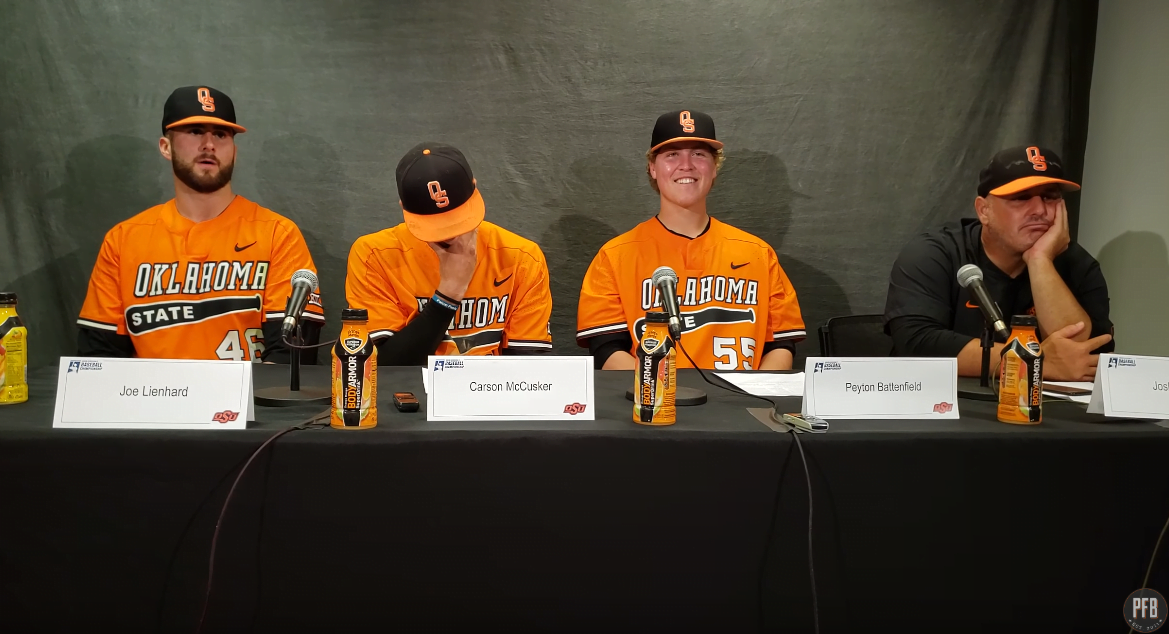 The Cowboys punched their ticket to the Super Regional in Lubbock with one final team standing in their way to Omaha. After the game, head coach Josh Holliday, Carson McCusker, Joe Lienhard and Peyton Battenfield met with the media.

Here’s some of what jumped out to me, starting with Holliday on his bats that finally came through after a rough start.

• It was grind on offense. Holliday says he has to do a better job as a coach helping team relax and thinking about at bats correctly. Alix Garcia started things off (with his fifth-inning home run to know it at 1-1).

• On the big two-run RBI by Carson McCusker, and the steps that led to it.

1) “Trevor [Boone] calmed down enough to draw a walk.” Holliday talked about all the excitement (and pressure) that surrounded that big homer on Saturday night and how it’s natural to want to try to recreate that. But Boone “took the walk there which proved to be huge.”

2) “A head’s-up base running play by Bryce Carter” (after a fielding error moved Carter to second and Boone to third. “That was a big base that Bryce took…”

3) “…and then Carson delivers. He delivers the first big clutch multiple-RBI hit that we’ve had in a couple of games other than the rally we had the other night.”

• “A number of kids at that time, they slowed their heartbeat down enough to deliver and I’m very proud of them.”

• “Thought Coach Walton did an amazing job of putting the tournament together from a pitching standpoint, and then I thought the kids executed at a very high level.”

• The greatest gift of winning the regional and extending their season is just that, “We get a chance to keep doing this, together, and that means a whole lot this time of year, especially when relationships and bonds and investment is as strong as it is with this group of kids.”

• “I thought Joe [Lienhard] left it all on the field, man. Whether it was the pitches he made or the way he left his feet (when he sacrificed his body for the out shown below). He pitched from his heart, he pitched for Oklahoma State. That’s a great place to come from when you’re pitching in a big situation.”

• “Carson [McCusker] is just a grinder. He’s just got a steadiness and consistency about him that’s allowed him to really blossom into a fine player.”

• What else can you say about Peyton Battenfield? “He took the stopper role for us this year and he’s embraced it. He’s been marvelous at it.” As far as relief pitchers at OSU, “Peyton has performed as good as anybody we’ve had.”

• Carson McCusker on his two-RBI double that made the difference:

At first he forgot who it was that represented the first of his two runs batted in “Was it Navi?” He was corrected by his head coach who just got finished talking about Boone’s walk. But we’ll give him the player of the game the benefit of the doubt since it’s his first regional win.

Back to the play.

“I knew that guy was going to pitch to me because Al [ix Garcia] had a great swing earlier that day and a home run. I just went up there, told myself not to do too much and came through.”

• McCusker was charged with ranking which the best of his three catches and he diverted the attention to his starter sitting to his right and this lay out for the out.

• McCusker went with his first-inning grab because it got the out and stranded a runner on third. Holliday said he couldn’t see the play from the dugout. “When he disappeared  I just looked to the crowd to see how they reacted. When people stood up I knew he caught it.”

• He also talked about his diving catch in the sixth stating that he “got a bad read on it” which necessitated the highlight play.

Holliday said there is a white tarp in the second deck that is in the sight line and in which balls can get lost. Says it affected them in this tournament and in the Big 12 tourney. Also said before the conference tournament, McCusker “worked his tail off” preparing for that possibility. “Compliments to him for making that adjustment.

• Holliday gave kudos to his team for “gutting through” a lot of baseball. Says he was a little concerned that their long run in the conference tournament might have “zapped a tiny bit of the starch in our legs” (a phrase I think applies to Marshall Scott after his 25th late-night trip from OKC to Stillwater over the last month. Kudos to him too.)

• Holliday complimented Connecticut for losing Game 1 of the regional and then winning three in a row to push OSU to and on a Monday night game.

• Joe Lienhard talked about the challenge of taking on a lineup of tough outs in UConn, especially after his rough outing against TCU in the Big 12 tournament. Credited his defense, says he trusted his stuff and gave a lot of credit to prepping with Rob Walton.

• Holliday talked about Alix Garcia and how he came right in and endeared himself to his teammates quickly last fall. Is a valuable weapon at the bottom of the lineup. One of the best RBI guys they’ve had there.

• Looking toward Lubbock, Holliday says this is a different team than the one that got swept 0-3 in the end of April, and credits it with where they are today.

“Since then we’ve played two games in Stillwater.” Rattled off the Bedlam series, the sweep in Corvallis over Oregon State, the Big 12 Tournament and this regional. “We’ve grown leaps and bounds and we’ve had moments and experiences that have helped us grow from that. That series helped us. It forced us to either go all-in or just float off like all of the rest of the teams that don’t really, really have that investment.”