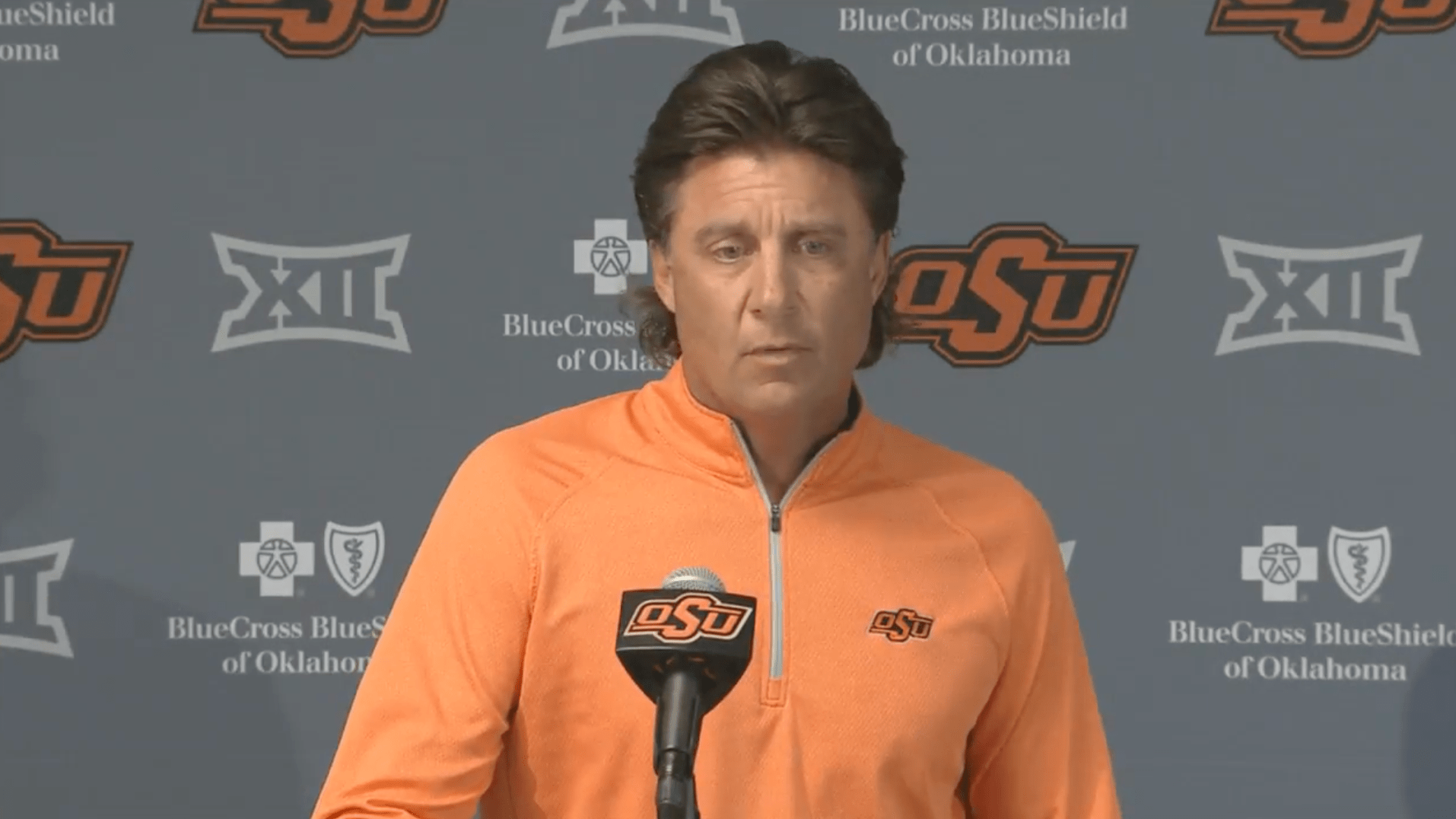 Mike Gundy talked Taylor Cornelius, why the freshmen safeties are hurting Oklahoma State and what’s going to happen with Spencer Sanders on Monday.

• “I was pretty ackrut” in the postgame. Said they blocked OK in the running game but didn’t protect. TC played pretty well but was running for his life. Sounds a lot like what he said on Saturday.

• Said they were better on special teams other than Sinor’s fumble and a couple of punts.

• Defensively, OSU has to be better at not giving up big plays. Young guys getting their eyes caught in the backfield. OSU didn’t practice a lot against read zone (zone read?)

• Most important thing is trying to correct their own mistakes before figuring out Kansas State. Said they’re better than people think. Three losses against top 25 teams.

• On Taylor: “He played good. I’ve come in here every week and giving you my honest opinion … He’s gotten better every game.” Noted sacks and TFLs against Iowa State. Natural for him to not play great because “he was on the run the entire game.”

• Wanted TC to carry the ball a little bit more.

• “Would (Taylor) like to have three throws back? Sure.”

• Gundy would have lost his money if he’d bet on where the OSU offensive line would be at compared to where they are. If he was a “gamblin’ man,” of course.

• On what’s changed with his team since the Boise game: Need to cover the deep ball better and block better. Kinda ducked the question but he’s not wrong.

• Made a point that OSU scored 42 on a good defense and didn’t even play well on offense.

• Doesn’t want to be so “multiple” on defense. Wants to tighten it down. Sounds like he thinks Knowles is trying to do too much.

• “We’re young at the safety position, and that’s a difficult position to be young at.” Doesn’t surprise him, but wish they were more mature at that position so Thabo, Peel and Bernard aren’t playing so much.

• Said Malcolm Rodriguez is “playing with a lot of pain.” Thinks he’ll get considerably better over the next few days.

• Said most of the seven sacks are on the offensive line. Didn’t blame Corndaddy.

• He went into the audience and demonstrated what OSU is doing wrong blocking-wise by covering up Mark Cooper of the Tulsa World.

• “I think we’re pretty good on what we do. I don’t know that we all need to hit the panic button.”

• The most difficult part of defending in the Big 12 is guys’ “eyes getting violated.”

• Said they have some guys who need to go through spring ball. Trying to come up with solutions they can implement as quickly as possible.

• Mentioned a play on Saturday that was a TD that would have been an interception with Tre Flowers because a freshman was out of position in a simple coverage.

• “If they were all first round picks and 4.0 students they wouldn’t need coaches.”

• Said they don’t have time to feel sorry for themselves and that he was crootin until 10:30 on Saturday night and from 10-12 on Sunday morning.

• Said Chuba is worth the risk for not fair catching everything. Said he’s going to break one soon after he gets a crease.

• OSU’s defense is going to get a big dose of what they saw last Saturday from KSU this week.

• OSU’s been in a lot of close games with teams like Kansas State because the 30-35 players that play on both teams are pretty close from a talent perspective. ?

• Joe Bob “knows enough to be a coordinator.” Has a Kansas State tattoo on his shoulder. I … did not know that.

• Corndog has played “about like I thought he would.” He’s made some mistakes in games but not really any more than Mason made.

• Said Taylor runs like Zac Robinson ?. Throws it really well. Said he’s unusual. “If he had another year, I think we’d really be bragging on him this time next year. Look at the history of the quarterbacks in this league, the improvement they made from Year 1 to Year 2.”

• Tylan was at the recruiting dinner with him. “A great ambassador.” Gundy didn’t know what fork to use at dinner. Too many courses.

• Need to get J.D. and Chuba involved more. They’re good players but Justice is a great player. Compared it to taking LeBron out.

• Brought it up again that people on the outside don’t bring negative plays up if you win. “That’s the nature of the beast.”

• “Mike (Stoops) is a friend from a distance.” I laughed. “Cale and I don’t talk about personnel.”

• “I’m not a big fan of playing freshman quarterbacks because I think they’re prone to injury. That scares me. Maybe I’m a little soft in that area.”

• The goal is to redshirt Spencer.