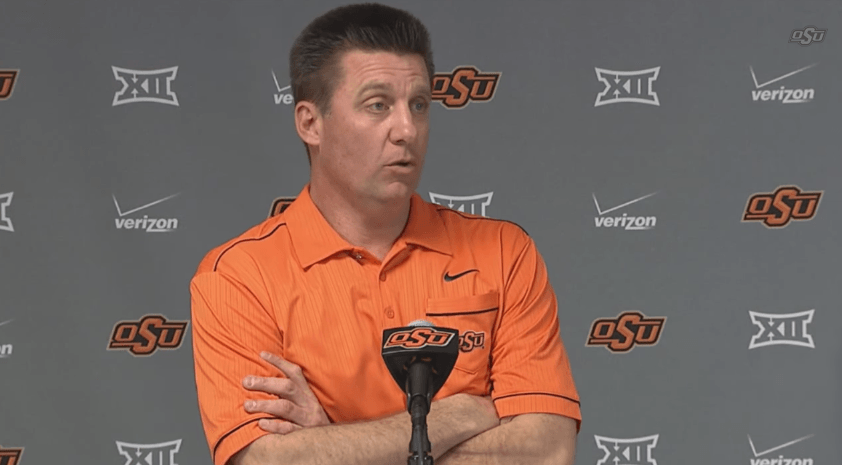 Mike Gundy and new assistant coaches addressed the media on Monday as spring football got underway in Stillwater. We covered the assistants here. Now, let’s take a look at what the head ball coach had to say.

His portion of the press conference starts at 42:40 and my notes are below.

• “We’re very excited about Spring Ball and the new coaches. Lots of new guys. Gavin just handed me a roster so I can remember who they are.” So Gundy. Back at it.

• Spoke about Daxx right off: “Know he’s going to transfer, just don’t know where. I just want to thank him for his great effort for Oklahoma State football.”

• On Mason and what is he looking for in the spring? “Continued leadership. He’s got a lot to learn. Physically he’s at about 235-240 (lbs). His temperament, his attitude is really good.”

• What’s the key for him in Spring Ball? “Understanding our offense and being able to delegate the ball to people who make plays.”

• “Brandon Weeden and Zac Robinson did a great job of saying, ‘OK, we’re going to run the football.’ Want to see that from him.”

• Gundy said these words: “Mason is our starter”!!

• Addressing the OL: “In all positions other than OL, I’m real comfortable with our football team. We have a bunch of guys coming back.”

• “Middle part of last season…we just weren’t very good. There’s a frustration level that builds for everybody. And it starts with me.”

• “At this time next year we should be back to where we were a few years ago.” Wait, what?! Is that good…or posturing?

• Is a medical redshirt possible? “You never know until their eligibility is completed. That’ll keep you guys from asking that from now on. That’d be a good question for the NCAA compliance. Put your question in now, you might find out in June…of 2016.”

• General QB situation: “We have Kolar and Todd Mays, who will get some of the 3rd team reps on offense. He’ll be doing some different things on offense…He’ll start out at RB and at times he’ll play QB.”

• What about Carson and Carr? “The times we’ve been really good we’ve had multiple backs make plays for us. We need a guy who can carry it 2o times and a couple others who can carry it 10 and 10.”

• On TEs: “With Seaton, we’re going to limit his reps. He’s a guy who’s been here. The young guys are getting a lot of work. But, Jarwin is really doing well. He’ll play as an attached TE, FB and as an unattached WR.”

Not sure what all that means, but it sounds cool.

• In regard to the selection process for the new staff members, Coach had much to say, but I’ll summarize by saying he gave big-time props to Holder’s role in all of it. “I couldn’t have done it without Coach Holder.”

• As far as offering the jobs: “First of all, all of us in this profession are overpaid. Our staff on hand has done a great job.”

• The number of applicants?…“A lot! That’s why I changed my cell number.”

• On bringing in Bill Clay and Darrell Wyatt (again): “Both Bill and Darrell are football junkies. That’s what we look for.”

• Any other position switches we need to know about? “Not that I know of. The depth chart as we have it, this roster, is pretty AKKRIT”! Football is on the horizon…

• Coach closed out with this, somewhat random, very Gundy-esque beauty…he was asked about the opener being played on a Thursday: “We’re still communicating with their camp. They’re saying, ‘maybe’.

Coach and I have talked about it, then, quite honestly, we got off on hiring coaches and then he went to some convention. I went to Vegas and since then we hadn’t…I lost so much money I hadn’t got back on track yet.”