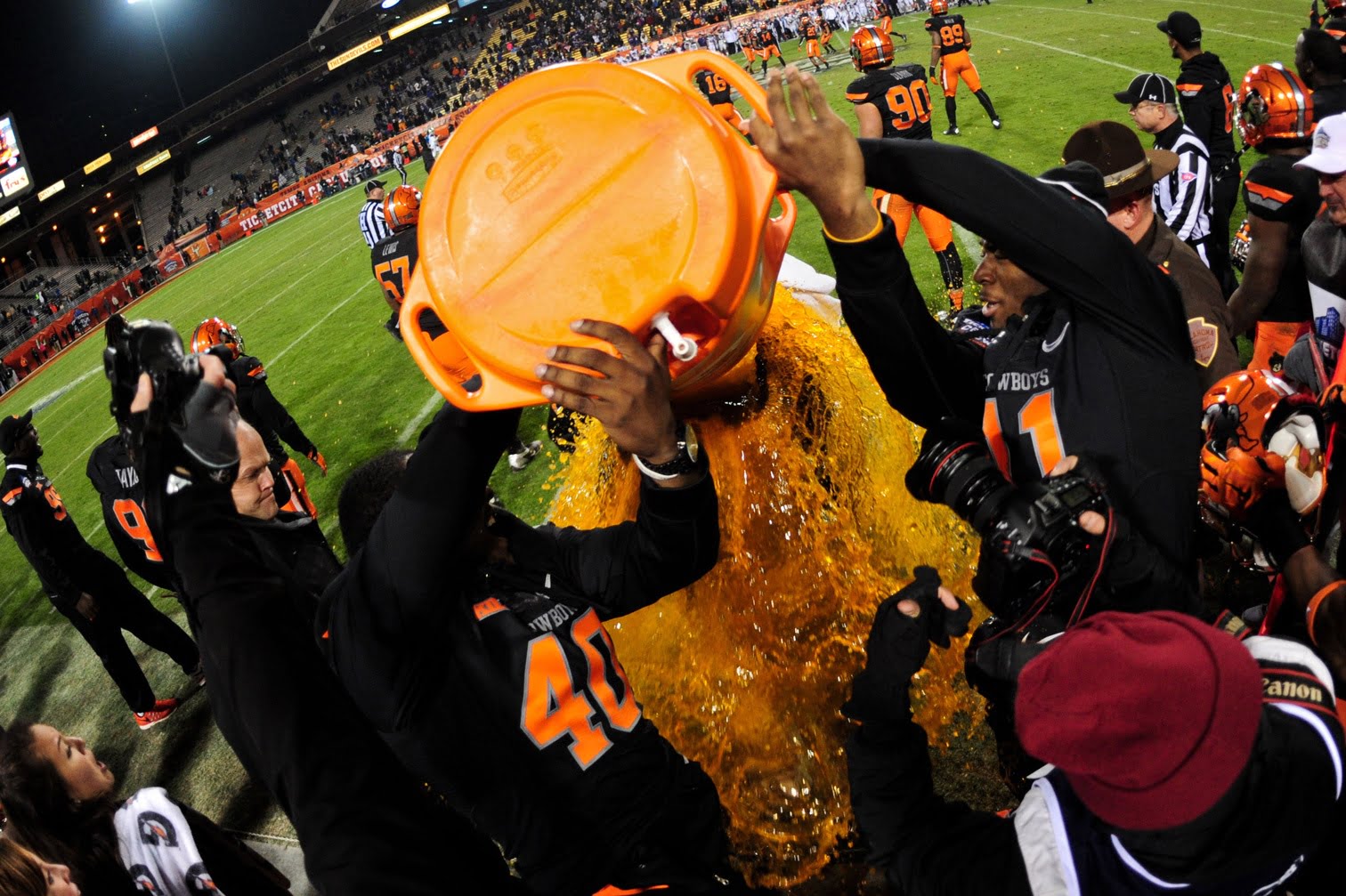 A great ending to a wacky season for the Pokes. (USATSI)

I posted the 10 Thought here but of course I have many more than that. Also, I broke most of the social media stuff (Twitter and Vines into their own post here) but here are all my leftover thoughts and notes on what was a wildly entertaining Cactus Bowl.

• Oh hey I even got to write a little thing about James Castleman for CBS.

• The OSU marching band formed the shape of Oklahoma in the pregame — I presume this was done as a chalk outline honor of OU’s death in the Russell Athletic Bowl.

• Why are OSU’s gloves such a different color from the pants and helmet? I love the gloves themselves but they look awkward compared to everything else.

• The announcers couldn’t not call Jaydon Mickens “Jay Don,” could they? Speaking of ol’ Jay Don, he’s quite a ballplayer. OSU isn’t short on speedy wideouts but he would have had a spot, no doubt.

• The only two Big 12 teams to end their seasons with two straight wins? OSU and TCU.

• You don’t have to look very far to find an overhyped January bowl game win negatively affecting a team’s next season, do you? I’m trying to temper expectations but the difference is that Rudolph is way more proven than Trevor Knight ever was.

• Speaking of the Big 12’s elite teams…Oklahoma State finished with a better record than Texas this season. How about that.

Crazy to think Oklahoma State is 30 minutes away from finishing with a better record than Texas.

• There were some pretty soft pass interference calls both ways in this game. I can’t stand soft perimeter fouls in college basketball and soft PI calls in college football. Nothing worse.

• We ran a LOT of draws in the second half.

• I hate the fade so much. Here’s your fade flow chart:

• Do you think Cyler Miles was throwing with his non-dominant hand or is that just how he does things? He and P4tton should have a throw-off to see who could throw it 45 yards first.

• Josh Furman is insanse off the edge. Like, “maybe we should think about signing him up for the Jamacian national 4×100 team” insane.

• OSU really played without inhibition in the first half, it was a delight to watch.

• This is hilarious and awesome.

This is just hilarious to look at. pic.twitter.com/AEzd5OTlOv

• I loved the uni matchup tonight. In a vacuum I don’t love chrome but the chrome vs. chrome was great (where were the refs’ chrome hats?) OSU’s chrome-black-orange look was in the top five of what was a really strong uni year.

•  James Castleman had as many rushing TDs as Tyreek Hill this season. And more receiving yards than Ra’Shaad Samples, CJ Curry, Chris Lacy and Rennie Childs.

• To add to that theme — Mason Rudolph now has two tackles.

• Rudolph had more passing yards in the first half than OSU had total in four of its 10 games without him.

• Rudolph and Washington are here for three more years. In case you had forgotten.

• My favorite part of the Castleman TD was Rudolph going in motion like he was Casey freaking Dick and we were running the Wildcat with DMC. Except it was James Castleman!