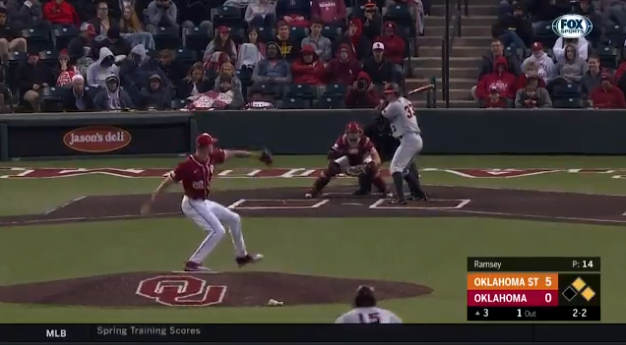 Oklahoma State put the smack down on Oklahoma on the diamond Tuesday evening in the first Bedlam matchup of the season.

The 7-1 win over the Sooners in Norman was OSU’s fourth consecutive victory in the rivalry (ahem, not a rivalry!) series, and it snapped the Sooners’ three-game winning streak to drop them to 17-10 on the season.

As teams are wont to do, Oklahoma State embodied the resiliency of its head coach by scoring six of its seven runs with two outs.

The game was over before it ever really started, too. OSU scored five in the second inning to take a 5-0 lead on the strength of Colin Simpson’s grand slam, and it would add one run over the next two innings to build out a nice cushion that OU wouldn’t touch.

Always a great night at the yard when you beat your #Bedlam rival! Recap & highlights from the Pokes win over the Sooners tonight in Norman: https://t.co/4pg8T103ek #GoPokes pic.twitter.com/8lgwXH2BMq

Oklahoma State sophomore Ryan Cash was money, too, logging three hits and adding an RBI in the win. Freshman Dylan Gardner finished 2-for-3 and added an RBI of his own.

On the mound for the Pokes, C.J. Varela kept his perfect 2-0 record intact after throwing for five innings and allowed one run. Noah Sifrit closed the game and recorded the first save of his career by holding OU scoreless over the final four innings.

A Bedlam win for Josh Holliday and his club is a nice way to bounce back after losing to Texas earlier this week in a 3-game series, and the good news should continue into Thursday.

The program announced on Wednesday that a “major announcement” regarding the baseball program will be made tomorrow, and one can only hope that plans of a new facility for the Cowboys may finally be revealed.