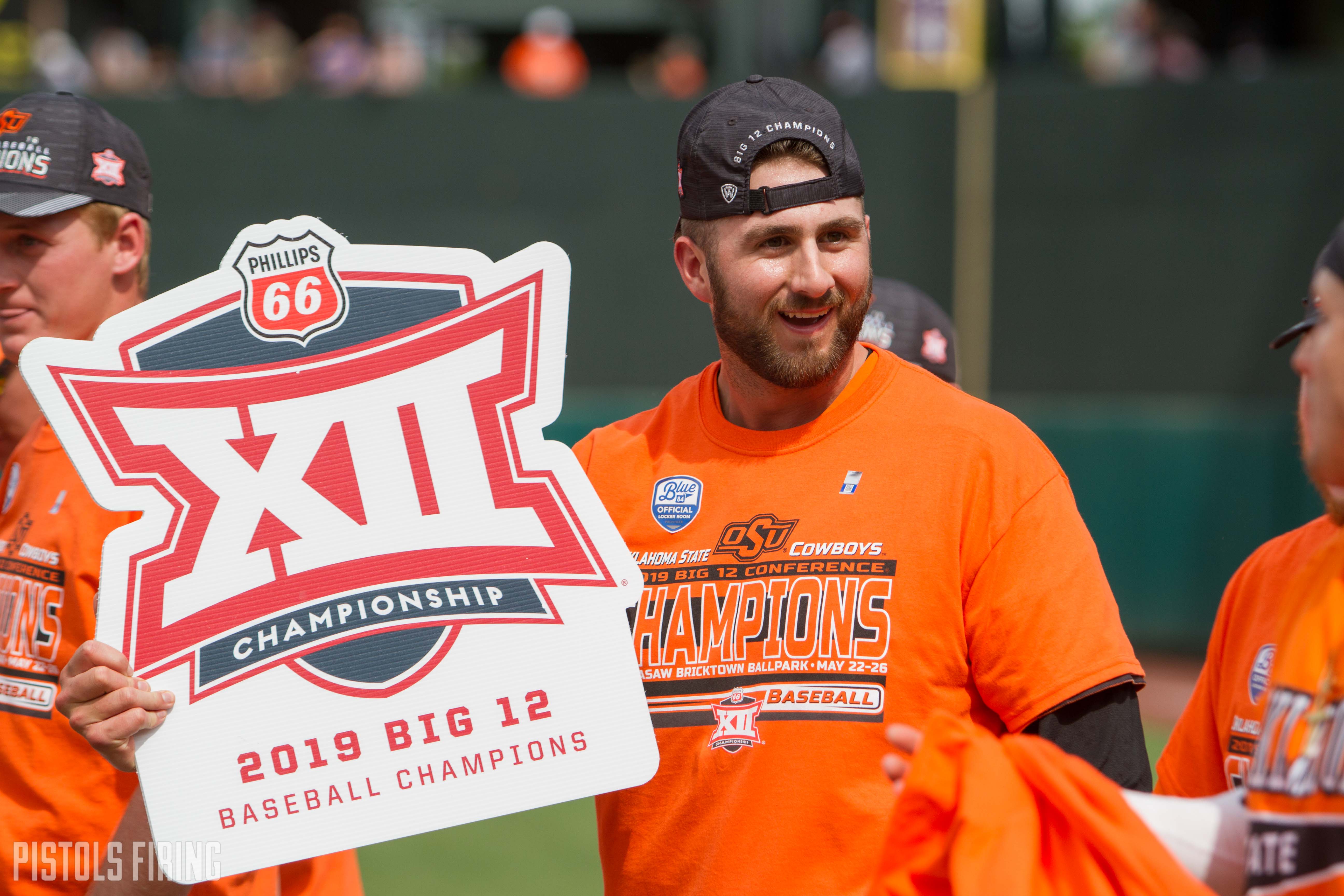 STILLWATER — After a weekend full of baseball, here is some more baseball.

Oklahoma State found out its regional opponents Monday, and it was announced that the site of that regional would change. After the selection show Josh Holliday and a few players met with the media. You can watch those interviews here, but here are some of the highlights.

Return to the Brick

Five games in Bricktown since Wednesday just wasn’t enough for the Cowboys.

Allie P. Reynolds Stadium won’t host a regional this weekend after all the rain that has hit Stillwater the past few weeks, so the decision was made for the Cowboys to host at Bricktown Ballpark in Oklahoma City, where OSU just won the Big 12 Tournament.

With OSU not being able to host in Stillwater and not receiving a Top-8 seed for the tournament (more on that later), it makes it unlikely Reynolds Stadium will ever host another game. The Cowboys are scheduled to open O’Brate Stadium in 2020.

“Obviously we had the intention of playing here (at Allie P.), but as you guys know, the weather is not something you can control,” Holliday said. “The amount of rain that we’ve received the past week as well as what’s on the way, the facility and the risk of it not being playable in the outfield is just something we couldn’t afford to risk. We’re thankful that Oklahoma City is giving us a chance to host this great tournament in a ballpark and in a setting that will be awesome.

“As great as this old park is, it doesn’t drain real good. The outfield is the real concern. The infield is covered. But, it just kept raining.”

As sad as it sounds that the Allie P. era could be over, the Bricktown Ballpark still allows for a solid home-field advantage for the Pokes. There were 6,860 fans at Sunday’s Big 12 Championship game. That’s nearing double Reynolds Stadium’s 3,821 capacity.

Fans traveling to the OSU softball team’s Women’s College World Series games won’t have to travel far either, as Hall of Fame Stadium is about a 10-minute drive from the Bricktown Ballpark.

“I hope we can set some crazy, crazy records this weekend for fans in that area going to see the softball team and coming over to Bricktown,” Holliday said. “Why not? Let’s paint Oklahoma City orange for a weekend and make it something we can celebrate.

“I think we had close to 7,000 fans on a 30-minute notice on Sunday, right? We’ve got a four- or five-day notice, so let’s pack Bricktown, make it orange and create some special moments.”

OSU has played six games in Bricktown this season (five this past week and one against Oklahoma), and the Cowboys are 4-2 there.

“I think Bricktown is kinda like our own atmosphere,” Colin Simpson said. “It’s kinda like a home field. Even when we were in the Big 12 Championships, that place was flooded with bright orange, and there were only a couple West Virginia fans there. Even though it’s not actually at home, I think it’s more of a second home field for us.”

Missing Out on Top 8

There is still a chance OSU hosts a Super Regional if the Cowboys win this weekend’s regional, but it’s not a given.

The Cowboys were seeded ninth, needing to be in the Top 8 to be guaranteed home-field advantage to the College World Series. Texas Tech got the eighth seed, meaning if OSU and Texas Tech were to both win their regionals, OSU would have to go to Lubbock for the Super Regional round.

“It’s tough,” Lienhard said. “We put ourselves in a situation to get one of those Top-8 seeds, and not being able to get it, it kind of throws a little wrench in the plan a little bit. But that can’t really be our focus right now. Right now, we just gotta focus on what’s at hand, and that’s Harvard on Friday.”

Dallas Baptist, Florida and Army are all in Texas Tech’s regional, and if one of those teams were to upset the Red Raiders and OSU takes care of its business, the Cowboys would host a Super.

“I was actually kinda shocked,” Simpson said. “I knew we were in the talk, and I don’t pay a lot of attention to numbers, but I hear that we have like the No. 2 strength of schedule, and our RPI was I think seven or something like that. So, I would definitely say that I think more than just me were pretty shocked we didn’t get one of the national seeds.”

OSU, UConn, Nebraska and Harvard will be in Oklahoma City this weekend. Those four teams are a combined 130-76 this season. Here’s a quick briefing on the non-OSU teams.

UConn (36-22): The Huskies are one of three American Athletic Conference teams in the 64-team field, joining Cincinnati and East Carolina. UConn took two of three games off then-No. 4 Louisville to start the season. The Huskies were 12-12 in conference play and advanced to the finals of the AAC Tournament before falling to Cincinnati.

“Connecticut is a team that for many years has been one of the toughest teams in college baseball and playing a vast majority of their games on the road,” Holliday said. “They’ve had some great some great players. They’re going to be very comfortable traveling and playing good baseball.”

Nebraska (31-22): OSU’s former Big 12 foe, Nebraska also made it to the finals of its conference tournament, but the Huskers fell 3-1 to Ohio State. Nebraska played six games against Big 12 teams this season, going 4-2 against those opponents. The most impressive of those wins was the Huskers’ 2-1 victory against Texas Tech on March 1.

“I know Coach (Daren) Erstad at Nebraska and have seen a little bit of film on their team,” Holliday said. “Obviously, they’re playing in the Big Ten and playing a lot of good baseball.”

Harvard (27-14): The Ivy League’s only representative in the 64-team field, Harvard finished the regular season atop its conference’s standings at 14-7 and beat Columbia in two straight games to win the Ivy League Playoff Series. Five Harvard players are hitting above .300 this year. Senior first baseman Patrick McColl leads the way with his .399 through 173 at-bats.

“They’re obviously gonna come in here very well prepared,” Holliday said. “I have not gotten a chance to see film on them. I don’t know a ton about them, but I will by the end of today.”