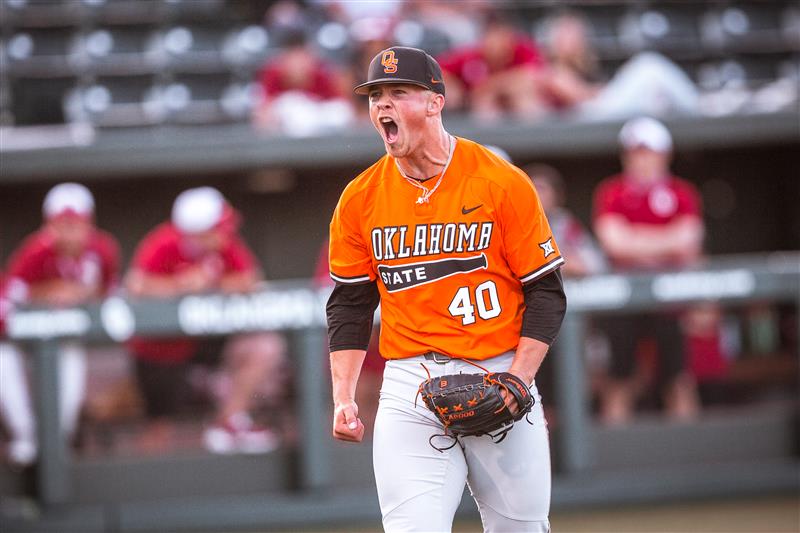 Despite a stretch of poor form, the Cowboys showed some grit Sunday afternoon in Norman.

Oklahoma State avoided a Bedlam sweep with an 8-7 victory in 12 innings thanks to some late hits from some Cowboy elder statesmen and a solid relief outing from a freshman from Westmoore.

In the top of the 12th inning, super senior Carson McCusker singled through the right side. It was his third hit of the day. After a Justin Campbell fly out, Cade Cabbiness, another super senior, managed a two-out single up the middle to move McCusker to third.

From there, Bryce Mathis blooped a ball between the center fielder, left fielder and shortstop to score McCusker before Mathis was thrown out at second.

The one run was all freshman righty Kale Davis needed. Davis threw his sixth and seventh strikeouts of the game in the bottom of the 12th to salvage the series for the Pokes.

Max Hewitt and Caeden Trenkle hit home runs for the Pokes on Sunday. Hewitt’s was a solo shot to left in the third while Trenkle hit a three-run bomb to right in the fourth.

In four games against OU this season, Hewitt is hitting .538 with six RBIs.

At least some of the credit for Sunday has to go to Noah Sifrit, who wore (by my count) 16 hats to spur the Cowboys’ rally. Dylan Gardner also gets a hat tip (or 16 hat tips) for the more that $1,000 worth of shades.

Sunday’s win moves the Cowboys to 25-14-1 on the season and 8-10 in conference play. OSU plays bottom-of-the-league Kansas next weekend in Lawrence.