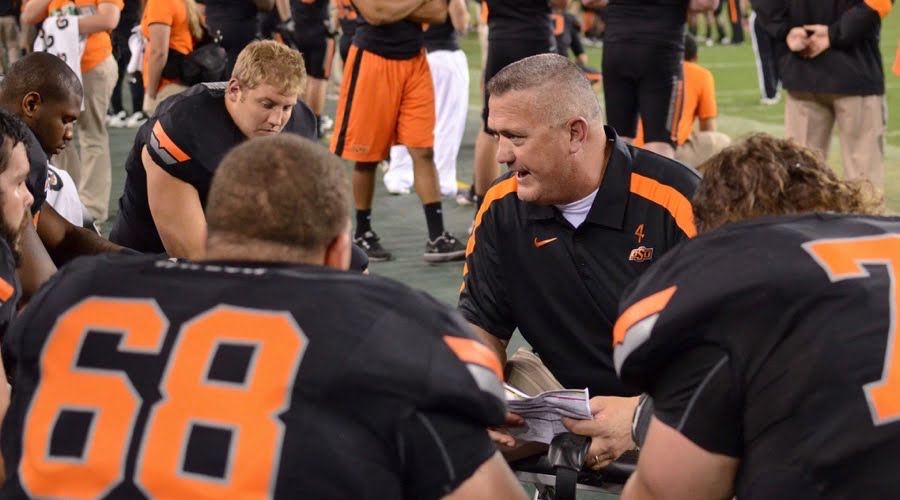 You knew the day was coming but that doesn’t make it any less humorous.

Oklahoma State has officially requested sworn statements from Charlie Strong and offensive coordinator Shawn Watson of Texas on who calls the Horns’ plays, according to the AP.

The issue at hand is whether Joe Wickline is or isn’t calling offensive plays for Texas. The answer will lead to either a $600,000 windfall for OSU or simply a loss of attorney expenses.

It’s an issue I explored in-depth here (what exactly does “calls plays” mean?) and is explained below:

When announcing his staff in January, Strong said Watson would collaborate but that “Joe will call the plays on offense.” Two months later, Strong said Wickline would be “involved” in play-calling but that “the one final voice will be Shawn.”

After hearing Strong say Watson had “final” call on plays, Oklahoma State athletic director Mike Holder informed Wickline that the school considered him in breach of contract and sued him in October for $593,478 in damages.

I love the thought of Holder just sitting in his office refreshing TexasSports.com waiting for some new quotes from Strong. Boom, there they are!

To its credit, Texas isn’t exactly standing in the way of the suit.

“I said I was happy to facilitate scheduling for convenience,” Texas VP of legal affairs Patti Ohlendorf said on Monday.

“I don’t know the details of the litigation. We do understand coach Wickline’s defense[1. Hilarious word choice here, btw.] and we believe he does call plays,” Ohlendorf said.

So why is OSU pursuing this?

“We believe they have relevant and material information that will be important to a jury in Oklahoma deciding why the (Wickline) contract is not being honored,” said Sean Breen, Oklahoma State’s Austin-based attorney.

Texas ranked No. 111 in points per drive on offense in 2014 so to me the most probable outcome is that testimony leads to nobody claiming to be in charge of calling plays for that mess.