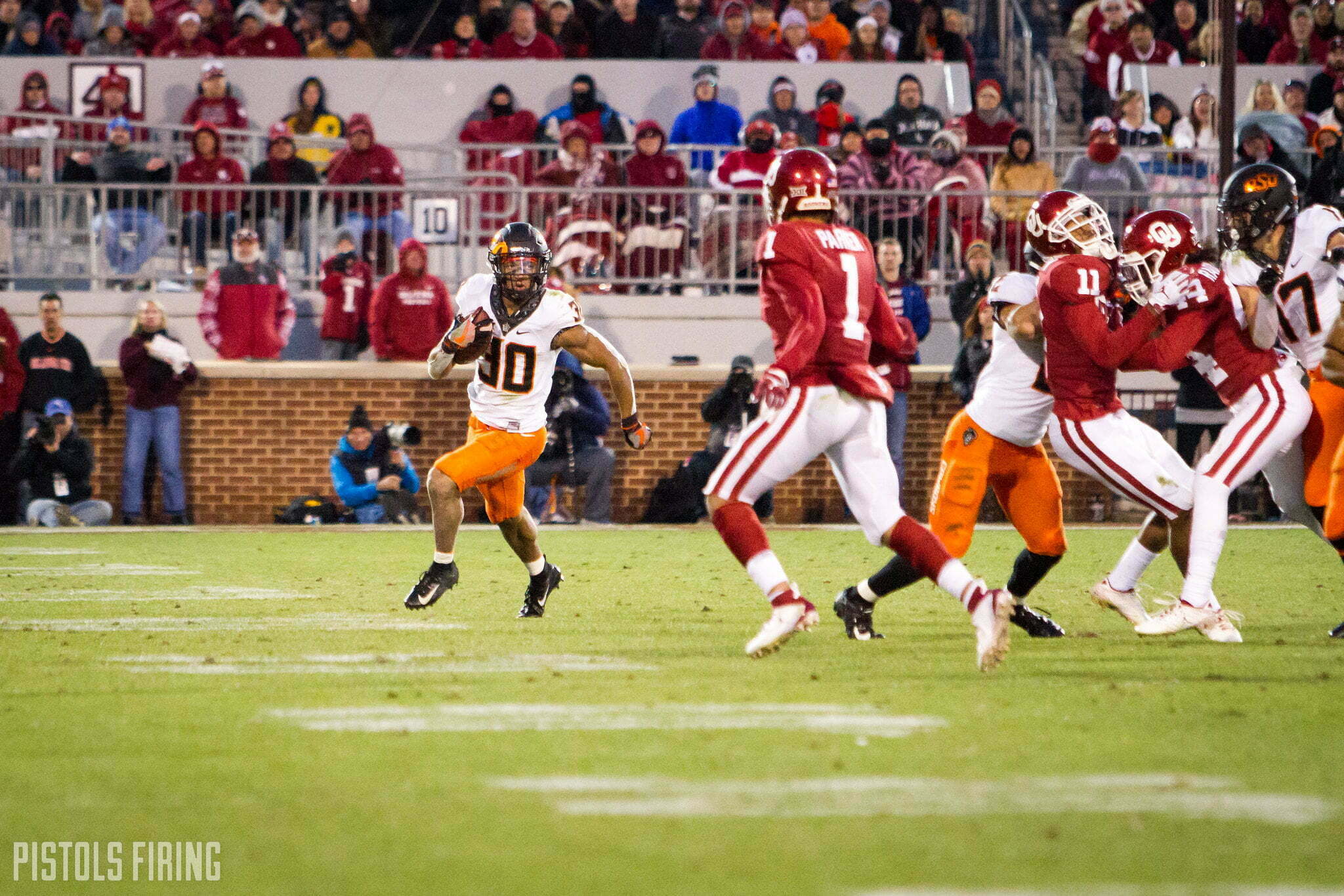 As we move through our review of Oklahoma State’s 2020 football schedule, this third leg of the slate starts in Norman.

After starting off against a pair of familiar foes in Oregon State and Tulsa, Oklahoma State adds a familiar-type filler with FCS school Western Illinois. Big 12 play begins with a pair of vengeful QBs in TCU’s Max Duggan and Iowa State’s Brock Purdy before the Cowboys head to the Mad Hatter’s house in Lawrence.

So by the time the Cowboys get to mid-October, we’ll know whether or not this 2020 squad will have a chance to contend for the Big 12. If they pass those early tests, Oct. 24 will likely be for a stranglehold on the league.

The most compelling storyline for this year’s rivalry game involves the two Cowboys who signed up for one final trip to Norman. If you say you’re coming back to win a national championship that means a win over Oklahoma in Norman.

Bedlam 2018 served as the passing of the torch from Justice Hill to Chuba Hubbard. After Justice went down with injury, Chuba chewed up 104 yards of grass on Owen Field while scoring three touchdowns and catching five passes for 49 yards.

That was the first triple-digit rushing game of Chuba’s career. In the 16 games since, he’s only been held under 100 yards twice (and once was basically on purpose).

In Bedlam 2019, as the only one of OSU’s Big 3 to participate, Chuba matched his rushing total in Norman exactly with 104 yards. But that was his second-lowest outing all season and the Cowboys got rolled over at home.

The last time Tylan Wallace visited OU, he caught 10 passes for 220 yards and two touchdowns and was this close to an 11th that would have given OSU a late lead. Thanks to his mid-year knee injury in 2019, Tylan has even more unfinished business against the Sooners.

With he and Sanders both sitting out the last go-round, this will be the trio’s only chance to earn that elusive Bedlam win. The Sanders-Wallace-Hubbard era is yet to be defined but a win against the Sooners would solidify them as one of the top Big 3s ever to play at OSU.

Key to Success: Spencer vs. Spencer

At the time of this writing in mid-February and if everyone stays healthy, it appears that the Cowboys could hold an edge over the Sooners that they haven’t held since 2013 when Clint Chelf lined up opposite Blake Bell — experience at quarterback. (I type this while simultaneously pounding on the nearest piece of wooden furniture.)

If things go as planned, former five-star passer Spencer Rattler will have just six starts under his belt to Spencer Sanders’ 16. Sanders will have already taken his freshman lumps with Rattler still adjusting to the enviable role as Lincoln Riley’s starting QB.

Is experience behind center alone enough to get the Cowboys over the crimson hump? That’s a loaded question.

Sanders will need to have continued the improvement we witnessed before he went down with injury and have taken a couple big steps forward. If that happens, and Spencer Rattler still looks like a freshman, OSU could hold at least that advantage.

I’m lumping Weeks 8 and 9 together because they each represent a chance to get a nasty taste that will probably still be lingering from the year before. Oklahoma State’s two worst outings in 2019 were easily its Week 6 loss at Texas Tech right before its Week 7 Homecoming loss to Baylor.

The Baylor loss was made a little more potable after the Bears finished with 11 wins and made their way to the Big 12 title game in Arlington. The loss in Lubbock — one of only two Big 12 wins by Tech — is still putrid, but it’s also explainable.

Spencer Sanders gave up five total turnovers and the Cowboys defense gave up 586 total yards to Tech (the Red Raiders offense scored 45 points against two defenses last year — Oklahoma State and Montana State). Both of those issues seemed to be working themselves over the second half of last season.

Charlie Brewer and Alan Bowman should each be back to lead his respective team. Brewer returns for his senior season and a chance to go 2-0 as a starter against the Cowboys. Bowman, who missed the majority of last season due to injury, is set to reclaim the reins of Tech’s offense after Jett Duffey’s transfer.

Key to Success: A Games from the Stars

With a new coach regime and the rebuild (?) underway in Waco, it’s hard not to look at last year’s campaign as much more than lightning in the bottle. Texas Tech has even farther to go.

If Oklahoma State’s Big 3 is playing up to the level we expect, and its defense is not a flat-out disappointment by this time in the year, talent alone should lift the Pokes past both the Bears and the Red Raiders.