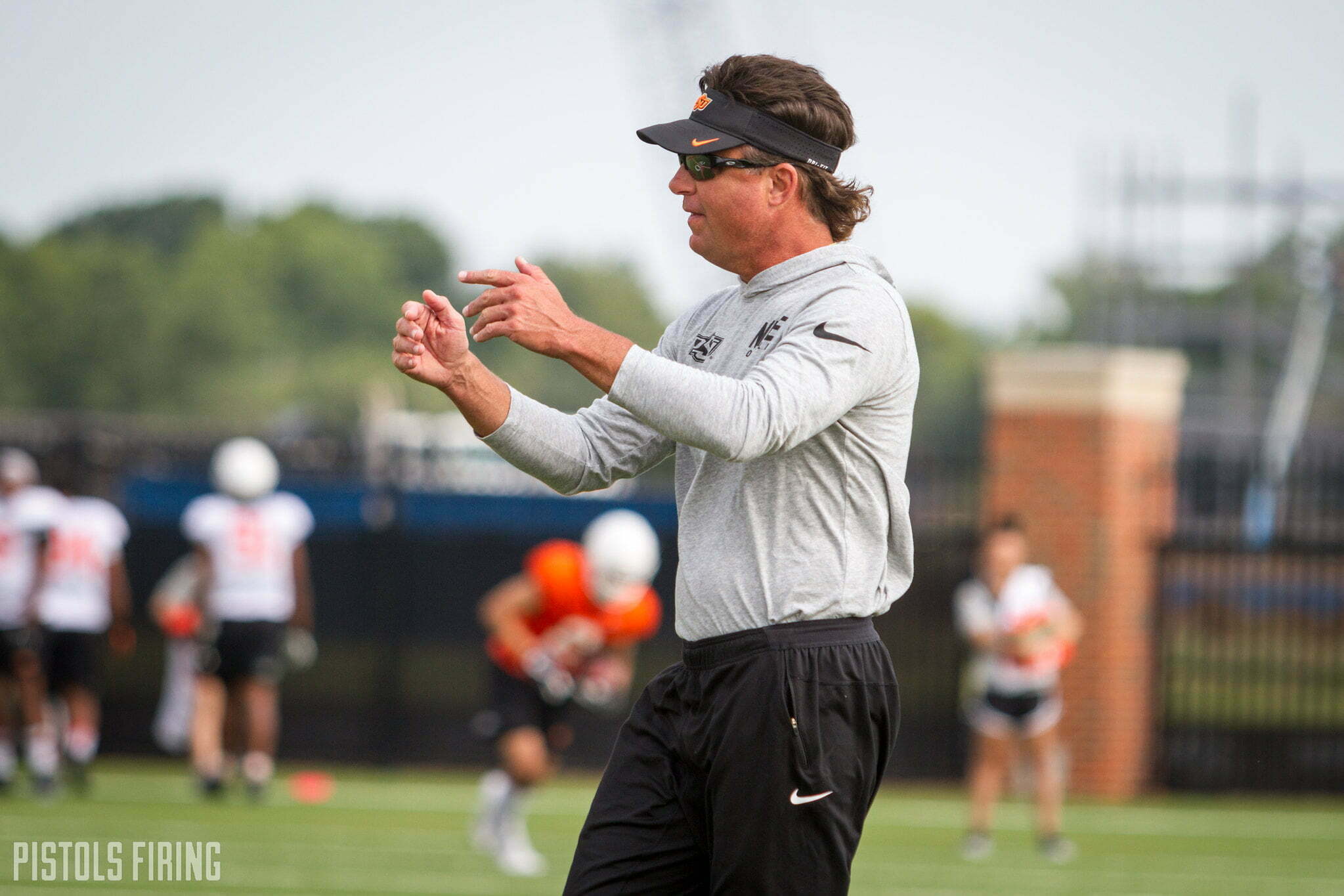 Oklahoma State released its first official depth chart of the 2019 season on Friday, just minutes ahead of Mike Gundy’s weekly media luncheon, and there are plenty of things to learn from it.

While Gundy and his staff don’t rely on it as an end-all-be-all — and there’s certainly the possibility this will change before kickoff and throughout the season — it’s a decent indicator as to how each position should look to start the year.

Let’s get to some key takeaways.

Perhaps the least surprising or of all on the depth chart was the one separating Dru Brown and Spencer Sanders. While Brown’s name is listed first, Sanders is a line below and the or in between the two signifies that neither Brown nor Sanders has outright taken the job as QB1.

This jives with what everything we’ve heard from the coaching staff all summer. Gundy at the beginning of fall camp said if he had to guess, he’d say both would play. At the end of fall camp, his tune hadn’t much changed. The news here is essentially no news at all: that Brown and Sanders, as expected, are on equal footing. The staff has already entered into discussions about how a two-quarterback system will work, as we wrote earlier this week, as OSU prepares for Oregon State next Friday.

“We have a really good plan in place,” said Gundy on Friday. “It’s not something I’m going to discuss publicly at this time. There isn’t really anything that has changed that would be worth talking about today. Both of them are getting better every day.”

There’s been some scuttlebutt in recent weeks that Malcolm Rodriguez and Kolby Harvell-Peel have been doing some work at linebacker … but whoa! Rodriguez, who started last season at safety, moving to linebacker and being tabbed as a starter at the spot is certainly a move that widens the eyes.

Rodriguez is the starter at the position ahead of Calvin Bunadge, who is listed as LB2 along with true freshman Na’drian Dizadare. Bundage has been banged up most of the summer and was just recently cleared to return to full activities, so that’s probably a huge factor in how this position shakes out.

Someone in the organization insinuated to us earlier this summer that this could happen. That linebackers the way we think about them aren’t really a thing anymore and that we could see more and more secondary-type guys seeping into the position.

For his part, Rodriguez is as heady a player as they come. That could help him overcome some of the struggles he could have physically moving from safety to linebacker.

“If you’re going to draw one up, his agility and speed would be a big advantage there,” said Gundy. “His size could be an issue, we’ll see how it works. A lot of the game is played side to side now. It’s not played straight ahead so that allows him to come down and help us out a little bit in that position.”

Because of the way the game has changed so much in recent years, speed and agility take priority over a hard-hitting traditional linebacker. Can Rodriguez be the shining example of what a next-generation linebacker needs to possess to be successful? We’ll see. But by OSU’s calculations, he’s a good fit to be able to either drop in coverage without giving up any advantage, and he’s agile enough to move sideline-to-sideline as a mirror to the quarterback.

Here’s how both linebacker spots shook out on the depth chart:

3. What Rodriguez’s change means for safety

With a starter moving closer to the line of scrimmage, it opens up opportunity for the group of young safeties in line for more PT. We’ll see more Kolby Harvell-Peel and Jarrick Bernard this season after both had stellar freshman campaigns, but we’ll also see more Jason Taylor II, Kanion Williams and corner-turned-safety Tanner McCalister.

Of those who perhaps benefited the most from Rodriguez moving to LB is Tre Sterling. A 6-foot-1 redshirt sophomore, he played sparingly last season — primarily on special teams — but is now in line to take one of the three starting spots at safety. Sterling signed with OSU out of Sunnyvale, Texas in 2017, where he starred for the 4A school as a defensive back and running back. He’s grown an inch and added 20 pounds to his frame since arriving on campus two years ago.

Me when I found out Chuba, as had been rumored in recent days, was indeed a kick return specialist on the depth chart like he was last year.

Some people may not like the idea of RB1 and RB2 exposing themselves to injury by being No. 1 and No. 2 on the kick return depth chart. I am not one of those people. They’ve got the speed and vision to dodge through traffic, and they’re probably the most qualified of anyone on the roster to take the spots after the duo combined for 25 kick returns and 547 yards last season.

After losing every starter from the defensive line last season, this group going into fall camp figured to be a weak spot. And maybe it still will be. But the guys who locked down spots on the two-deep should all provide some cautious optimism about the unit’s overall strength ahead of the season, maybe more so because of who’s not starting than because of who is.

Transfers Israel Antwine and Sione Asi — both thought to be terrific talents — are both backups on the two-deep at defensive tackle. That’s a good sign given how proven especially Antwine is. Returning pieces Brendon Evers, Cameron Murray and Brock Martin all earned starting gigs; and freshmen Jayden Jernigan and Trace Ford have found themselves on the depth chart after impressing early. Gundy raved about Ford on Friday.

Time will tell if there is a standout rusher among these — a Jordan Brailford-like player who can impact the game by getting after the QB at an elite level — but I think there should be some confidence that this unit’s depth may outweigh concerns about its lack of star power. Between DT and DE, this unit looks downright solid: