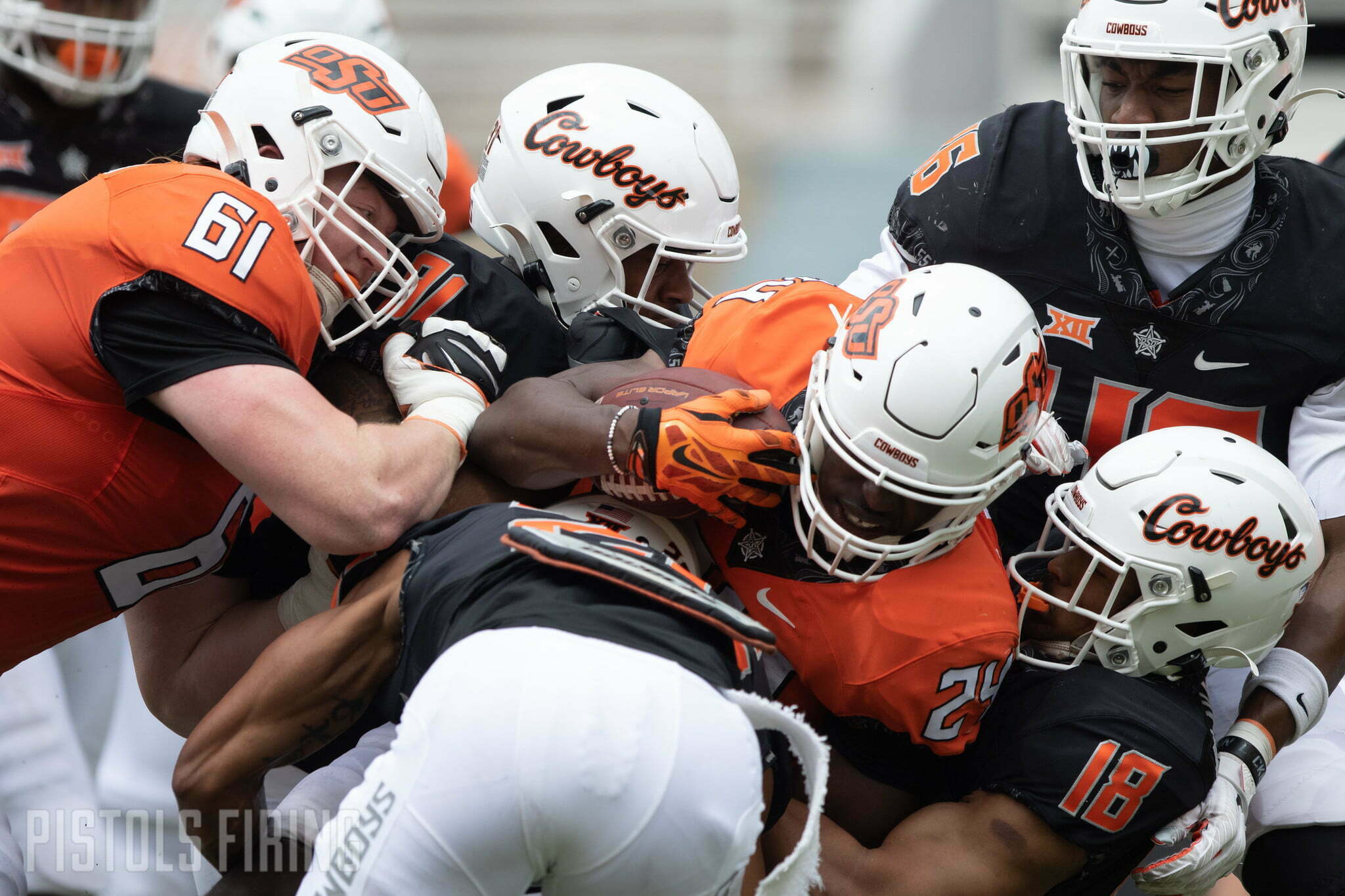 The Cowboys return to practice this week, as the machine that is college football is set to begin again.

Oklahoma State starts fall camp on Wednesday looking to build off a Fiesta Bowl-winning 2021 campaign. But to do that, the Cowboys will have to call upon some new blood to replace outgoing contributors. With a few starting spots left up for grabs, here is a breakdown of position battles to watch during fall camp.

With Spencer Sanders’ lay-it-all-out-there, “Tasmanian Devil” style of play, injuries will always be a concern. He has missed at least one start in all three seasons as a starter.

So if OSU does need to go to an arm out of the bullpen, who will it be? Gunnar Gundy seems to have had the lead through spring ball and feels like the favorite considering Gundy has a year jump in terms of knowing the playbook and having a few snaps of in-game experience. But the ever accurate Garret Rangel starts his college career after being a four-star prospect, and he did himself some favors by enrolling early this past spring.

The running back position has been an interesting one for Oklahoma State the past few seasons.

In 2020, Chuba Hubbard was supposed to be the guy, but injuries forced more of a three-headed monster among Hubbard, LD Brown and Dezmon Jackson. Then 2021 was supposed to be Brown’s year only for him to get hobbled early and for Jaylen Warren to turn into a world-beater.

Dominic Richardson is OSU’s guy heading into 2022, but while he has had a few standout performances when called upon, he isn’t a totally known commodity. So there is the chance for this season to be more of a by-committee approach than in years’ past. What that committee looks like is the big question.

Sophomore speedster Jaden Nixon turned heads through spring ball after running for 122 yards as a true freshman last season. OSU also brought in Texas A&M transfer Deondre Jackson who had just three carries in two seasons with the Aggies. Then there are four-star freshmen Ollie Gordon and CJ Brown, two guys who enrolled early and project to be great players for the Cowboys in the coming seasons.

With Josh Sills and Danny Godlevske gone and a handful of linemen sitting out spring ball nursing injuries, this is the probably the most pressing thing for the Cowboys to figure out before their Sept. 1 kickoff against Central Michigan.

There are a few variables that could flip things around, but I’m most confident in three positions heading into fall camp: Caleb Etienne at left tackle, Preston Wilson at center and Hunter Woodard at right guard. That leaves left guard and right tackle as question marks, and I think a lot of it will come down to whether OSU’s transfers (Jason Brooks, Casey Collier and Tyrone Webber) are ready.

At 6-foot-4, 295 pounds, Brooks could play at a guard or tackle spot, and where he lands could, by default, settle the other position. If Brooks plays at left guard, Jake Springfield or Casey Collier would likely play at right tackle. If OSU’s staff put Brooks at tackle, Taylor Miterko probably starts at left guard. Webber could also shake some things up here as well. Recruiting services listed Webber as a tackle, but after the spring finale in April, Gundy said Webber is “agile and strong enough” to play anywhere on the offensive line.

Mason Cobb and Xavier Benson look to be in position to succeed Malcolm Rodriguez and Devin Harper, but it’s hard to say whether that new duo will get such a high percentage of snaps like Rodriguez and Harper played last season.

There could be room here for guys such as Lamont Bishop, Nick Martin and Jeff Roberson to earn spots in a rotation. Those five players have a combined 76 Division-I tackles. Malcolm Rodriguez had 123 last season. This is a group that will have to grow together as the season progresses, starting with a strong fall camp.

Similar to Oklahoma State’s situation at linebacker, there are going to be a lot of new faces on the back end of OSU’s defense. Jason Taylor will resume his starting role, and highly touted recruit Kendal Daniels seems to be in a strong position to start in his redshirt freshman season. Elsewhere, there will likely be some solid competition for snaps.

Thomas Harper, Trey Rucker, Lyrik Rawls, Sean Michael Flanigan and Kanion Williams all seem ready to take a more solid role in 2022, and with OSU using three safeties at a time, all could find a way to rotate in.

After a freak injury in 2020, Alex Hale was usurped in 2021 after a rough start. Tanner Brown came in and became the Cowboys’ go-to guy, going 17-for-21 on the season.

Still, if Hale could find his preinjury 2020 form, there could be a battle as to who is kicking field goals for the Cowboys in 2022. Here is a look at their career stats to this point: