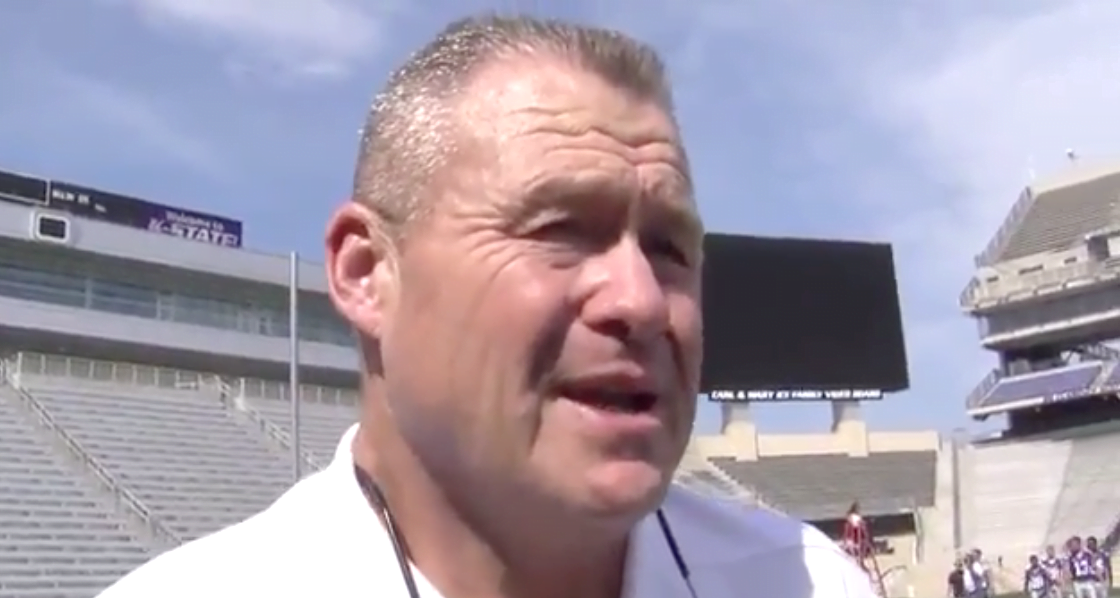 After a report surfaced that he would lose his offensive line coach Josh Henson to Texas A&M, Mike Gundy took less than 24 hours to nail down and officially announce his replacement — on Twitter, no less *fart noise* — former Kansas State OL coach Charlie Dickey.

In the days since, we’ve taken a look at some of the numbers from Dickey’s K-State offenses, where in addition to position coach, he also served as running game coordinator and co-offensive coordinator.

We’ve also prognosticated on how he and new offensive coordinator Sean Gleeson’s styles will mesh, as well as looked at how well the 30-year coaching veteran can recruit.

So to sort of wrap up our introductions with the man in charge of the trenches in Stillwater — now the fifth in seven seasons — here are three things that you should know about Charlie Dickey.

1. Dickey Could Be a Longterm Fix

Gundy loves consistency and continuity as much as he loves bedowngrading social media platforms that he uses for official business. It’s the reason he said he hired an unknown out of Shippensburg as his last OC, and probably one of the reasons he hired an unknown from Princeton to be his next one.

Dickey, the grizzled veteran of an O-line coach started at Kansas State at the beginning of Bill Snyder’s second tenure and stayed throughout, receiving two promotions in the final three years and earning top pay of a Snyder assistant — tied with the head coach’s own son — in 2018. And Gundy even mentioned in his Twitter announced that he had tried to hire Dickey away from Manhattan in the past but that his loyalty to Snyder wouldn’t allow it.

So we can infer that not only is he loyal (Gundy swoons), he’s someone head coaches want to keep around (see constant promotions and raises).

Loyalty, continuity, old school. I hope you have your Gundy Bingo Card handy.

As Kyle Boone pointed out in the above-linked post, Dickey didn’t recruit to the star level that Josh Henson has — though some would argue that it’s even harder to bring dudes to the Little Apple than it is to Stillwater — but he has molded plenty of three-stars (and less) into legitimate Power 5 linemen. And he’s turned a handful into absolute studs.

Dalton Risner is currently preparing for the NFL Draft Combine and, depending on who you ask, is projected to go anywhere from the first to the third round. But the two-time All-American tackle came to Kansas State as a three-star center and the 509th-ranked prospect in his class.

Scott Frantz was ranked No. 1,023 in the 2015 class by 247Sports. After a year redshirting he earned Big 12 All-Freshman team honors, among others.

Code Whitehair was ranked in the high 1,100s by 247 when he came out of Abilene, Kansas. Dickey turned him into a second round pick by the Chicago Bears.

B.J. Finney was not even ranked by 247 Sports and he earned All-American honors in 2014, won Big 12 Co-Offensive Lineman of the Year and has played 43 games in three seasons for the Pittsburgh Steelers.

We could go on, but the point is that Dickey has showed the ability to churn out quality linemen even with less than elite talent coming in.

His former boss, Bill Snyder, gave The Wichita Eagle some insight into his tough coaching style and why it’s effective.

“What Coach Dickey does is, he just does a great job of coaching young guys,” K-State coach Bill Snyder said. “He teaches basics and is firm about it fundamentally. Our guys just get better and better, because he teaches well and is demanding, and he makes them work hard. When I say work hard, that is his expectation, and they want to live up to that expectation.”

“My expectations never change,” Dickey said in the same article. “You have just got to always be trying to put pressure on them to play their best. Sometimes, you end up coaching them even harder when you have experience so they don’t take anything for granted. I am still on them every day to do things the right way and to execute at a high level.”

3. His Players Love Him

As tough as he apparently is, he’s endeared himself to his players.

Congrats to Coach Dickey on becoming the O-Line coach at Oklahoma State! They really got a great one. Wish you and your family nothing but the best!

Risner chimed in as well. To get a “Go Pokes” from a Wildcat has to mean something.

You just hired THE best in the Bizz! @Coach_Dickey Will make OSU very Proud! #GoPokes https://t.co/aefumrNrgg

Frantz talked about Dickey as a leader and teacher in that article with The Wichita Eagle.

“Coach Dickey is an amazing coach,” Frantz said. “There is no one that knows more about X’s and O’s than he does. He pushes you hard and teaches you everything you need to know. I’m glad he’s my coach.”

While no one wanted to see Henson leave — least of all to head to College Station — it appears there are plenty of reasons to be optimistic about his replacement.