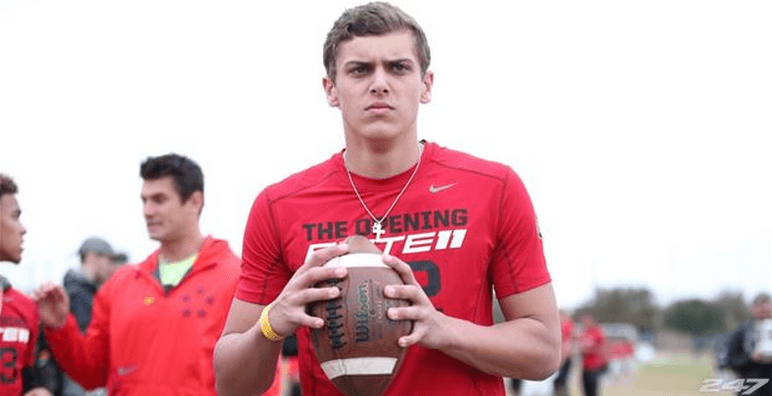 Texas A&M seems to be playing an old-fashioned game of “follow the leader” with OSU when it comes to the 2016 football recruiting cycle.

Oklahoma State is expected to sign at least one quarterback in the 2016 class, and that pursuit started in January when the Cowboys offered four-star dual threat quarterback Dillon Sterling-Cole, of Houston, Texas.

The recruiting process is ongoing, and the Pokes didn’t wait for a commitment from Cole, extending offers to several other quarterbacks. Less than 3 months later, the Aggies, among others followed suit and extended a scholarship offer to the 6-foot-2 Sterling-Cole.

This time around, it appears Texas A&M, like OSU, has moved on from Sterling-Cole and are in pursuit of Nick Starkel. He is OSU’s lone quarterback commit in the 2016 class.

Starkel received his first Div. I offer from Oklahoma State in January, and Starkel committed to Gundy and Co. in April.

Texas A&M has stuck to the rules of “follow the leader”, and Starkel announced Monday that the Aggies have extended him a scholarship offer, just a month after verbally committing to the Cowboys.

Recruiting always has twists and turns, and the story of Ronald Jones II is recent proof that even OSU isn’t immune to recruiting drama. (Too soon?)

Starkel is from Argyle, Texas, just three hours from College Station. While Texas A&M already has two five-star quarterbacks expected to compete next season in Kyler Murray and Kyle Allen, it will be interesting to see if Starkel sticks with his commitment with the Pokes or elects for a closer-to-home option in Texas A&M.