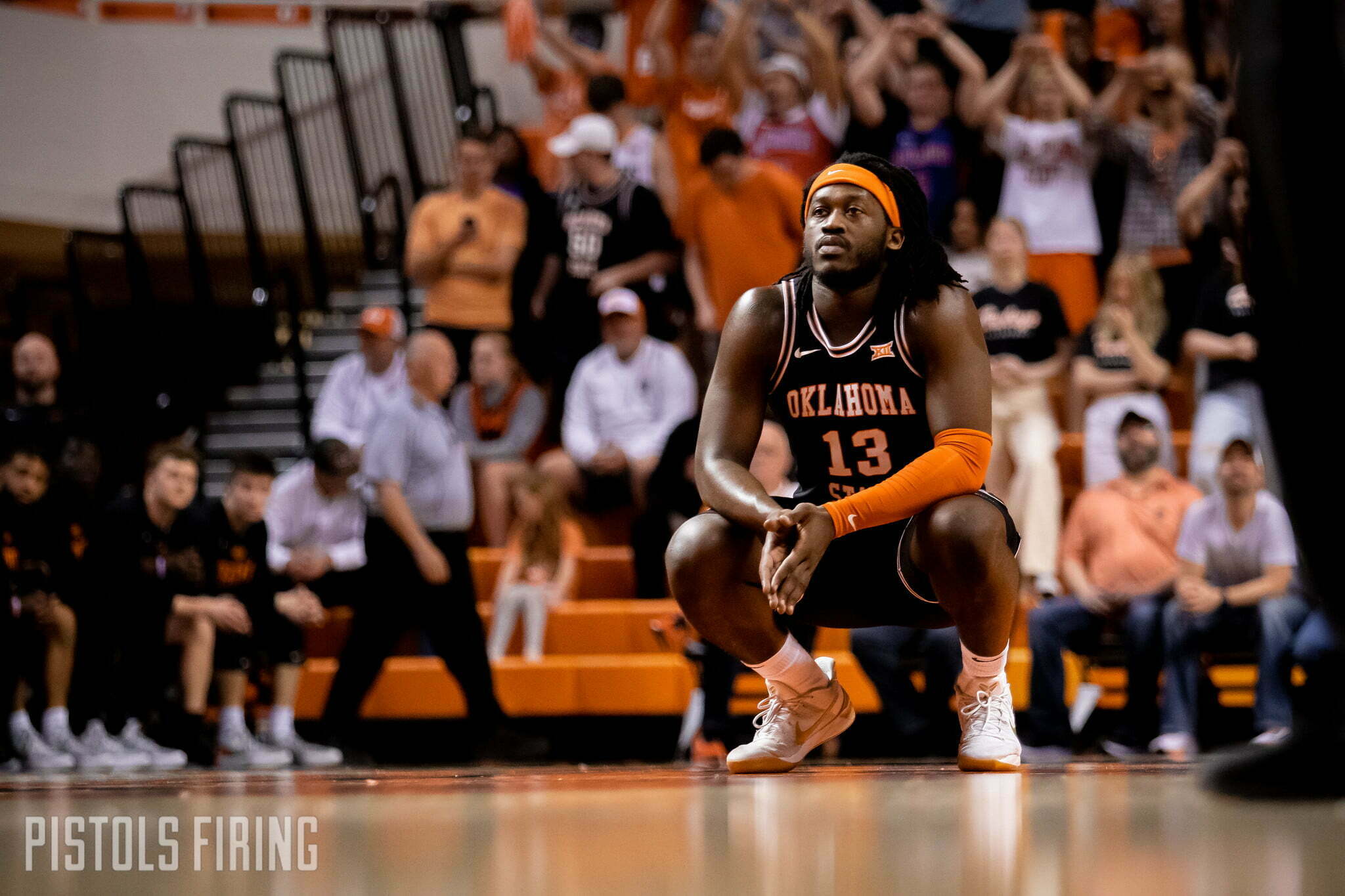 Oklahoma State’s season came to an abrupt ending on Saturday, but not in the way it normally would.

In college hoops, you know your last game is a possibility going in, but 18-, 19- and 20-year-olds are driven by the wild hope that it won’t be tonight. Pull off that comeback and you might live to fight another day. Hit that go-ahead 3 and you get to stay alive. That’s the fuel and fun of college hoops.

But in a lot of ways — and in one big way — that fuel and fun was taken away from Oklahoma State’s players, its program and fans before the season even started. An FBI investigation peering into actions of a former OSU employee that occurred prior to Mike Boynton’s appointment as head coach, had cast a significant shadow over the program for over four years. Then, ahead of what was viewed as an exciting 2021-22 season with an intriguing Cowboys squad, that big cloud opened up and OSU got hammered. A postseason ban, lost scholarships, the works. Cats and dogs.

The Cowboys finished their regular season with back-to-back wins over teams that are going dancing. OSU closed out Hilton Coliseum with a 17-3 run over the last eight and half minutes to walk away from Iowa State and ruin the Cyclones’ Senior Night. Then the Cowboys outscored No. 12 Texas Tech 13-2 over the last nine and half minutes on Saturday to edge out a win. I’ve heard and read a lot of people discuss that empty bracket spot in the Big 12 Tournament and the term that keeps coming back is apt, a shame. I’d sure love to see what this team could do given the shot.

“I got more emotional than I thought I would in all honesty,” said Mike Boynton after the Cowboys’ finale win over Texas Tech. “But as I started to reflect on watching the way those kids competed, it really just burns me to my core that they don’t have an opportunity to go and finish this thing the way everybody else has an opportunity to.”

For all the drama that Oklahoma State’s roster, coaches and fans have endured over the last four months, there was never any drama as to when the 2021-22 season would end. There was no hope of a trophy in Kansas City, or even a sliver of hope that the Cowboys could make a Tournament bid or cut nets or hoist more hardware in New Orleans.

The Cowboys were dead men walking through a lame duck season, which is what makes the fight the team showed through most of the last four months — especially a 2-0 final week — so impressive. Many teams would have dropped their heads, gone through the motions. Most would have bided their time which would have been understandable, if not expected.

But the Cowboys showed fight and grit throughout the season and validated the type of coach speak that jaded sports fans and followers roll their eyes at. Play for each other, for the name on the front of the jersey — in its sexy cursive font — and not the one on the back. But the Cowboys did just that. They lived up to the tropes of every cliché sports movie in the most real and authentic way. It wasn’t always perfect, and Boynton called out his team when he felt they didn’t lay it all on the line, but those were just aberrations.

If you woke up from a five-year coma — oblivious to the sanctions — with a thirst for OSU basketball and turned on the TV to just about any OSU game this season, you would never imagine that this team had nothing to play for in March. I think you’d come away satisfied. That’s a form of success.

“What those kids went through this year was really, really hard,” said Boynton. “I thought what was on display most of the season, certain in the last week, was an unbelievable amount of pride and high character. Care for the program. It’s what you want as a coach.

“Obviously, you want to win, but you want to see young men had a bigger vision of what life’s really about and that’s handling adversity, coming together, competing the right way. So I’m certainly very thankful for Bryce Williams and Isaac Likekele for everything they did for us, for me personally and to all of those other guys for being right there with them and with us and allowing us to salvage somewhat of a successful season.”

While he uttered “salvage” Boynton paused, tilted his head back and forth and pursed his lips as if he was trying to solve a problem or even consider the truth of what he was saying. Success is subjective, especially in a strange scenario like this in which the ultimate prize and driving force behind most seasons is off the table completely. You can’t measure it in wins, not fully. Because those wins were always a toll to get you to the postseason.

Boynton recalled a couple of close games that the Cowboys could have pulled out to end with a winning record, but he admitted that going 17-13 instead of 15-15 probably wouldn’t have made him feel much different.

The Cowboys landed on a poetic neutral .500 mark for their asterisk season. They went 8-10 in the meat grinder that is the Big 12 Conference and finished T5th in the league, which is where the Pokes were picked to land in the preseason. That alone is a small success.

Aside from wins and losses, we can gauge success by how one handles adversity and, through that lens, I think it’s easy to view OSU’s 2021-22 season as a success.

“Unfortunately for these guys, and I feel terrible about it because this should not be the end for them,” said Boynton. “They should have another opportunity to go and continue to compete. That’s disappointing, but I’m certainly thankful for and proud as a coach today to see how our team competed.”