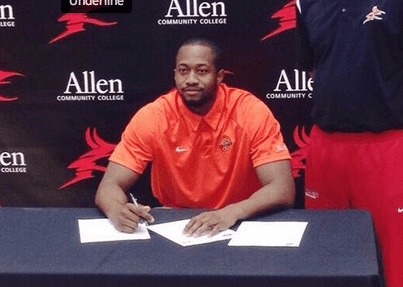 Jawun Evans, a five-star recruit by 247sports.com, made it official by signing his letter of intent along with Igor Ibaka, a 6’9 Power Forward JUCO recruit who played at Northeastern Oklahoma A&M College in Miami.

Evans is regarded as one of the top point guards in the country who can do it all. Last season, Evans averaged 19.3 points and 10.3 assists per game; leading his team to a Texas Class 4A state championship.

Travis Ford even whipped out the hyperbole machine when talking about Evans.

“He is one of the premier point guards, if not the best point guard, in America,” said Ford.

Ibaka, who is the younger brother of Oklahoma City Thunder big man Serge Ibaka, is a 6’9 post who played last season at Northeastern Oklahoma A&M College.

Ibaka averaged 14 points, 9.8 rebounds, and 1.2 blocks per game. Ibaka is currently at Allen Community College in Kansas. The two signees will join the Pokes for the 2015-2016 season.

It's official.I will be playing for Oklahoma State University next basketball season #OSU #Cowboys #CowboyBasketBall pic.twitter.com/jHaXfPbs9j

OSU fans seem to be excited about the signing.

As is Travis Ford.

“We haven’t had a post player of his size in our basketball program since Marshall Moses played for us.”

The Cowboys remain in the mix for No. 1 ranked Center Diamond Stone, who will announce his college decision on Nov. 21.

The last day to sign 2015 recruits is May 20 in the regular signing period, so there is plenty of time to add to what looks to be a promising 2015 recruiting class.