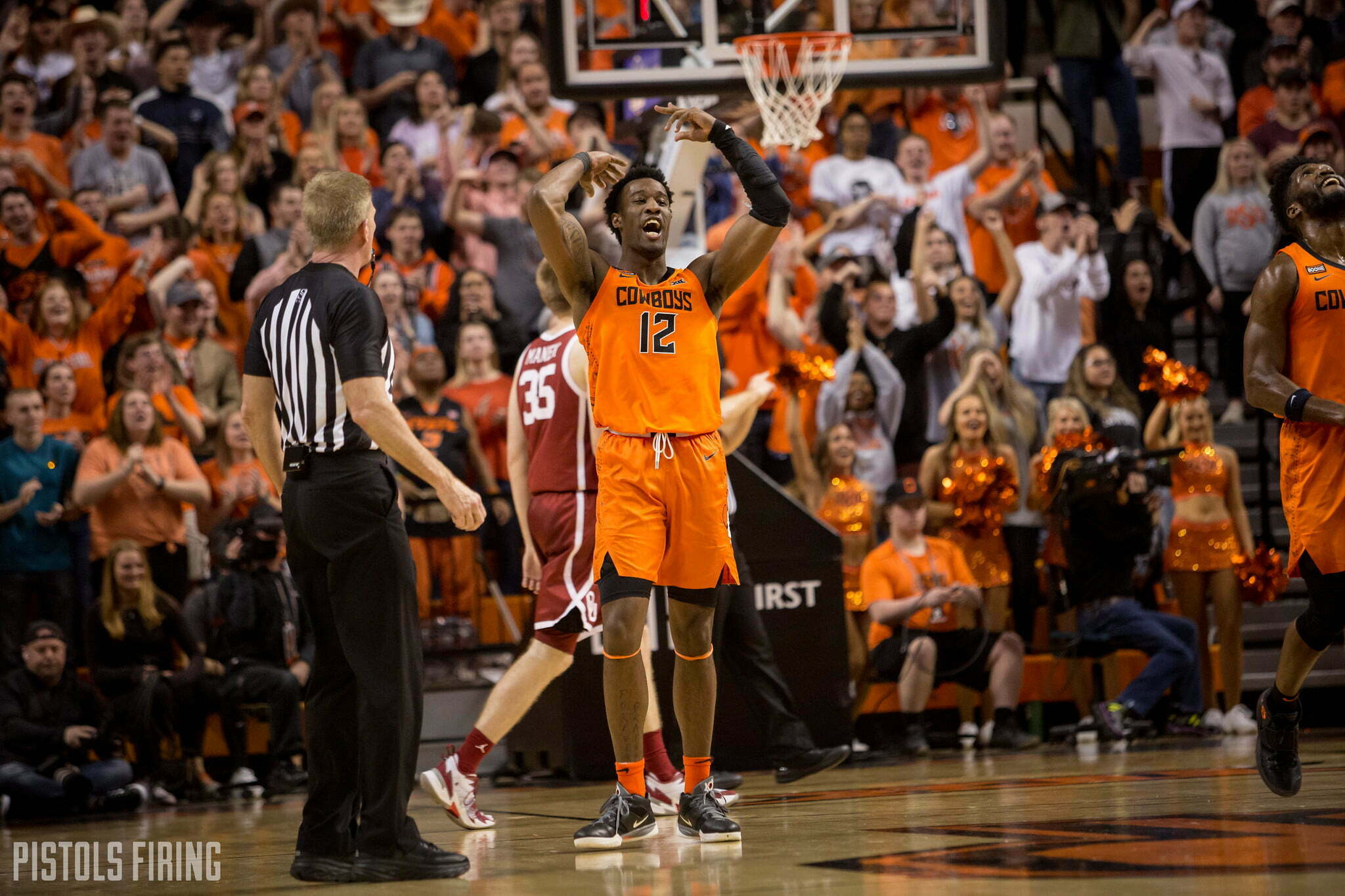 Cameron McGriff, Lindy Waters and Thomas Dziagwa said if they had the chance to return to Oklahoma State for a fifth season, it’s something they would consider.

The college basketball season came to an abrupt end Thursday. The NCAA Tournament was canceled because of the COVID-19 pandemic. The Big 12 Tournament and NIT were also cancelled, which also ended OSU’s three senior captains’ careers — or it might have.

“It’s not something I’ve really thought about at all,” McGriff said. “It’s been a lot to take in over the past 48 hours, but whatever happens happens. I would definitely put some thought into it if that were even an option.”

It’s an idea that kind of started with OSU coach Mike Boynton. On Thursday afternoon, Stadium’s Jeff Goodman tweeted out an interaction he had with Boynton where OSU’s coach said, “Seniors, if they want, should have another year. Special permission on scholarship numbers for an unprecedented circumstance. Next year only.”

Boynton expanded on his idea Friday morning in a teleconference.

“What’s the harm in letting a kid have another opportunity at college?” Boynton said. “The truth is, in basketball specifically, all kids play for the opportunity to play on the biggest stage with the most-watched event in, probably, all of sports. Maybe outside the Super Bowl.”

Boynton could seem biased in the situation. He has four seniors on his team (Jonathan Laurent included) who were major contributors for OSU this past season. But this idea wouldn’t bulk up only the Cowboys’ roster.

“I think about our kids on our team, but I also think about Kristian Doolittle (Oklahoma) and Desmond Bane (TCU) and Xavier Sneed (Kansas State), guys around our league,” Boynton said. “I watched Prentiss Nixon (Iowa State) play as good of a basketball game as he’s played all year against us because that’s what you see from seniors this time of year.”

One big question surrounding the proposal is scholarships. Division-I basketball programs are allowed 13 scholarships per team. With recruits already signed and the idea of seniors coming back, staying below that number would be almost impossible.

For example, OSU finished the year with 11 scholarship players on the roster. Cade Cunningham, Rondel Walker and Montreal Pena have also all signed to play at OSU, and Matthew-Alexander Moncrieffe is committed. And on top of that, the Cowboys are still looking to sign one or two more guys. So if all 11 of OSU’s players returned, and Cunningham, Walker, Pena and Moncrieffe also came, OSU would be at 15 scholarships at the least.

But Boynton said he isn’t after a rule change, just an exception because of the unforeseen circumstance.

“For a one-time exception, in my mind it’s a no-brainer,” Boynton said. “The kids have to want to come back. They have to want to be students still. There’s going to be some guys who say, ‘No thanks.’ And that’s OK. That’s their prerogative. I think for those kids who want to do it again, we should give them a chance. If that means we’re up to 15 scholarships next year, if somebody’s up to 19, then so what? It’s one year. We can figure it out.”

McGriff, Dziagwa and Waters spoke with reporters via teleconference before the announcement was made that spring sport athletes would be granted an extra year of eligibility. However, OSU’s three senior basketball captains all advocated that their classmates from spring sports get the opportunity to have a do-over next year as their seasons were hardly underway.

“In the boat that we were in, we got to at least play almost all of our season,” Waters said. “But if that opportunity would come then it’s definitely something I would think about.”

As a former assistant coach at Stephen F. Austin, Boynton said he feels for the single-bid conference schools. Boynton gave an example of Arkansas-Little Rock. Little Rock lost 21 games last season. With two seniors on their roster this season, the Trojans won 21 games and entered the Sun Belt Tournament as the No. 1 seed, but those seniors lost a shot at playing in the NCAA Tournament.

“I’m sure there’s some seniors on there who could’ve been living out there dreams of playing on the big stage and representing their school, their hometowns and just cannot have the chance,” Boynton said. “It just doesn’t seem right. If there’s something that we can do to help them, then ultimately I would think that most coaches got in the profession to help young people live out their dreams, do things that they might not ever be able to do ever again.”

The wait is on now to see whether the NCAA allows winter sport athletes to return and if those athletes, some of which will graduate, would want to.

“If the opportunity was presented to me, it would obviously be something I would take very seriously and consider,” Dziagwa said.