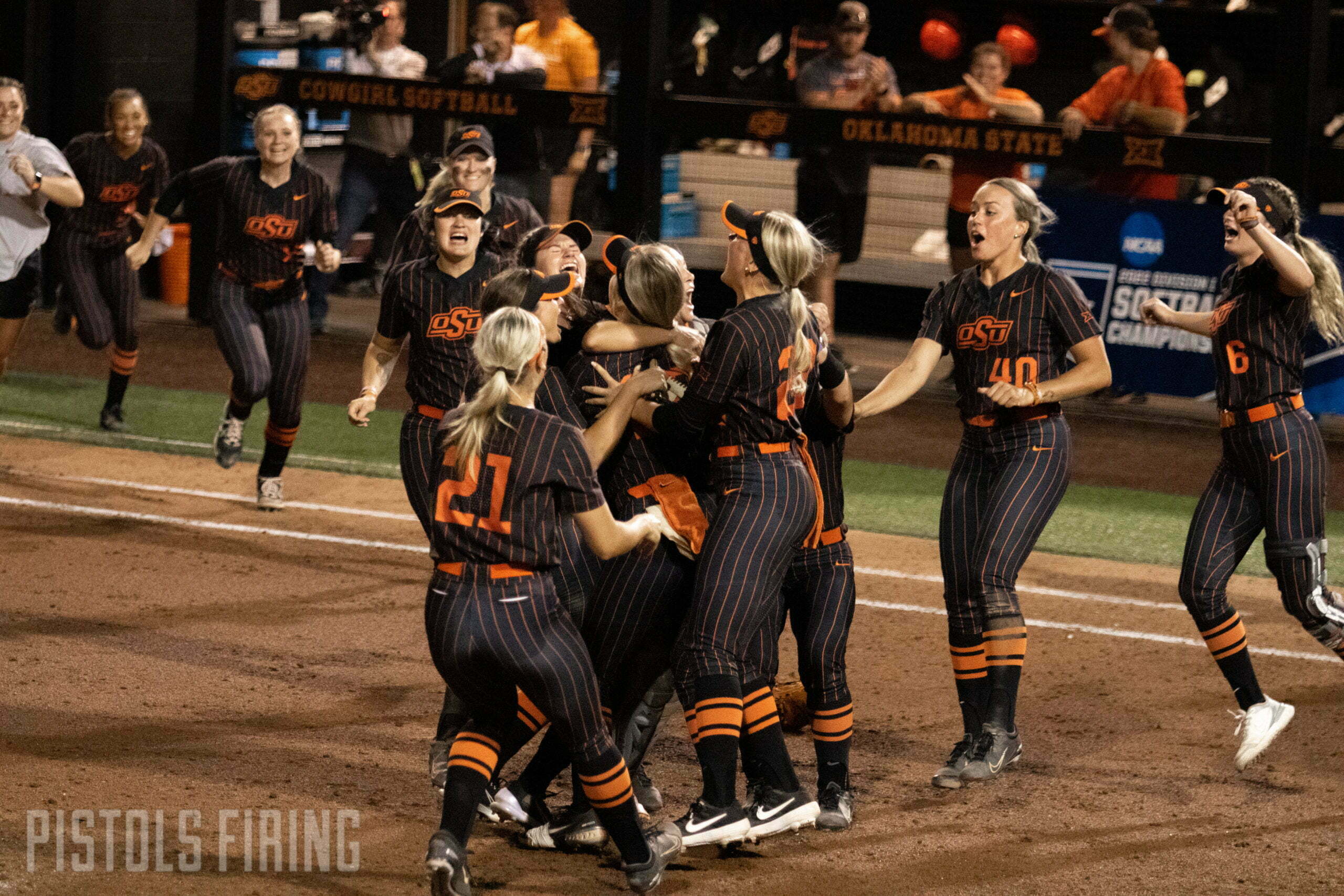 STILLWATER — For the first time in the NCAA era, the Cowgirls will make an appearance in three straight Women’s College World Series.

Oklahoma State defeated Clemson 5-1 on Friday in Cowgirl Stadium, sweeping the Tigers in the Super Regional.

“It feels good to wear that [Women’s College World Series] hat,” OSU coach Kenny Gajewksi said. “Was leaving my house here today, and I was trying to pick out a hat. I wear hats a lot, as most of you guys know, and I said ‘I’m not wearing a hat today. I’m going to get a new hat.’ That’s the new hat.”

The Cowgirls were able to put balls in play against Clemson ace Valerie Cagle and took advantage of some Clemson defensive miscues. Only one of the Cowgirls’ runs were earned. It was similar to what Oklahoma did to the Cowgirls in the Bedlam series, but this time it was OSU being the aggressor against a team’s mistakes.

The second inning saw back-to-back-to-back errors from Clemson shortstop Alia Logoleo (though it should be said, the last one could’ve been called on the second baseman).

Already defending a 1-0 lead, Karli Petty hit a grounder hard in Logoleo’s area that rolled up her glove and appeared to hit her in the face. Then Julia Cottrill hit Logoleo a groundball, and Logoleo took a half beat to get it out of her glove and make a throw to first, where Cottrill was safe. Then Kiley Naomi hit Logoleo another grounder. This time Logoleo tried to turn a double play, but her and second baseman Cammy Pereira were unable to connect. The ball ended up in right field. Petty scored and Cottrill ended up on third.

“Taking advantage of some miscues by Clemson,” Gajewksi said. “When that started happening, I just kept thinking in my head, ‘Just press the gas down and go. Let’s see if we can’t force them into more of these.'”

The errors were mercifully over, but then Chelsea Alexander did Chelsea Alexander things. She put down a bunt that scored Cottrill. The throw to first wasn’t in time to get Alexander, and no defender was within 10 feet of second base, so Alexander hustled over to it.

The final run of the frame came when Chyenne Factor grounded out, allowing Naomi to score from third. Alexander got tagged out at third after the run had scored.

Clemson got on the board with a solo home run in the bottom of the third, but Petty answered with a solo shot in the top of the fourth, her fourth home run of the season. Petty, who has been in and out of the lineup this season, finished the day 2-for-3 with an RBI and two runs scored. She also had three put-outs and three assists from second base.

“I don’t go up to bat trying to hit a home run, I was just trying to do my best to get on base for the team, and it just so happened I hit a home run,” Petty said. “But I feel like it is a big momentum changer. It gets the crowd going. It gets our girls going. So, I feel like that just helps our team keep going and keep pushing forward.”

It’ll be the first time OSU pitcher Morgan Day plays in a WCWS. She transferred to Stillwater from Illinois State this offseason. The Most Outstanding Player of the Big 12 Tournament, Day got the start in the circle for the WCWS clincher. She advanced to 13-4 on the year after throwing five 1/3 innings where she gave up one run while walking four and striking out five. Kelly Maxwell, the star of Thursday’s game, came on in relief. She struck out three of the five batters she faced, going perfect in her one 2/3 innings.

“I’m really proud of where I came from, but where I came from, admission was free and mainly the people in the stands were just parents and a couple alumni from the ’70s,” Day said. “It’s just kinda crazy. This is why I came here. The stage just keeps getting bigger, but it takes actually experiencing it to realize, ‘Wow, this is what I came here for.’ But you don’t really know what to expect until you’re actually experiencing it. It’s very surreal, and I’m trying to soak up every second.”

The Cowgirls are the first team to clinch a WCWS spot this season. Gajewski said he wants to keep coming in first.

OSU pulled off the Super Regional sweep in front of a Cowgirl Stadium record crowd of 1,384. Nothing quite says a program needs an upgraded stadium than a record crowd of 1,384. Many of those fans ended the night on the field. That group will travel down I-35 to Oklahoma City next week. The Cowgirls will start the WCWS against the winner of the Mississippi State/Arizona Super Regional. Arizona won the first game in that Super on Friday.

“That just goes to show you the Cowgirl/Cowboy family here,” Day said. “You have people that I’ve never even met, I’m sure a lot of our girls haven’t met, Coach G hasn’t met, they come and they shake your hand and they hug you like they’ve known you for years, like they’re family. That’s just how it is. The support is unreal.”