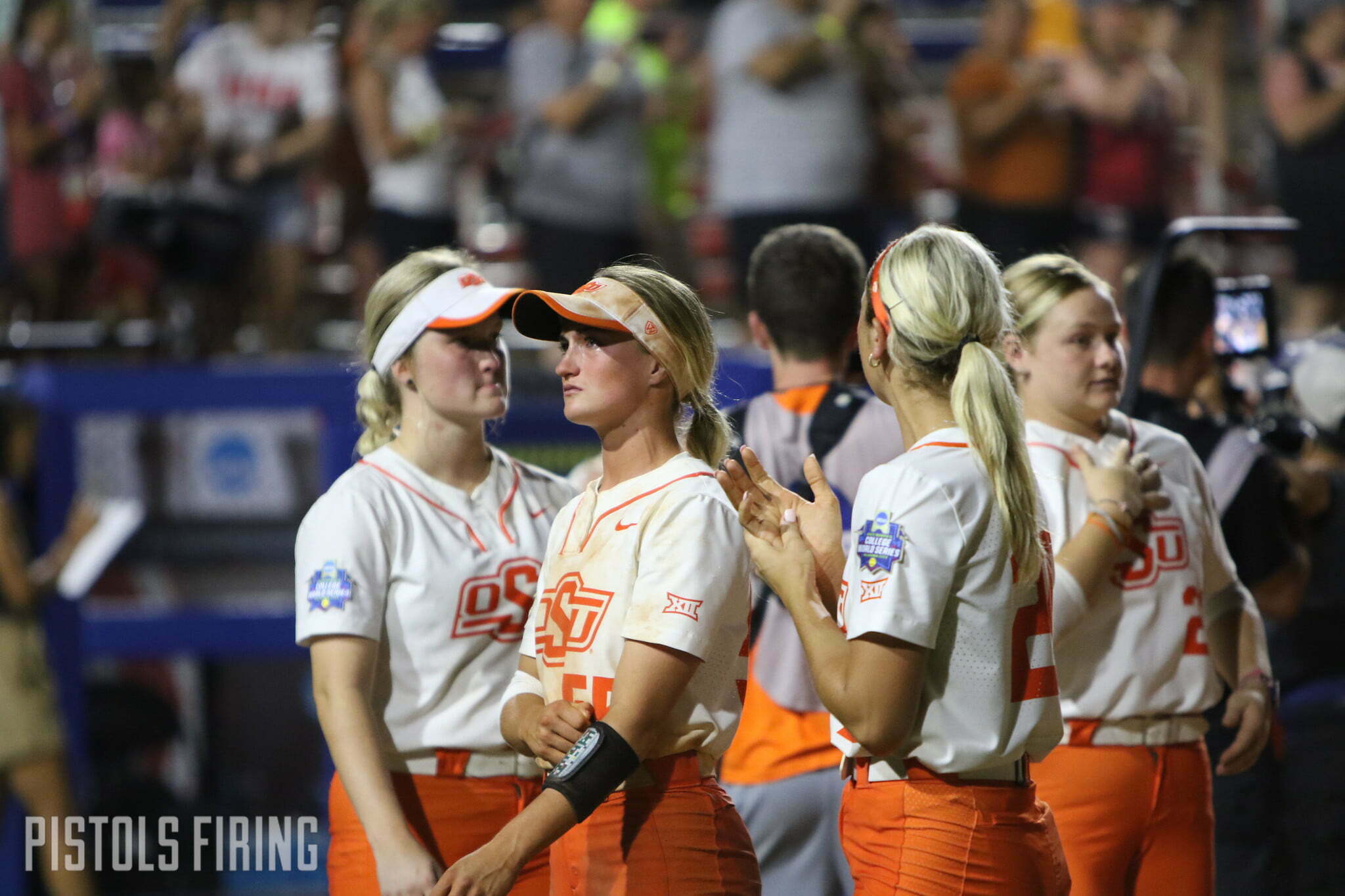 OKLAHOMA CITY — Squinky is not only alive, he is thriving.

The Oklahoma State softball team dropped a pair of games to Texas on Monday night, as the Cowgirls ended their season a win away from the Women’s College World Series’ championship series. OSU lost the final game 6-5. The Cowgirls held a lead for much of the deciding game before the inexplicable happened.

With the Cowgirls leading 5-3 (after they led 5-0), Texas got runners on first and second with one out. Bella Dayton then singled to right. It looked as if Texas’ lead runner was going to get held up at third, but Karli Petty, who has primarily played second base as of late, failed to make a clean scoop in right, allowing a run to score.

And it didn’t stop there.

Petty got it in to first baseman Hayley Busby near the pitching circle when Busby rifled a ball over to second. The throw was low and rolled all the way to the center-field wall. Not only did it allow the tying run to score, but Dayton made it all the way around the bases to give Texas the lead.

They were two of three errors the Cowgirls had Monday night. OSU entered the night ranked third nationally in fielding percentage. Squinky.

“It’s tough,” OSU coach Kenny Gajewski said. “When you have kids that care like this, it’s tough. So I would honestly rather be in this moment than not, you know what I mean? I hate feeling this. I hate feeling like this for them. I’m just really — like I told them, I’m just so grateful for what these seniors have done for us, the way they’ve continued to raise the bar. It’s going to hurt. It’s going to hurt for a long time, and it should hurt. That’s why you play. Only one team is going to hoist the trophy at the very end, so it’s going to hurt for everyone at some point besides the winning team.

“But it’s a good hurt because when you are around a lot of people who really care about each other and just trying to achieve a goal, those type of things hurt when you just fall short. Like I told them, when they’re my age, they’ll look back and go, ‘Pretty good stuff.’ But right now, a lot of tears. A lot of tears.”

The loss ends what has been OSU’s best softball season in recent memory at 48-14. The Cowgirls won the Big 12 Tournament, and it’s the first time they have won multiple games at the WCWS since 1998.

It also ends one of the best pitching performances in program history. Kelly Maxwell, pitching in her third game since Thursday, threw six 2/3 innings innings where she gave up six runs (three earned) on four hits while walking five and striking out 11. That brought her season strikeout total up to 313, the third-most in a season in program history, but again, that number looks even better considering innings pitched.

“It’s not where we wanted to finish and stuff like that,” said Maxwell, a redshirt junior. “So, I think just scratching this year, putting it behind, and looking forward to what’s ahead.”

After getting blanked 5-0 in their first game against the Longhorns, the Cowgirls started the second game of the day hot. OSU scored its five runs in the first three innings, starting with some fiery play from Chelsea Alexander, in what was her final game as a Cowgirl. Alexander singled to right center before stealing second and advancing to third on an error. Chyenne Factor then hit a slow roller to short. Alyssa Washington tried to throw Alexander out at home, but the throw wasn’t in time.

“I don’t know what I’m going to do now that I don’t get to put on a jersey and wear this logo across my chest again,” an emotional Alexander said. “It’s a really weird feeling, but also I kind of have a weird calm about me as well because we went and continued to set the bar higher every year, and so you can’t be too upset with how it turned out. We just continued to get better every year and continued to raise that standard, and can’t be mad about that.”

The Cowgirls haven’t been much of a home run-hitting team as of late, but they hammered one in the second and third.

Kiley Naomi, who had hit only five home runs on the year entering the game, crushed a two-run shot to left in the second.

Petty got ahold of one and sent it to right in the third, another two-run shot.

But Squinky struck and ended the Cowgirls season a run short of a Bedlam championship series. Still, it was an excellent year for the Cowgirls.

“I think what it does is it reminds you how lucky we are to do what we do,” Gajewski said. “It has been hard. It’s been really hard. The expectations that I put on them, probably pretty out there. When I think we’re good, I’m going to let you know we’re pretty dang good; and if we’re not, I’ll let you know the same thing.

“… Hurts right now, but I think here shortly we’ll start to go back and just remember all the ups and downs and learn and figure out how to take the next step to get to where they want to get.”