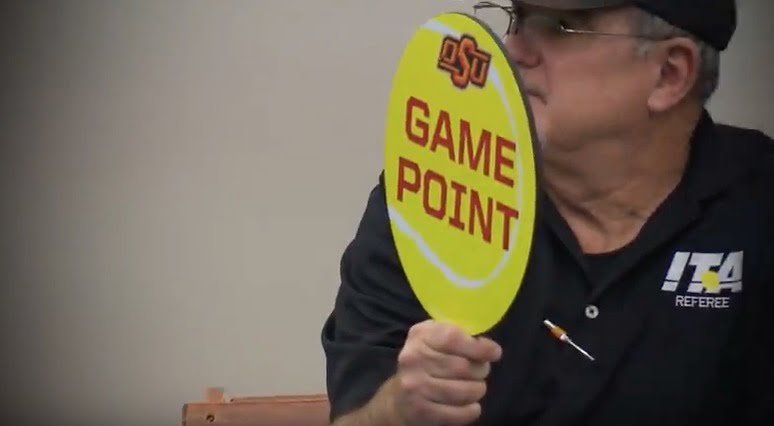 Both the men’s and women’s tennis teams hit the road this weekend for away matches for the first time this season. Let’s check in and see how they fared.

The Cowboys spent the weekend in Raleigh, North Carolina to take on the NC State Wolfpack. The unranked Wolfpack took the No. 12 Cowboys to the brink in a thrilling 4-3 OSU win.

Although already having played stiffer competition, this was by far the most grueling match the Cowboys have had this season. NC State stormed right out of the gate winning the first doubles match on court 2, putting the Cowboys immediately on notice.

Luckily, a 6-4 win on court 3 by Lukas Finzelberg and new Cowboy Artur Dubinski followed by a comeback 6-4 win by No. 5 Cash/Kadhe on court 1 gave the Cowboys the immensely important doubles point. The doubles win by Kadhe also elevated him into 2nd place on OSU’s all time doubles victory list.

Final score from Raleigh. #okstate guts out a 4-3 win over NC State and moves to 5-0 on the year! pic.twitter.com/mBxbB198ww

Although bruised and battered, the Wolfpack didn’t stay on the mat. The unfazed Wolfpack proceeded to win on three consecutive courts including a huge upset on court 2 over No. 30 Finzelberg to knot the score at 3-3. All eyes fell upon the final match between lefty Jurence Mendoza (OSU) and Ivan Saveljic (NC State). The crowd volume soared feeling the momentum shift. Mendoza, calm and collective, was able to win several huge points including a key ad point to win the very tight match 7-5, 7-5 to give OSU the 4-3 win.

Up next for the Cowboys is a three weekend set from the 10th-12th where they host Alabama, No. 2 Wake Forest, and UMKC. The match against Alabama is at 5 p.m. on Friday.

The Cowgirls, coming off an impressive ITA regional weekend in Stillwater, traveled to Tulsa to play the Golden Hurricane at the Case Center, the setting of last year’s title run. The ladies stormed out to a quick 1-0 match lead with strong doubles play wins by No. 11 Babic/Tur Mari and youngsters Ruppert/Blanco. The Cowgirls have now won an insane 39 of the last 40 possible doubles points.

Final from Tulsa! The Cowgirls move to 6-0 on the season with a 4-1 victory over the Golden Hurricane! #okstate pic.twitter.com/o6rNp2BELj

In singles play, the ladies jumped out to a quick 3-0 match lead with another impressive outing from freshman Lena Ruppert 6-1, 6-4 and senior No. 32 Carla Tur Mari 6-4, 6-2. Sofia Blanco (OSU) suffered a setback, losing on court 5 to give Tulsa its first point of the match. In recurring fashion though, Viktoriya Lushkova closed out the match with a win on court 1 and sealing a Cowgirl 4-1 victory.

Up next, the Cowgirls will travel to New Haven Connecticut to compete in the ITA National Indoor Championships of which they qualified for this previous weekend in Stillwater. The opening round opponent hasn’t been set yet, but it will assuredly be the toughest set of opponents the ladies will have faced yet this season.