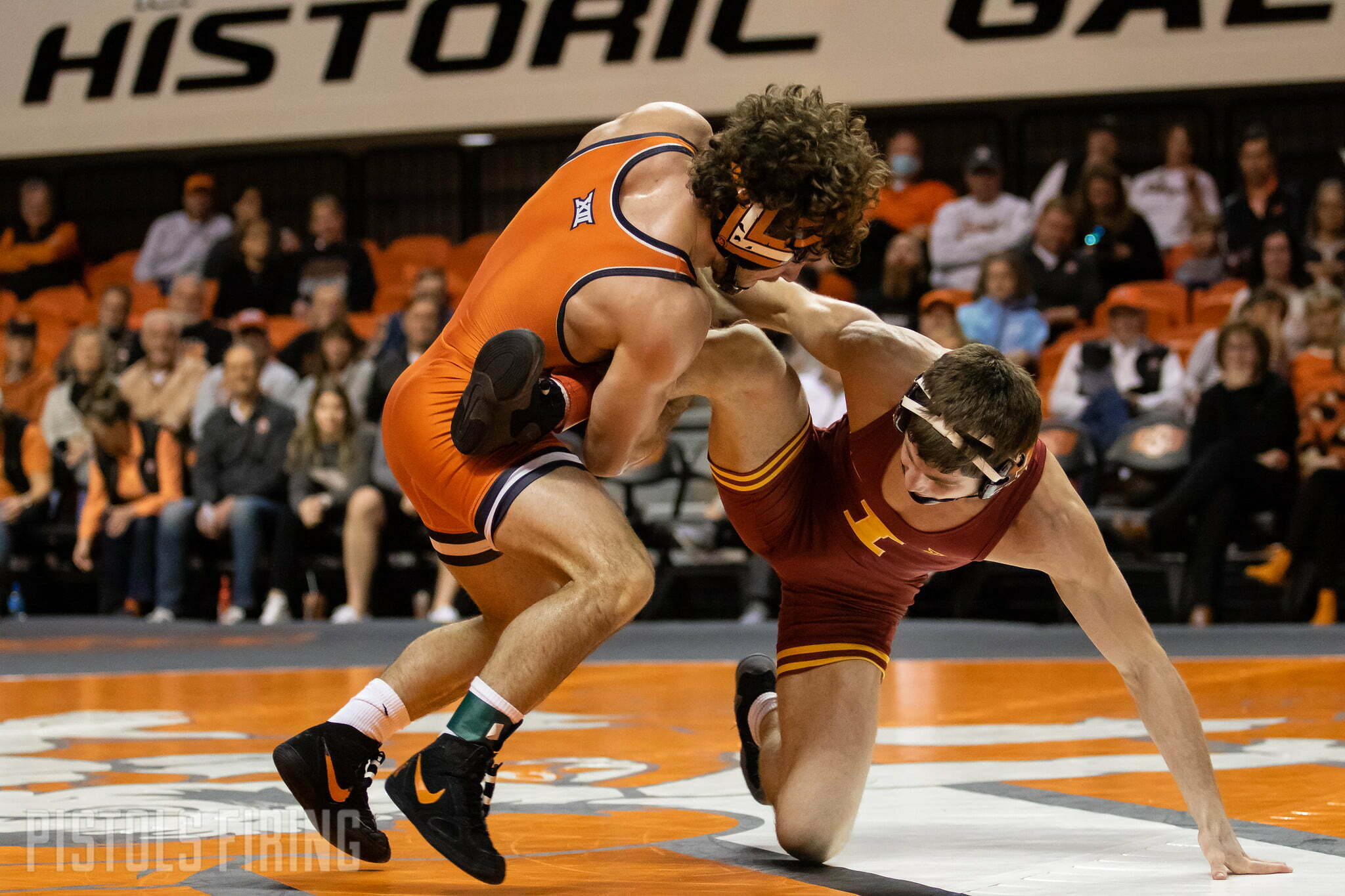 STILLWATER — One of John Smith’s constant critiques of his teams over the years involves a lack of aggression. Well, the Cowboys were aggressive Friday night.

Dustin Plott picked up the only fall of the night, pinning Sam Barnes in 1:44.

Daton Fix and Luke Surber both picked up technical falls. Fix took down Kurtis Phipps seven times en route to a 21-6 win that ended with a riding time point. Surber went into the second period with a Luke Niemeyer with a 2-0 lead. Surber proceeded to score a reversal, four takedowns and two four-point nearfalls in the second period to win 20-4.

“I think [Surber has] learned a lot, right?” Smith said. “He was a 197-pounder last year, and he’s moved up to heavyweight. When you move up to heavyweight, there’s an adjustment period. You just don’t pick up everything. You find out what you can do, what you can’t do. I think when he’s wrestled some of these smaller guys, guys that are 10 or maybe 15 pounds bigger than him, he’s had a lot more success.

“In his match, you could tell that there’s some real hope there. Like, this kid can really build into a heavyweight, a great heavyweight for Oklahoma State.”

Dakota Geer scored nine takedowns on Logan Deacetis, including five in the third period on his way to a 21-8 major decision.

The Cowboys got some potential bad news at 165. Travis Wittlake, the No. 8 wrestler in the country at the weight, was rolling around on the mat early in the second period grabbing his left knee and letting out sounds of anguish. After the trainers helped him straighten his knee out, he finished the match but was obviously limited, falling to No. 18 Zach Hartman 5-0.

“We’ll have to just wait and see what that looks like,” Smith said. “… I didn’t get a chance to see him or visit with him. We’ll just have to wait and see.”

Wyatt Sheet’s recent struggles continued Friday, as he fell to unranked Nick Delp 7-5. Delp was only 12-11 entering Friday’s dual. Sheets didn’t score a takedown in the match and was taken down in the first and third periods. Smith said after the dual that he thinks Sheets was “spooked” with a minor injury in his chest he suffered during the first period. Sheets made a match of late, scoring two nearfall points in the third period to cut Delp’s lead to 5-4 before Delp scored a reversal. Sheets is 2-5 in his past seven matches going back to the Cowboys’ dual against Lehigh on Jan. 23.

The crowd was near its loudest of the night when Gavin Stika scored a second-period takedown on Mason McCready at 197 pounds. It was part of Stika’s 3-2 victory, his second win at the weight since filling in for AJ Ferrari.

“It’s great just to see him being a competitor,” Smith said. “It does a lot of good for a lot of guys on the team. When you win and it’s really not your weight class, it’s motivating.”