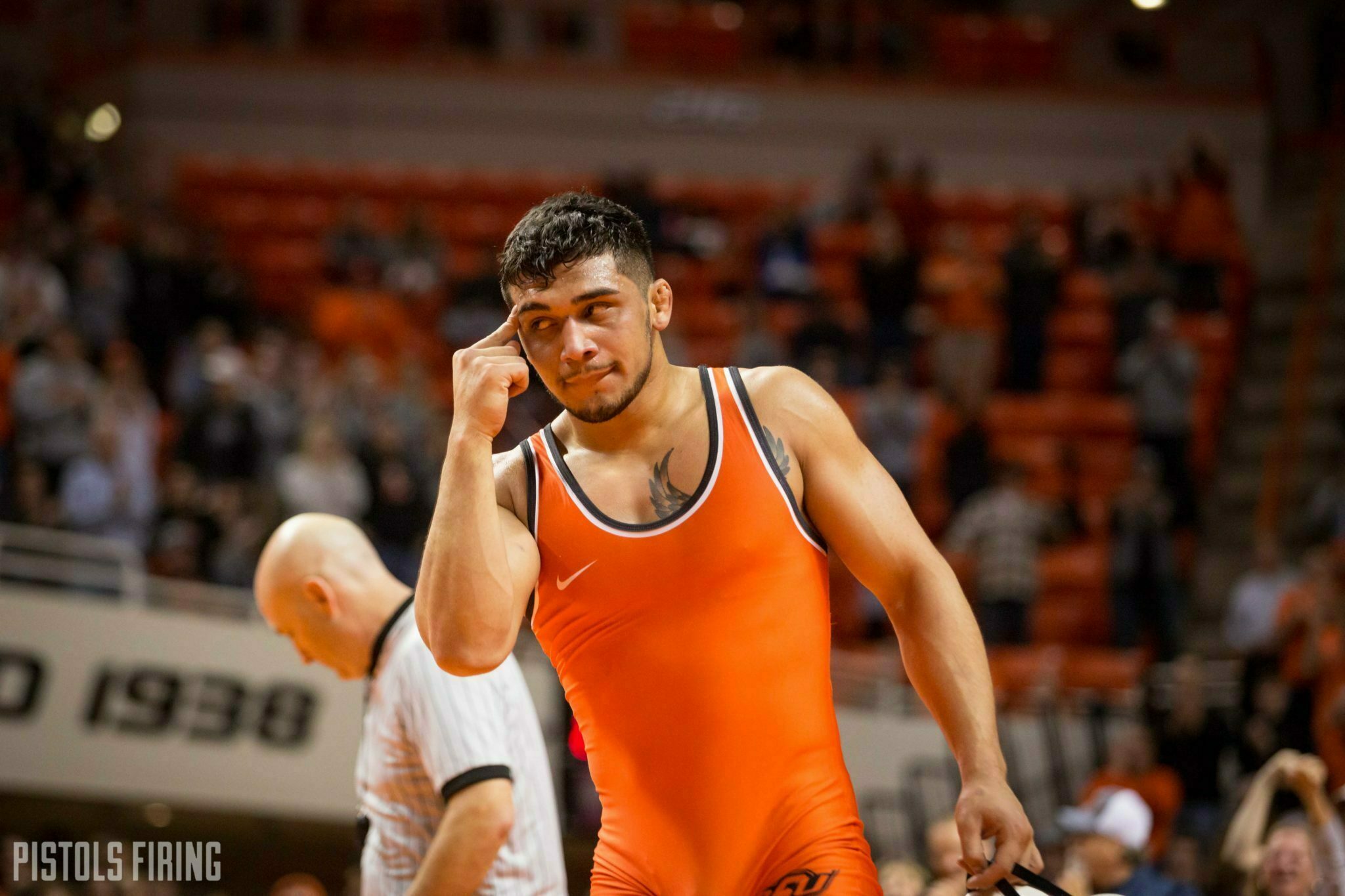 The Cowboys hammered WVU and Pitt this weekend, dropping only four total matches and really wrestling about as well as we’ve seen all year to this point. Here are my five thoughts on the performance.

1. Rookie mistakes are hurting Reece Witcraft, but upside is high: Witcraft had a nice win vs. WVU then got up big early on Pitt’s Micky Phillipi with a huge throw and nearly picked up a first period fall.

Phillipi stormed back to pin Witcraft in the second. In the situation where he was pinned, Witcraft probably could’ve bailed, given up two, and still picked up the win.

This would’ve been a marquee win for the freshman, but he still looks as though he’s building towards an NCAA tournament bid in March, barring the potential for Kaid Brock’s return at 133. If he can continue to fix some of those little things, there’s no doubt that his ceiling is off the charts and he’s a guy that most won’t want to run into in Minneapolis.

This was a big resume-building weekend for Montalvo. That Bonaccorsi win could prove to be very significant for Montalvo in securing an NCAA tournament bid. Hopefully it’s a bit of a sign that some things are starting to click and he’s going to continue this upward trend.

I’m routinely asked what their status is, and to answer everyone here, I just don’t know. I really know as much and possibly even less than some of you all on the subject. At media availabilities and other things, their status is a routine topic. After the Southern Scuffle it was put out that Hone and Gfeller would be wrestling off for 141. I don’t know how that went. After Northern Colorado, coach Smith stated that Gfeller had been sick, and during the Southern Scuffle Joe Smith did get injured. Shomers and Hone are wrestling well, so maybe they’ve just decided to go with the guys with the hot hand right now?

Understand that I wish I had more to tell you all on the subject, but injury and wrestle-off info is something that is rarely allowed out of the room, and often with good reason. So I really just don’t know on this one.

4. Heavyweights sharing duties: For the first time this season on Friday night we saw Cornelius Putnam step in at heavyweight after Austin Harris had held down the job up to this point. Putnam took an overtime loss to WVU’s Brandon Ngati and 24 hours later, Austin Harris was back in vs. Pitt. It was put out that Putnam was hurt early in the season. It’d be interesting to know if they’re giving both guys a chance to try and settle in on who will be the starter to close out the season, or what the move is here for the Cowboys. Ultimately both matches resulted in a loss.

5. Nick Piccininni gets No. 100: Pretty cool moment here. Piccininni is really the face of the program in a lot of ways right now and his pin of NCAA champ Spencer Lee last year will go down in Oklahoma State lore. Nice to see him get No. 100 in Gallagher-Iba.

ICYMI: Watch No. 4 Nick Piccininni get his hand raised for the 100th time as a Cowboy after this second period fall!#okstate pic.twitter.com/QY6YDxT05r

Watch Nick talk about it here.