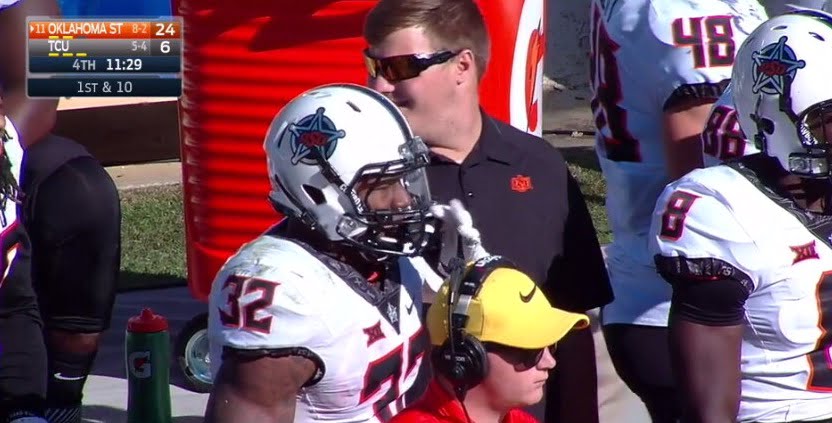 All of the things are happening. Mike Gundy’s mullet is a cape. Glenn Spencer’s defense is thriving. And the CFB Playoff back door has been propped open. As of Sunday, here are your four most-likely candidates to get into the CFB Playoffs, according to 538.

Oklahoma State is further down the list at 9 percent. Here’s how the next five look.

I’m not sure why OU’s chances are so much better than Oklahoma State’s. Wait, yes I am. Regardless, this chart is about to change a lot. Washington plays Washington State next week. Ohio State plays Michigan. OU and OSU play the week after.

So let’s shake things up and see what has to happen for us to get Oklahoma State at around 50/50 odds to get in the playoff. What if we punch in Michigan winning out, Washington losing to Washington State, Colorado losing to Utah and OSU winning Bedlam? Now if you take out the least likely of those scenarios — Colorado losing to Utah — OSU’s chances drop to 56 percent, still the best of the non-top three but also a lot more precarious.

Even a simple Washington loss in Pullman coupled with a Bedlam win gives you a prayer.

The bottom line is that these last two weeks are going to be an absolute circus. Who should you root for? Probably realistically Washington State and Michigan. If those two win this upcoming week, the Bedlam winner will *probably* get in the CFB Playoff. And OSU badly needs Washington to lose. It also needs Michigan to win the Big 10 title. You don’t want Ohio State to win and bring itself, Penn State and Wisconsin all into the playoff mix.

In this proposed Washington State/Michigan winning scenario you could still have a Colorado problem in which it is a 11-2 Pac-12 champion and could usurp the Sooners or Cowboys. So Utah winning next weekend would also be quite nice. Either Washington or Colorado winning out and taking the Pac-12 title would be real bad for OSU.

Side note: If Michigan wins this weekend and a two-loss non-conference-winning Ohio State team gets in over a Big 12 champion in Oklahoma State, Mike Gundy would do snow angels on the turf at Boone Pickens Stadium until somebody airlifted him out of there and to safety.

The best part of all of this? We don’t have to sweat it out next weekend.

May the chaos be abundant.